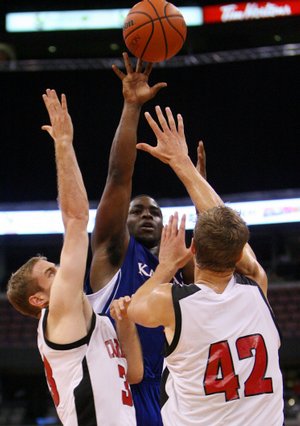 The underdog Redmen out of Montreal showed guts in racing to a 17-4 lead before succumbing to a young, equally gritty KU team that built an 11-point lead before holding on for a 72-67 victory.

"I tell you what, Dr. Naismith probably would have liked the game from our vantage point," KU coach Bill Self said. "He said this was a game 'played' instead of 'coached.' Obviously, my bench did a terrible job coaching. I didn't know what to tell our guys 'cause we haven't worked on anything."

The Jayhawks, who worked exclusively on offense during eight days of pre-Canada-trip practices in Lawrence, misfired on 12 of 14 three-pointers, while McGill drilled 10 of 29 from beyond the arc.

"That's frustrating because our guys are better shooters than that," Self said. "They outshot us 30-6 from three. Conner (Teahan, two treys) was the only one to make an outside shot. We need the Morris twins and Sherron out there making some shots for us."

Marcus and Markieff Morris didn't make the trip to Canada as they await word on their eligibility from the NCAA Clearinghouse, while Sherron Collins didn't play in Saturday's 11 a.m. game as he continues to recover from his offseason left knee surgery.

"I think our guys were nervous. Who has ever played for Kansas before outside of Cole? It's an entire new bunch out there," Self said.

Sophomore center Cole Aldrich pulled down 18 rebounds and blocked four shots while committing six turnovers in 28 minutes. He had 10 points.

"We have a long way to go," Aldrich said. "It's our first game with a bunch of new guys out there. We were really sloppy at first. We were a little shaky. A lot of guys had never played before, and it showed at times."

One of the newcomers, freshman point guard Tyshawn Taylor, helped spark a 25-4 run that erased the early deficit and, in fact, gave KU a 29-21 lead. Taylor had seven points and a steal to open that surge. Both of Teahan's threes came in that surge.

Taylor finished with 18 points off 7-of-11 shooting with four assists, four rebounds and four turnovers.

"Tyshawn was OK," Self said. "He was careless. He will be a fabulous player. He has unbelievable instincts. He's quick. He'll be terrific, but is careless now."

Taylor gave himself passing marks for his KU debut.

"I had a rough time on a couple turnovers, but think I finished well," said Taylor, who had four turnovers. "I was nervous. I can't speak for the rest of the guys, but I'm pretty sure they were as well."

"I came out and tried to give the team a boost on the defensive end," Releford said. "It's what coach says he needs me to do."

He was one of the rookies who indicated he was not nervous.

"No, I've been in this kind of atmosphere before," said Releford, who has experience playing for USA Basketball.

1st post again!!!!! Yeah Baby.Those freshmen are going to be as special as the Chalmers, Rush, Wright class. Great things to come.

The torch has been passed..RCJH

kudos to the young jayhawks, its not like they will have an easy road to victory, i mean there are great players out there who don't have ku on their chest- keep going ku players. rock chalk

What!! we had a pre season game already?wow for the first time i lost track of basketball program. Good to see stadium packed yesterday at Memorial stadium.