Brandon McAnderson did a lot for Kansas University's football team last fall, but the Jayhawks are confident they can replace the gaping hole left behind by the graduation of their leading rusher and "coach on the field."

After the Kansas football team lost two tailbacks this past week to school transfers, the feeling around camp is still quite simple - there's no need to panic. 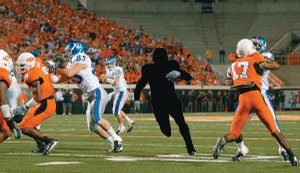 Brandon McAnderson did a lot for Kansas University's football team last fall, but the Jayhawks are confident they can replace the gaping hole left behind by the graduation of their leading rusher and "coach on the field."

Curiously, though, according to the guys whose job it will be to replace him, the nifty numbers McAnderson put up last season - 190 rushes, 1,125 yards, 5.9 per carry, 16 touchdowns, plus another 213 yards receiving - are the least of their worries.

"I don't think it'll hurt anything," said Jake Sharp, one of the top contenders for the starting running-back post McAnderson vacated. "I mean, we'll miss him. I'll miss him as a player and on a personal level. But we have other guys working hard back there. They're no slouches."

"We'll miss his yards," countered third-year junior Angus Quigley, likely the Jayhawks' No. 3 running back. "But I'd say we'll miss his mentorship more. You can get guys who can get the yards, but it's hard to replace the mentor. We're losing a guy who had been in the system five years. He knows everything. He knows the ropes, can play running back, fullback, special teams. He was a big leader."

Jocques Crawford, meanwhile, was even more blunt. Crawford, the reigning junior college player of the year, likely is the popular favorite to take the job and, well, run with it.

"It puts a lot of pressure on me," Crawford said. "You look at the status of the numbers he put up, how he helped the team, I've got big shoes to fill."

Then, after a pause: "But everyone's replaceable."

Truth be told, the Jayhawks - thin though they suddenly are at running back - should be able to weather McAnderson's graduation just fine, at least from a talent standpoint. With the bruising Crawford (6-foot-1, 230 pounds), complemented by the quick Sharp (5-10, 190) and Quigley, the tweener at 6-2, 222, Kansas has a solid rotation. Red-shirt freshman Rell Lewis (5-10, 199) also could be in the mix.

That's why coach Mark Mangino had no problem shrugging off the loss of three running backs in the early going - Carmon Boyd-Anderson and Donte Bean to transfer, and Sean Ransburg, who failed to earn the NCAA Clearinghouse's stamp of eligibility.

KU's seven-member running back corps thus was slashed nearly in half, and Mangino took it in stride.

Easing the transition to the post-B-Mac era, too, is the fact that KU's spread offense spreads the wealth among its backs, meaning no one player will have to shoulder the load.

"It's a spread offense, so as far as any individual running back, we don't want anyone to feel slighted about number of carries," said Sharp, who last season was KU's second-leading rusher with 821 yards on 147 carries and seven TDs. "We spread it around, and I think we have a diverse group with a lot of weapons."

The second piece of the replacing-McAnderson puzzle - the lost leadership - might be a bit more difficult.

"He was a great player," running-backs coach Louie Matsakis said. "It's hard to replace a guy like him because of all he did as a running back and a special-teams player and as a leader. He was a big leader, a coach on the field."

Though Sharp, a wily junior with two letters, might be heir apparent to step into that role, the job instead might fall to the true veteran of the bunch: Quigley.

A junior with a letter and a red-shirt season behind him, Quigley has had trouble staying healthy. He sat out the entire 2006 season with one injury, and he missed the first half of last year with another.

"It was a roller-coaster ride," Quigley said of last season. "There was hype, then the injury bug hit. It came at a real bad time. I was just getting into the rotation, getting the plays down, then, boom, I was out of there. But I kept plugging and got back on the field, got a few carries and my first career touchdown."

He made it back in time to play in six games. He had 17 carries for 98 yards and two TDs, numbers that might have been skewed a bit since many came in mop-up duty. "I wouldn't say I'm the forgotten man. I've been around. I know my way around," Quigley said. "It's crazy. Jake has more game experience than me, but I've been here longer. I know what to do."

What he and the rest of the Jayhawks trying to make everybody forget McAnderson can do remains to be seen.

But to hear Quigley tell it, though KU would love to have B-Mac back, the team should be able to get along just fine without him.

"We're looking strong. We have a bunch of good guys in the rotation. It's going good," Quigley said. "As a group, we're more athletic, the most athletic we've been since I've been here. We're strong."

Give Joc the Rock!

our running game will improve this year. Other teams will have a hard time stopping us.

Amazing. An article about the RB position and no mention of what a talented blocker McAnderson is. THAT is was is going to be the most difficult part of his departure to replace, if you ask me.

Blocking ability is normally almost an equal part of the running back/fullback skill set. However, in the spread offense you don't get too many blitzes because it's extremely risky. I can remember some nice blocks from McAnderson, he was obviously an excellent blocker. But in his last season, he just wasn't asked to do so as much. Neither in run blocking or pass blocking. This spread offense is just a totally different animal.I know you've all seen this a million times, but I still laugh out loud on a couple of these runs. This is what I'll miss most about McAnderson. Pure unadulterated desire.http://www.youtube.com/watch?v=Tx1VdbuHb18

Quigley is a stud and he runs hard!

I hope Sharp, Crawford, and Quigley can block as well as they can run.

I think that we will be just fine at RB. Crawford looks like the real deal on his game film and Jake should be stronger and wiser. I am more concerned at the OL. I know that Spikes is supposed to be a stud, but I have to see it to believe it. Also, I was kind of surprised that Hatch got the other Tackle spot. I will not question KU's coaching staff, I just can't wait to see them in action.

I have a feeling Jocques will be a boss.

Weren't we worried when Jon Cornish graduated ... and then B-Mac stepped up.Someone WILL surprise us ... Coach Mangino said last night that the defense was already saying that Crawford is tough to stop because he keeps his legs moving.Great break away ability it sounded like!

Not off the team, they hope he will be fully eligible in Jan. of '09

I like BMac, but I think our running game will go up a notch this year. Jake is a year wiser, Quigley is finally healthy and Joc is a specimen at the RB spot.ROCK CHALK!

"nifty numbers..."Gross. What a disgusting choice of words. I can't believe that got past an editor. "Nifty" is the worst adjective of all time and something that should've been dead long ago. Probably around the time "Leave it to Beaver" ended its run.

Don't we have this conversation every year and doesn't it always end up just fine?If there's one aspect of the game I'm not at all worried about, it's the running game.

What is the deal with the Ransburg kid? Is he still on the team or is he off? I know it says he didn't qualify, but does that mean see ya later or a gray shirt type of deal.

Yeah, I agree with JBurtin. We were asking the same thing last year when we lost Cornish and everyone was saying Oh my god, what will we do? BMac stepped it up. Now we still have Sharp, who did a good job and they're talking up this Crawford pretty good. We'll be fine. Might have to use a fullback sometimes if they don't block as well but in terms of production I think we might even be better.