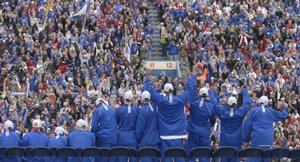 What will you always remember about Kansas University winning the national championship?

Despite the rain, despite the cold and despite a party that did not end until 2 or 3 in the morning, about 25,000 Jayhawk fans poured into Memorial Stadium on Tuesday afternoon to fete their national champion basketball team.

After watching a replay of the title game, coach Bill Self and his Jayhawk team - fresh off the plane from San Antonio and with national championship trophy in tow - came onto a stage at the center of the football field to a rousing round of applause. All the players and coaches were introduced with the loudest, most sustained applause given for Monday night's hero: Mario Chalmers, who hit the shot that forced the game to overtime.

"Over the years, these moments become mythic and legendary," Kansas University Chancellor Robert Hemenway told the crowd. "2008 means Super Mario and the overtime."

While former Jayhawk radio voice Max Falkenstien emceed the beginning of the festivities, Self took over and lavished praise on his players and the fans.

"I think I speak for our team that this is totally overwhelming," he said. "You are the most loyal, best fans. I can't imagine there's any place that's better to coach or play at than right here."

As he introduced the players and gave them an opportunity to address the crowd, most thanked the fans, coaches and teammates for all they'd done this season. Most, that is, except for senior forward Darnell Jackson.

Jackson faced several tragedies - including the midseason death of a cousin - this season.

"I'm happy I stuck it out. I think everyone here knows I almost gave it up," Jackson said. "And now we're national champions."

Replays of the welcome back ceremony for the Kansas University basketball team will be at 10:30 a.m. and 9 p.m. today (River City Weekly will be joined in progress), and at 10:30 a.m. and 11 p.m. Thursday on Channel 6. The program will also be available for one week on Video on Demand.

We need a parade!! The fans and the team deserve it! Don't half-a$$ this KU!!

A few things to get off my chest now that is has been 24+ hours since the game (my mind is finally working again)...1) That was the greatest game ever! I have seen some great KU games in my 30+ years, but this one... Whew.2) This is the best year ever. I thought 1993 was great (Bowl win, Final Four appearance, and College World Series appearance), but this season... WOW!3) Jay Bilas is one of the greatest college analyzers. He might not say what we want to hear, but he speaks honestly and factually (maybe with a little ACC bias), but at least he doesn't pull stuff out of his @$$ or is so blindly biased like some (e.g., Digger Phelps).4) For those of you that have hated Roy, and still might ... get over it. The guy gave us 15 exceptional years and he wanted to go home. He still is a KU fan. I thought it was awesome he wore a KU sticker. UNC is like the big, bully, step-brother. Sometimes it sucks to have them around, but they are family (from a historical perspective that is). A good ol' brotherly show down is what we need to fix things. There are worse schools that could have taken him (or to be constantly compared against). Sure I was hurt when Roy left, but why hate the guy? Need we forget that Self did the same thing at Illinois. It's a business. Get over it and move on. We have one hellava coach who I think will stay. Also need we forget that Brown left ... do we hate him? No! Why? Because he brought us a national championship (and helped us get on probation). Hell, I when I didn't work in Kansas, I missed home. I eventually came back, and my former employer and co-workers don't hate me. Okay, I am off on a tangent.5) I hate, I mean HATE, how the "experts" say Memphis gave the game away. Last I looked, they playrf some pretty tough D to protect their 9 point lead. They didn't just give us baskets, our players worked their hineys off to earn them. KU didn't receive much love (neither in football nor basketball), why?

Nobody can ever deny that Roy was a class act. When I saw him wearing the Jayhawk button right after we kicked UNC's behind, we should believe his sincerity in his love for KU. He wore that at the risk of alienating the UNC fan base, and yes, like it or not UNC and KU are like basketball cousins, sometimes there's love sometimes a squabble, like any family, but the two are so interconnected. The memphis game surely was big, but i think beating UNC to get there was the biggest, especially since now maybe all the Roy haters can now get over it and put him back were he belongs in our history.Rock Chalk Champion Hawk !!PS: 3 championships?? I'm perturbed that the 2 we won before the formation of the NCAA don't count...we have 5!

I second that, Strikewso. Don't take the cheap, classless way out KUAD!!!! This group of guys DESERVES it!!!!

I did a liitle research..well, actually, a lot of research and I found that for every National Champion that had a conference affliation, each team had at least one conference 1st teamer.Yet, this year's KU team which arguably could be the best team in KU history [ although it would be fun to pit them up against Wilt and the '57 squad] , did not have one starter. The balance on this team is amazing.Also, congrats to Jay Bilas who stood toe to toe with those three dinosaurs on ESPN and prevailed. Let's also remember that it was KU that wore down Memphis, it was KU that rebounded the missed shots, it was KU who made the baskets that tied and eventually won the game. So let's cut the crap about Memphis losing the game. If KU had failed to take advantage of the opportunities they would be dancing in Memphis right now!!!!

VERY well said above! As I posted elsewhere, analyzing to death why a team lost just shows that's the team you wanted to win (those announcers are still 'agonizing' about it...). But ultimately, in a few months or a year, no one except Memphis fans will remember why exactly Memphis lost--everyone else will only remember that KU won 75-68. And to watch the overtime (tie ballgame at that point): KU just flat took it away from Memphis. Our entire offense and defense was working again, the confidence and swagger was soaring, and for the game KU goes 14/15 on free throws (93%!!), which vindicates 2003 (which of course, only KU fans remember why we lost in 2003 vs Syracuse, going 12/30 and losing by 3).

Toto-the-Great, couldn't agree more! Also, Sherron Collin's aunt posted on this page yesterday and I was going to answer her, but now I can't find her post. Anyway, altho Derrick Rose did outscore Sherron, the biggest plays during the crunch time were made by Collins. His steal and ensuing 3-point shot were key in the comeback, and his 2 free throws in OT were the clinchers. His defense on Rose the last 2 minutes and in OT was stifling! Of the two Chicago guards, Sherron was clearly the tougher and the better in the clutch. KU got the better of the two! Sherron made a bad play when he tried to drive all the way to the basket with less than a minute to go and had his shot blocked, but we couldn't have pulled it out without him. Be a proud, jubilant, and celebrating aunt! He's a member of the National Champs!

spearhawk,I believe Toto meant the 1992-1993 school year with his post. The final four and the college world series were in 1993; however, the Aloha Bowl win was the '92 football season.

I was going to say what zazy said...that it was the '92-93 school year. At the time, we were the only school to have done this, but Texas has since accomplished this in '02-'03.