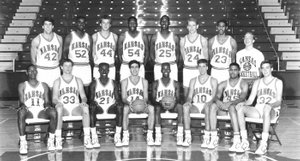 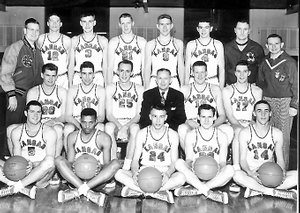 Here's a recap of the Jayhawks' previous trips to the NCAA Final Four.

KU finished the regular season with a 19-6 record and tied Missouri and Oklahoma for first place in the Big Six at 8-2. In the Western Regional in Kansas City, the Jayhawks beat Rice and Southern Cal to make it to the NCAA final, where they lost to Indiana, 60-42.

KU had three all-conference players - Bob Allen, son of head coach Phog Allen; Ralph Miller, who went on to a long and distinguished coaching career at Wichita State and Oregon State; and Howard Engleman, who wound up as the top scorer in the NCAA Tournament that year and who would become an All-American in 1941.

Kansas claimed sole possession of the Big Seven crown with an 11-1 record. Under Allen - he was in his 32nd season as KU head coach - and led by Clyde Lovellette, the Jayhawks beat TCU and St. Louis in the Western Regional in Kansas City and Santa Clara in the semifinals. KU then blasted St. John's, 80-63, to capture the school's first NCAA championship.

Lovellette, who is still the only man to lead the nation in scoring and his team to the national championship, and Bob Kenney were named all-conference. KU finished with a 28-3 record.

Phog Allen built a Big Seven champion around one returning starter, and after posting a 10-2 record in the league, the Jayhawks won the Midwest Regional in Manhattan with victories over Oklahoma City and Oklahoma State.

KU hammered Washington, 79-53, in the national semifinals, once again earning a chance to play Indiana for the title. This time, the Hoosiers won, 69-68. KU concluded the season 19-6.

B.H. Born, who was voted the most outstanding performer in the Final Four, led Kansas and the conference in scoring, averaging 22.6 a game. Born and Allen Kelley were all-Big Seven selections.

Phog Allen retired as the Jayhawks' head coach following the 1955-56 season, and assistant Dick Harp inherited the job. Harp also had a 7-foot-1 sophomore named Wilt Chamberlain. The two led KU to the Big Seven title with an 11-1 record.

The NCAA Tournament proved a tougher road. KU was assigned to the Midwest Regional in Dallas, where it beat Southern Methodist and Oklahoma City to make the Final Four.

In Kansas City, KU cruised by San Francisco in the semifinal, but lost to North Carolina in three overtimes, 54-53, in the title contest to wind up with a 24-3 record.

Pacing Kansas, along with Chamberlain, who was the Big Seven scoring champion and the NCAA Tournament's outstanding performer, were Gene Elstun, Maurice King, Ron Loneski and John Parker. Chamberlain and Elstun were named all-Big Seven.

In his seventh year as the Jayhawks' coach, Ted Owens guided his team to a perfect 14-0 Big Eight record, a feat not accomplished again until 1994, when Missouri became just the third team ever to skate through the conference unscathed.

The Jayhawks beat Houston and Drake in the Midwest Regional in Wichita. At the Final Four in the Houston Astrodome, KU fell to John Wooden-coached UCLA, 68-60, in the semifinals, then lost to Western Kentucky, 77-75, in the third-place game.

As usual, Kansas' trip to the Final Four was preceded by a conference championship, earned with a 13-1 record. KU entered the postseason 21-5 and downed Creighton and Oral Roberts in the Midwest Regional on the ORU campus in Tulsa, Okla.

The Jayhawks lost in the semifinals again, 64-51, to Marquette, then fell to Bill Walton and UCLA in the consolation game.

Featured were seniors Ron Kellogg, Greg Dreiling and Calvin Thompson, each of whom scored over 1,000 points in his career. Cedric Hunter, a junior in 1985-86, went on to set the Big Eight assist record.

Sophomore forward Danny Manning was voted the Big Eight's player of the year.

Behind senior Danny Manning, the most decorated player in school history, Kansas won its first national title in 36 years.

Manning, the Big Eight's all-time leading scorer, led the Jayhawks through a roller-coaster year to the sixth seed in the Midwest Regional.

Benefiting from a string of upsets, KU maneuvered past Xavier, Murray State, Vanderbilt and Kansas State to make it the Final Four at Kansas City's Kemper Arena.

There, the Jayhawks beat Duke in the semis and outlasted Oklahoma, 83-79, in the national championship game after losing to the Sooners twice during the regular season.

KU won a share of the Big Eight title and tied for the fourth-highest win total in school history with 27.

After beating New Orleans and Pittsburgh, KU ran the gantlet, beating No. 3 Indiana and No. 2 Arkansas to win the Southeast Regional in Charlotte, N.C., and toppling No. 4-ranked North Carolina to make the national championship game where KU lost to Duke, 72-65, at the Hoosier Dome in Indianapolis.

Big Eight champions for a third straight year, the Jayhawks entered the NCAA tourney as the third seed in the Midwest Regional.

Their first stop was the Rosemont Horizon, where they downed Ball State and Brigham Young. Then it was on to St. Louis Arena, where KU advanced with wins over California and Indiana.

Another Final Four, another matchup with North Carolina and Williams' mentor, Dean Smith.

The Tar Heels ended Kansas' tournament run in the semifinals, 78-68, at the Superdome in New Orleans.

An impressive 33-4 record featured a perfect 16-0 Big 12 Conference regular-season mark, something no league team has accomplished before or since.

The Jayhawks were ranked No. 1 nationally for four weeks and advanced to the Final Four for the 11th time in school history.

Kansas posted wins over Holy Cross (80-59) and Stanford (86-63) in the opening rounds of the NCAA Tournament in the Edward Jones Dome in St. Louis, then traveled to the NCAA Midwest Regional in Madison, Wis., and tripped Illinois (73-69) and Oregon (104-86) to reach the Final Four.

However, in the semifinal match against Maryland in the Georgia Dome in Atlanta, the Jayhawks fell, 97-88.

KU led the nation in four national statistical categories. Junior Drew Gooden was named a first-team All-American and co-national player of the year.

Ranked No. 2 in the preseason, the Jayhawks started slowly with a 3-3 record, but rebounded to finish with a 30-8 record.

KU captured its second straight Big 12 Conference championship and made its first back-to-back Final Four appearances since the 1952 and 1953 seasons.

Senior Nick Collison earned consensus All-America honors and was named national player of the year by the National Assn. of Basketball Coaches.

In its NCAA Tournament opener, KU escaped with a 64-61 victory over upset-minded Utah State, then punished Arizona State, 108-76, to advance to the West Regional in Anaheim, Calif., where the Jayhawks trimmed Duke, 69-65, and Arizona, 78-75, to reach the Final Four at the Louisiana Superdome.

KU riddled Marquette, 94-61, in the semfinals to reach the title game against Syracuse. However, poor free-throw shooting (12 of 30) proved costly and the Orangemen captured the national title with an 81-78 triumph.

Those free throws can be costly...kudos to the 07-08 Jayhawks, who significantly improved FT-shooting to a non-issue, and finally come thru BIG on the FT line in OT vs Memphis. Poetic justice, earned by our team!

KU trailed the whole game until under 2 minutes when we took the lead against Holy Cross. Fouling made it look worse. 70 to 59.