Anatomy of a big hit

More uplifting than a goal-line stand, more game-changing than a fumble, a clean-the-clock blow can fire up a crowd - and a team 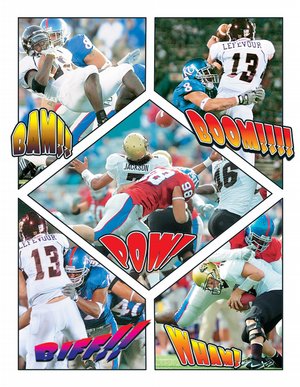 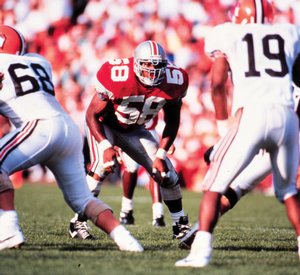 Photo courtesy of The Ohio State University Department of Athletics

Kansas assistant coach Steve Tovar knows a thing or two about jarring blows. He made his share as a linebacker at Ohio State, above, and in eight years in the NFL.

The KU football team readies for week two against an FCS opponent. Last week, Michigan lost to one of those former Division 1-AA schools, but don't expect the Jayhawks to fall victim to SE Louisiana in the same manner.

Joe Mortensen could've picked anything. The question let him go wherever he wanted to go.

Kansas University's middle linebacker was asked after last week's 52-7 victory over Central Michigan what his favorite part of the night was.

Within a second, he was ready to answer.

"Mike Rivera's hit on that screen," he said with a sly smile.

Rivera drilled CMU running back Justin Hoskins as soon as the catch was made, causing the ball to jar loose for an incomplete pass.

If you were under the stands buying a hot dog, the sound of 46,000 fans gasping and blurting "Oooh!" surely kept you in the know.

That's just what a big hit on the football field can do - make you wince and take your breath away.

Leveling a ball carrier is a beautiful thing to KU linebackers coach Steve Tovar, who knows first-hand the jolt it gives a defense.

But now that he's coaching the next generation of hard hitters, Tovar is quick to recognize that knocking someone silly needs to be a secondary perk to defenders.

"There are times when the offensive player has an advantage because he has you out in space, and you just want to get him to the ground," Tovar said.

"But if they get an opportunity between the tackles and the running back only has one way to go? Hey : unload."

The art of it

Tovar had his share of bone-crunching hits during his playing days.

A four-year starter at Ohio State from 1989-92, Tovar later played eight years as an NFL linebacker, mainly with the Cincinnati Bengals.

He had 414 tackles in college and many more in the pros. But one hit from his playing days stands out years later: At Candlestick Park in San Francisco, Tovar pursued scrambling 49ers quarterback Steve Young. They met outside of the pocket, man-to-man.

"It's hard to imagine, but in that split-second, all your fundamentals kick in," Tovar said. "I remember my coaching telling me, 'See what you hit, run through it, and keep your eyes open.'

"He was faking, and I hit him right on his chin. As I was looking at him, I could see his eyes roll back. I heard the crowd go 'Oooh!' When they carted him off, I thought, 'Man, that must've been a pretty good hit.'"

Tovar discusses a clock-cleaning lick like it's an art and stresses that going for the big hit constantly can take a defender away from fundamentals and ultimately hurt the team.

With that in mind, Tovar insists his players pick their battles carefully. Understand the field position, he explains. Understand the game situation. Understand down and distance. Preach intensity. Preach fundamentals. Unleash the hips. Rotate into the victim.

"Those type of things stick with you," Tovar said. "For a defense, it motivates the guys around you. It invigorates what you're trying to go out there and do besides just playing defense.

"You're putting a stamp on the way you play and the effort and intensity by which the defense plays."

Talib is of the belief that certain players are wired for making such startling contact - and he's not one of them.

Rivera and Mortensen sure are. So is free safety Darrell Stuckey, who jolted CMU's Antonio Brown near the sideline last week and got the trusty "Oooh!" signifying crowd acceptance.

Patrick Resby, KU's starting strong safety, says he's frequently looking to light someone up, though he acknowledges that you have to seize the opportunity instead of trying to make one.

Tovar and the KU coaching staff welcome bone-jarring hits, knowing that anything that amps the rest of the team can only be beneficial.

But remember, Tovar preaches: See what you hit. Run through it. Keep your eyes open.

And enjoy the heck out of it.

"It's a great feeling," Tovar said. "But you've always got to move on to the next play. I never played corner, but it's like getting scored on. You've got to line up and play again.

"I'm sure the other team has pride in the way they play, and they want to answer. You just have to go back to what you do play in and play out. And wait for those situations and opportunities to occur again."

Let's hope there's a LOT of those opportunities this year! Lock and Load!

And a happy gameday to all!!!! You know, I always promise myself that I'll take it easy on Friday night before a game but it never seems to happen...makes for an interesting day on the hill, though=)

Let's hope we see plenty of offense early out of our starters--I'd like to see a lot of Boyd-Anderson today (and big hits!!)

//bmc, I'm tailgating today with fabio and Jimmy_Dean ... send me a private message and we can all meet up!

I loved the 05 D, they were the best KU defense that I have ever seen. I hope this years can step up to that level and we will be in good shape! By the way I think the new offense kicks ass too.

the new offense is BEAUTIFUL!

not sure if that is because of Reesing or the new O-coord ...

After last week's blowout I'm not sure how excited I can get about this game. I'll still follow the game trax but there's not much suspense following up to kick off.

I think it's time to eliminate the D2's from our schedule. There are plenty of D1's we could have our way with. Teams like duke and temple might not be any better than se la but it would sure be a lot of fun beating them.