Jayhawk from the start

Lineman shuns Seminoles to live out dream at KU

After a stint at Butler County Community College, KU lineman Chet Hartley found his way to Lawrence, where he already has made an impact on the Jayhawks' offensive line.

Todd Reesing wasn't the only new guy that produced for the Kansas offense last Saturday. 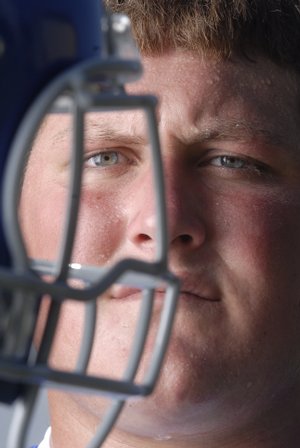 After a stint at Butler County Community College, KU lineman Chet Hartley found his way to Lawrence, where he already has made an impact on the Jayhawks' offensive line.

Sometimes, the roots run so deep that they never let you get too far away.

Chet Hartley knows the feeling. A Butler Community College lineman out of small-town Kansas, Hartley was being courted by legendary Florida State football coach Bobby Bowden a year ago. Yet deep down, he knew the tradition-rich Seminoles didn't have much of a chance.

Not over Kansas University.

"The Kansas ties," Hartley said. "That was the most important thing."

Hartley signed with KU last winter over Florida State and Illinois, getting his shot to play Division I football just 21â2 hours from his hometown of Kingman.

Hartley's story is an inspiring one, which continued last week when he started and played the entire game at right guard for the Jayhawks.

His Kingman High team went just 1-8 his senior year, and when Division I coaches combed the country looking for prospects, Hartley wasn't a guy they examined too closely, if at all.

"I wasn't getting a lot of looks, besides jucos," Hartley said. "So that was the way to go."

He chose one of the best in Butler, just an hour or so away from Kingman. There, he played left tackle as a sophomore and even worked some as a center during spring ball.

His versatility and size - 6-foot-4, 310 pounds - made him a great quick-fix option for several schools losing talent on the offensive line.

"At Butler, he really developed as a player," KU coach Mark Mangino said. "He got a lot stronger, got a lot bigger. He took well to the coaching at Butler, and I think they do a good job there.

"Junior college, for him, was a good path to take because it helped him develop. He became a bona fide Division I prospect after a couple of years there."

It fit so perfectly. Hartley comes from a family that rooted for Kansas. The Jayhawks needed immediate offensive-line help after losing center David Ochoa and guards Bob Whitaker, Jake Cox and Travis Dambach to graduation.

Hartley was in Lawrence for the spring with a starting job there for the taking. Though it wasn't all smooth, his spring went well enough to put him atop the depth chart at right guard heading into the summer.

There, he withstood competition from junior Rameses Arceo in August, starting at right guard against Central Michigan with friends and family in attendance.

"I was nervous," Hartley said, "but after getting a couple of snaps, I was good to go."

That's understandable. Hartley's journey to KU was a little longer than many of his teammates, but it still was the destination he had been eyeing for quite some time.

"When we recruited him, we were hoping he'd add some immediate help on our offensive line," Mangino said. "He's doing a good job. He's learning every day. Every day is something new for him to pick up, but he's coming along nicely."

The early timetable was that he would be back for KU's game against Kansas State on Oct. 6. It appears that's still the best guess.

"We don't know for sure," Mangino said. "We feel like he should be ready for conference play. There's a really outside chance for Florida International (Sept. 22), but I'm not sure about that. I'm not sure that he'd be ready."

Quigley battling: KU running back Angus Quigley did not dress for the Central Michigan game and was at Memorial Stadium in street clothes last week.

It was mildly surprising, considering Quigley was thought to be in position to get some snaps along with Brandon McAnderson, Jake Sharp and Carmon Boyd-Anderson.

"He's got to work his way up the depth chart," Mangino said of Quigley. "He just has to get himself back up there."

That's great about that guy from Kingman, walking away from the "paradise" of warm winters and sandy beaches is not so easy ... trust me I know!

So there's everyone's answer about Quigley, he's healthy, but something else is "wrong"

he did miss an entire season with that freak leg injury. sometimes once that happens you can't just come back and be a division I caliber football player anymore. especially with mangino's eagerness to get carmon boyd-anderson on the field in the first game of the season, I don't see quiqley's career at KU continuing, especially not at running back.

I love that we have yet another talented Kansas player on the roster. Welcome to the Jayhawk family!

C'mon Ryan, you've been writing for LJW forever now. It's the University of Kansas, not Kansas University.

I think Chet made a great decision (of course, I say that with about as much bias as possible). But, if you look at it, Florida St. ain't exactly what it used to be. Even with the hire of Jimbo Fisher, their offense looked pretty putrid in the Bowden Bowl. Come to think of it, their defense didn't look so great either. All in all, it looks as though opting to stay close to home and play for the team he grew up rooting for was a better choice than the warmer climate and playing for a former powerhouse possibly on the downslide.

If you haven't seen it yet, check out the Willie Chant or Power Towel video on Kstate sports .com. Pretty embarassing if you're a Kansan.

Just get these kids on campus and they'll fall in love with KU just like everyone else. My first visit to the hill was a 4th grade field trip. I knew then that if I was ever to attend college this would be the place.

that is an awesome story!

just how long ago was that?

I've said it before and I'll say it again, I met countless great people throughout my time at KU that were from all over the place and had NO previous ties to the school whatsoever. Most of them said that they randomly visited on a whim in the spring, took one look at the campus, and said "I'm in." We are all blessed to attend or to have attended college in such a special place. I've been fortunate enough to travel a lot, and I've seen my fair share of other school's campuses and surrounding towns and I have to admit there are only a precious few that stack up to Larry, KS.

As for me, being in-state and not wanting to go to a smaller school, I was pretty much limited to KU or K-Suck. Talk about your all-time no-brainers!!

Lawrence and Emporia ... now I am attending grad school at ESU, but just on the weekends.

So I stepped outside one morning and thought "what IS that smell?" then I remembered, "oh yeah ... that's why I didn't come here as an undergrad - the meat packing plant!"

No offense, it's a lovely place, and I'm glad to be there now, but I couldn't have done that everyday for four years, let alone SEVEN! ;)

The only place I've been to in conference that comes close to Lawrence is Ames. Beautiful place, you know you're on a college campus ... a carillon even!

Boulder has the mountains (how does anyone get anything accomplished) Austin is a state capital (imagine KU in Topeka ... um, yeah) Lubbock had beautiful buildings, but it's the middle of nowhere.

Manhattan has some decent places, but the campus is not attractive. Columbia (spent a couple summers there for workshops) isn't too bad either. I HIGHLY recommend Shakespeare's Pizza - their counterpart to Yellow Sub!

Lincoln and Waco have kind of the same problem as Austin, the campus is smack dab in the middle of town. At least with KU you know what's campus and what's city ...

Even thought I've been to Norman and Stillwater, I don't know enough to say one way or the other.

And I'm going to College Station next month!!!

I don't see anyone complaining about the uniforms after the victory Saturday. Did everyone come to the conclusion finally that it won't affect play and whining about it wouldn't change it? I'm glad. Go Hawks.

7year, I might be off a year but I think it was 1964. I know Jim Ryun was attending KU at the time because me and some of my friends thought we would get the opportunity to see him. We were waiting outside of the Natural History Museum and actually asked some students if they knew him. As kids we were in absolute awe of everything. Must of looked like the Clampett's arriving in Beverley Hills.

I think the KU campus inspires awe in just about everybody, regardless of age or background!

Royal, you're right, complaints about the unis are nearly non-existent ... they didn't look as bad as I feared, but I think I speak for a lot of folks when I say, enough with the changes, let's pick something and stay with it!

I don't know if everyone already knows this or not, but the one vote we got for the AP top 25 was from KC Star MIZZOU beat writer Mike DeArmond!!

Kingman is more like 3 hours and 45 minutes away from Lawrence. Chet is the first Division One player to come out of Kingman since 1971. He comes from a great family.

Sevenyear- I agree this place stinks, but after 15 years I've gotten used to it. I actually kind of like it now, whenever I smell it I know I'm in Hornet country! lol!

I was thinking of you as I typed that!

I hate to admit that's really what turned me off during my campus visit ... but maybe I wouldn't have hung around for seven years if I'd went there instead! haha

Sounds like we're tailgating before the game Saturday, looking forward to meeting you!!

yeah sevenyear, we have a pug and everything....'tis going to be a good time.