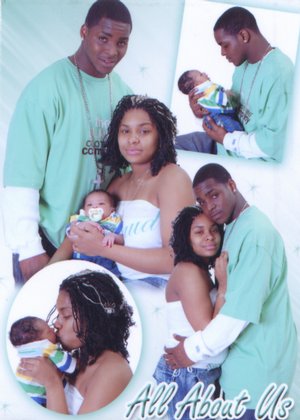 Sherron Collins enters his sophomore year at Kansas University with one overriding goal in mind.

He and girlfriend Re'Quiya Aguirre welcomed baby boy Sherr'mari Marlon Collins into this world shortly after the end of Sherron's freshman campaign, on April 6.

Collins was sporting a tattoo with his son's name on it at Friday's media day in Allen Fieldhouse.

The tattoo, on his lower arm, is one he can look at when in need of a lift.

"Before the games, when I'm doing my normal routine, I'll think about him," Collins said of his son, who lives with Re'Quiya back in the Windy City. "During the game, I need to completely focus on what's going on out there (on the court)."

Thoughts of his baby - who Sherron said is "getting bigger and bigger, he is sitting up on his own now and already crawling" - will permeate his mind pretty much every day the rest of Sherron's life.

"He's made me look at a lot of things in a lot of different ways," Collins said. "I want him to feel good about his dad. I want him to have a good life and not go through the things I had to go through. He makes me take things a lot more seriously."

Collins - he has shuffled back and forth from Chicago to Lawrence several times since April to visit his child - did not have the best relationship with his own dad, Steven, as a youngster.

"He really didn't leave. He went to jail doing stupid stuff," Sherron said. "When he was out of jail, he did things he was supposed to do for us, but he was in jail so much it was like he was never there because he went (to jail) a lot.

"We talk a few times here and there. The relationship is not where it should be," Collins added, noting his dad is doing well now with a job in Minnesota. "I have long talks with my mom. She says I have to learn to forgive and live on. I forgive him. He knows the things he didn't do.

"It hurts him more knowing how I turned out, and he wasn't really a part of it. The relationship is getting better. He still gives me advice. He is still my dad. I've got to give him respect. I love him still, but it doesn't change everything."

Collins says he's certain he will be close to his own son forever.

"It was not something we planned, but I am real happy to be a dad. My son ... I love him. He is adorable," Collins said. "I have a good family, a strong base, and I love my girlfriend a lot.

"Things have got to go on, but I miss him a lot," said Collins, who visits his son's gravesite when he can and has honored his memory with a tattoo on his own forearm that says "R.I.P. Sherron, Jr."

"Before every free throw, I look at him before I shoot."

All he can do now is enjoy every moment with Sherr'mari Marlon.

"I worked the camps all summer and saved my money, put money in the bank, so when the time comes he needs something, I want to be there for his needs," Sherron said. "Actually, his mom and grandmother said not to buy him much because they bought him too much and there's no more room. I buy him everything."

One of Collins' mentors -Chicago Crane High school coach Anthony Longstreet, who attended Friday's media day and Late Night - said it was heartening to see Sherron and his baby together.

"I was teasing him the other day. I told him, 'If you don't stop kissing that baby, you will pull the skin off his cheek,'" Longstreet said. "He can't put him down. He has a personal mission to make sure he is with his son as much as possible. I know he'll do a great job as a father because he has a great heart. Now that the season is starting, he'll not be able to see him as much. Maybe we can get the baby to come to a couple of games."

The baby has been in Lawrence before. Collins' teammates love the lad.

"Sherron is a proud dad. He's going to take care of him," junior Mario Chalmers said. "He looks just like him."

KU's coaches, who all have children of their own, have been supportive as well.

"Coach (Bill) Self was very helpful in letting me go home every other weekend when the season was over," Collins said. "Coach encourages me to be a great dad. All the coaches are supportive, and my teammates, too. They just want me to be the best dad possible. I'm determined to do whatever it takes to be a great dad."

Hey um im just askin do you think sherron having a kid will cause any problems for the basketball season. This is a question for anybody.

I don't think Sherron being a dad will have any effect on the basketball season. Sherron is not the first college basketball player to have a kid while still in school, and he most certainly won't be the last.

I agree- it will keep him focused, more responsible, grounded, etc.

I absolutely love having Sherron as a Jayhawk. My only concern is that he might declare for the draft sooner than he would otherwise, to "take care of his family."

I wish the players would keep their personal lives personal, regardless of what is going on, or what is exposed in the media. I learned way more about C.J. Giles last year than a fan should have. And him commenting on it did not make it better. Leave the rumors as rumors, even the facts as facts. No comment is the best policy for all public figures in these cases, unless they've committed a crime. And its the best policy even if the media put their mistakes on the six oclock news. Its none of our business, whether he's acting responsibly, or irresponsibly! Its his family for god's sakes. Leave him alone.

FWIW, Sherron seems like a good guy. Maybe things are as he says, or maybe this is a PR strategy for dealing with an awkward situation. Regardless, I hope Sherron wears earplugs in Manhattan and Columbia this season. I believe the fans will be alot more distracting than his son in Chicago will be. Man, is he going to get an earful. And if a PR firm did come up with this strategy, I hope no one paid much for it.

Interesting take, jaybate. I thought this simply to be a human-interest type story. I do think it will make Sherron more focused in class and on the court--and if this is extra motivation for him, so be it. It will definitely help KU, as the rotation pretty much had him as a '6th starter', and we've all seen the talk about possibly starting all 3 veteran guards on-court at the same time...all the better for us, if that is really necessary. AND, if ultimately the big exposure while at KU helps Sherron earn real $$ playing this game, then power to him and his family. I wish him well. Seems like he has the right attitude for what life has dealt him, and his statements reflect he is taking charge of whatever part of his destiny he can control.

Am I mistaken or did Dwayne Wade have a child while still in college?

He did. I'm pretty sure he was married, too.

Reading his kid's name and trying to decipher his girlfriend's name was like trying to decode something out of a Star Trek convention and listening to people 'speak Klingon' all afternoon.

Just too many consonants all slapped together with arbitrary apostrophes getting in the way. Did something get messed up during the transferral of text messages or something? Yikes.

On another note, I'm glad Sherron is dedicated to this boy. I'm sure he'll make a very good father. I was so flattened when I read about his other boy last year. What a tragic time. Seems like things are turning around for him... congrats. (minus the names) ;)

Fantastically mature comment JayCeph. I'm so happy that you have such productive, respectful, sensitive things to say around here. Not sure what we'd do without you.

good to hear from you again banner... when was the last time we talked? Hmmmm, oh never mind. I've never heard of you before.

Well, the real question is... what will we do without your poignant and cogent remarks should you choose to fade back into the ether from whence you came? I shudder to think of it. Keep up the good work.