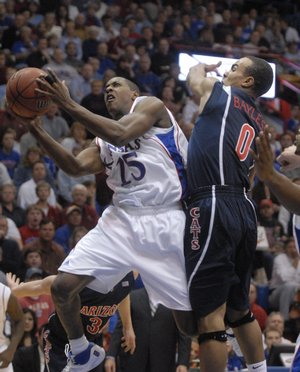 Darrell Arthur laughed hard when asked if he felt like a "hero" after Kansas University's 76-72 overtime victory over Arizona on Sunday at Allen Fieldhouse.

"No : but Brandon would have been a hero if that shot would have gone in," Arthur, Kansas University's sophomore forward, said after a game that nearly was decided on a 55-foot desperation heave by Brandon Rush that barely missed at the end of regulation.

While Arthur didn't think he did enough to unseat Rush as unofficial star of the game, his performance definitely proved pivotal in keeping KU unbeaten at 5-0.

Rush followed with four straight points, and KU had control in the extra session.

"This has been my best game," Arthur said. "I thought I played pretty well down low, but I missed some bunnies down there and had a couple of turnovers.

"Coach emphasized getting the ball in the paint more," Arthur added on a night he made eight of 13 shots and four of six free throws. He did suffer five turnovers.

"I feel good about the way we responded tonight (after squandering early 20-9 lead). We had the game under control, but we let them loose. They came back and made some nice plays. Chase (Budinger, 27 points, 10-of-23 shooting, six of 12 3s) got hot. He was a beast. Bayless got hot.

"I thought we did a good job on offense and defense in overtime. I thought we controlled the game in overtime," Arthur added of the five-minute session won by KU, 14-10.

How did KU grasp the game in OT?

I think they wanted it more b/c the crowd finally woke up in O.T.

SSS. I agree. I have been going to KU games for about 25 years, and I cannot remember a night so dead in the fieldhouse. That is untill overtime started. I was wishing every time out that the football team would walk in because I think we all needed to cheer and show support. A short speach followed by a thunderous applause would have taken care of the sad vibe everyone seemed to have. That's just what I think.

That crowd was truly sad. The preseason games seemed a little quiet as well.

I wonder if it's a trickle-down effect from the new season ticket policy, or just the consequence of having a top-10 football team during the money run of their season.

Whatever the case, we need to sort it out -- the Fieldhouse is our 6th man!

I think the crowd was emotionally spent after the football game the night before, plus a huge number of students weren't back in town yet for the game (or they forgot about it!).

it was definately a trickle down effect. i couldn't even talk yesterday because my throat was so sore from yelling at the football game. our fans are just now getting used to caring about both sports equally and we will get better at keeping both games loud in the future. the only problem we have is that the football games at the end of the season mean so much more compared to the basketball games at the start of the season. beating arizona is huge, but it didn't feel like it.

I'm in CA, so not at either game, but we completely forgot about the BB game. Just haven't been paying attention to the preseason with FB hitting the peak of the season, though there are also a few real life distractions for us.