Fans have kept faith since 1940s

'The word tailgate hadn't even been invented yet' 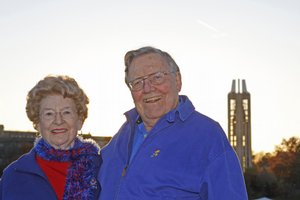 Jerry Smith, 85, and her husband, glee, 86, have been attending Kansas University home football games since the 1940s. The Smiths are pictured Thursday near Memorial Stadium in front of the Campanile.

Before tailgating and the Jayhawk mascot as we know it today - there was Glee and Jerry Smith - a Lawrence couple who have attended every home football game since 1941.

KU football team off to best start since 1899

The Kansas Jayhawks will look to improve on their 10-0 record against Iowa State in the 2007 home finale.

What are your predictions for the Kansas University-Iowa State football game?

When Glee and Jerry Smith first attended Kansas University football games, there was no tailgating, and there was no Baby or Big Jayhawk mascot. There wasn't even a Campanile.

"The word tailgate hadn't even been invented yet," said Glee, 86.

The couple met in 1941, during their junior year at the university when they attended a Greek "midweek" dance. They married two years later and have attended KU football games together ever since.

At today's final home game of the season against Iowa State, the couple plan to do what they've been doing in recent years: Hop from tailgate to tailgate, meet with longtime friends and then root for the team they hope to see in the national championship game.

This season has been more thrilling than most, with KU riding a 10-0 winning streak that hasn't been seen since 1899. The Smiths recall the 1969 Orange Bowl - "a contested loss," in Jerry's eyes - and a win at the 2005 Fort Worth Bowl.

Glee, who currently works for Barber Emerson law firm, 1211 Mass., said he's not making any predictions about the outcome of this season, but he's ecstatic nevertheless.

And while the couple are extraordinary football fans, their connection to KU doesn't end there.

While earning his undergraduate degree in journalism, Glee was editor of The University Daily Kansan and The Sour Owl humor magazine. He graduated from the KU School of Law in 1947 after serving in the U.S. Army Air Corps and then practiced law in Larned, his hometown. Glee pushed for financing higher education while he served on the Kansas Senate from 1956 to 1972 and then on the Kansas Board of Regents from 1972 to 1985. Glee also has held posts with KU's alumni and endowment associations.

When the couple were in school, fraternities, sororities and scholarship halls had indoor buffets before games, Glee said. His fraternity house, Delta Tau Delta, used to sit atop a hill overlooking Memorial Stadium, where Tau Kappa Epsilon is now. The Campanile that can be see in the distance wasn't built until after World War II.

"The whole atmosphere is quite different because it's much larger enrollment," Glee said. "When we were here, there was about 3,000 total enrollment. I never thought it would get up to 20,000."

He said when they were in school there was more of an emphasis on the homecoming parade, which was downtown, and a bonfire in South Park, which freshmen were required to attend.

"The attendance at the football games was not too great in those early days," Jerry said. "You could almost pick your own seat."

Rivalries weren't as intense back then, but KU's team wasn't as good either, Jerry said.

"We've seen them tear down the goal posts a lot of times," she said. "We aren't in favor of that, but they do it."

She said they remember "a lot of outstanding players over the years," including Tony Sands, a top-ranking player in the late 1980s .

When the Jayhawk couple moved to Larned they returned to Lawrence for games.

"A lot of the fun coming to football was taking a train that came through," Glee said. "People rode the train a lot in those days."

Sometimes they would even take a charter bus and stay the night at a hotel in Topeka with friends, Jerry said.

Jerry's Saturday game day tradition was interrupted sometimes when she was raising their three children, all KU graduates.

"We started bringing them to games as soon as they were big enough to come," Glee said.

This afternoon, the Smiths will be in section 11 of Memorial Stadium, decked out in crimson and blue apparel, continuing their tradition of rooting for the Jayhawks - win or lose.

Although Jerry said, "We're looking forward to a big win."