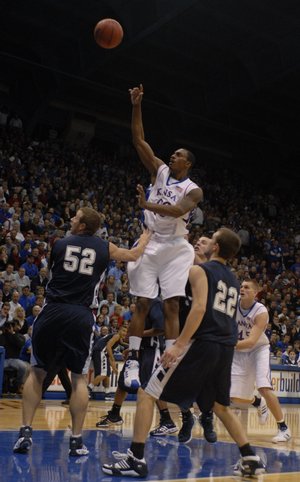 Destination Basketball: In no hurry to join the 9-to-5 rat race after graduating from college, best friends Dave Bensch and Andrew Hemminger devised a way to have fun and make money at the same time.

The two 22-year-old former Oak Harbor (Ohio) High School basketball players, who attended Baldwin-Wallace and Bowling Green universities, respectively, in June 2006 decided to interview as many college basketball coaches as possible - in person - and write about each coach in a book.

The result? "Destination Basketball: A Once in a Lifetime Adventure to Meet the Best Coaches in College Hoops," which is for sale at the Web site destinationbasketball.com.

The book includes Kansas coach Bill Self, which is why the two were in town for Thursday's KU-Washburn game promoting their book, which includes interviews with Self and 27 other mentors including John Wooden, Denny Crum, Dean Smith, Roy Williams, Lute Olson, Jim Boeheim and others.

They'll sign copies of the book with Self from noon to 1 p.m. today at the Oread Books on Level two of the Kansas Union.

"My buddy and I were shooting hoops in the driveway and thought, 'What a fun project it'd be,''' said Hemminger, who put more than 27,000 miles on his Honda Civic in a 15-month span driving to meet all the coaches.

"Chris (Theisen, KU assistant AD media relations) called us one Friday at noon. He said, 'Coach Self will meet with you guys tomorrow in his suite at the football game.' We drove 131â2 hours. We met coach Self, then went to Gates and had dinner. We were gone 32 hours - 27 in the car."

They missed connections with Bob Knight at Texas Tech, which, along with other anecdotes, is chronicled in the book.

PA switch: Brian Hanni of KLWN, host of Rock Chalk Sports Talk, worked the public address at Thursday's game. Hank Booth, who is recovering from injuries sustained in a fall at his house, missed the contest.

Slow start: KU led just 22-16 with 6:31 left in the half before embarking on a 10-0 run. Mario Chalmers had a dunk following a steal by Brandon Rush in the surge.

"Our starters didn't come out ready to play," Self said. "We were flat. We fouled at the end of the shot clock a couple of times and bailed them out. We didn't have much energy."

Better in second half: KU pivot Sasha Kaun picked up two quick fouls and missed two free throws while playing two minutes the first half. He finished with 10 points and seven boards in 12 minutes.

"Sasha made a couple of nice moves," Self said of second-half play. "A senior doesn't foul 75 feet from the basket on his second foul. The mental mistakes we make : it's just unbelievable to me. I told Sasha, 'You contributed to us getting off to a bad start just by making a boneheaded play (fouling after free-throw miss).' He played better the second half."

Notes: The Jayhawks had a season-high nine blocks, including six in the first half. : KU won its 599th game in the fieldhouse against 106 losses. : After trailing 11-10 at 11:42, KU closed the half on a 24-7 run to forge a 34-18 halftime advantage. : Conner Teahan scored eight points in the final five minutes. : Chalmers failed to collect a steal for the first time in 15 games. : KU's bench outscored Washburn, 41-21. In three wins, KU's bench has outscored foes, 103-71. :. Darnell Jackson posted a season-high seven rebounds, most in a game since seven versus Niagara on March 16, 2007.