Tigers' Miles, Crimson Tide's Saban grabbing most of the headlines 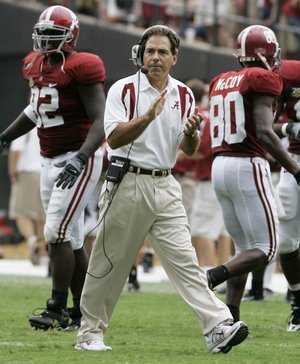 Alabama coach Nick Saban applauds his team after a score against Vanderbilt during a September game in Nashville, Tenn. Saban insists this week's visit by LSU is all about the players. 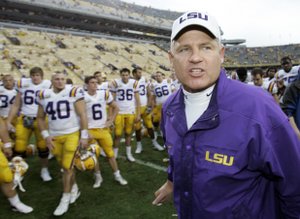 LSU coach Les Miles gets his team together after a September game against South Carolina in Baton Rouge, La.

Tuscaloosa, Ala. — This Alabama-LSU game is a high-stakes division showdown with major Southeastern Conference and national title implications, featuring a once-dominant program battling back toward the top and another trying to stay there.

Enough about that, though.

Will the coaches exchange friendly greetings before the game?

The Nick Saban vs. Les Miles soap opera will be the hottest topic until No. 3 LSU and No. 17 Alabama kick off today, despite their earnest attempts to focus on far more substantial, if less juicy, matters.

The game, for instance.

It really is a big one, and the two fiery coaches won't make a single tackle, pass or run.

"We don't blow this game up like everybody else is," Crimson Tide quarterback John Parker Wilson said. "We realize that we have coach Saban and he coached at LSU and he won a national championship there. It's just another SEC game for us. This isn't the championship for us or the last game of the year. We're just going to go play this like every other game."

It's not like every other game. Miles is trying to grab a shot at a national title of his own, maybe the only thing that would once and for all remove him from Saban's shadow.

LSU fans would like to give their former coach, who led the Tigers to a BCS national title in 2003 but later bolted to the Miami Dolphins, a take-that loss. The players have different agendas.

"We're not getting caught up in the whole coaching thing," LSU defensive tackle Glenn Dorsey said. "We know there's a big game to be played that has a lot of implications in what we're trying to achieve this year. We try not to get caught up in all the hype.

"It's going to come down to us, not the coaches. We have to actually play the game."

LSU doesn't exactly have a clear path to a national title shot, probably needing unbeaten Ohio State or Boston College - and maybe undefeated Arizona State, too - to drop a game. Alabama is the Tigers' stiffest test in the path to the SEC championship game with Louisiana Tech, Mississippi and Arkansas to follow.

The Tide is tied with LSU atop the Western Division in Saban's first season since returning to the league from the NFL.

He scoffs at the win-or-else angle as emphatically as he does the "Saban Bowl" label.

"I know y'all would like to create this as all or nothing, so if we lose the game we shouldn't even play the rest of the season. Or if we win the game, that means we're going to win them all. We've got tough games left to play."

This is LSU's time of year, though. The Tigers have won 15 consecutive November games dating back to 2002, when you-know-who was still in Baton Rouge. Their last three games have come down to LSU's final possession, including a triple-overtime loss to Kentucky and a last-second touchdown to beat Auburn.

"This game is about two quality football teams, the players on the teams and two great schools," Miles said. "I appreciate coach Saban's past and what he accomplished. The game is not about the coaches."

The game does have other intriguing story lines besides the stakes and the coaches.

LSU brings in a defense ranked in the top five nationally in five categories. Alabama quarterback John Parker Wilson is coming off his two best games, hooking up with receiver DJ Hall 24 times.

Then, there's the game's other star receiver, LSU's Early Doucet. Doucet had an open date to allow his groin injury to fully heal.

"That's my main reason for being jacked up about this game is because it's my first game being 100 percent," he said.

Dorsey also got more time to let his sprained right knee heal, though he and Miles left in doubt whether he'd play. Backup quarterback Ryan Perrilloux won't play because of his involvement in a nightclub fight near LSU's campus, Miles said. For Alabama, two starting offensive linemen and No. 2 rusher Glen Coffee are unlikely to play because the university is investigating impermissible receipt of textbooks.

The Tide easily dispatched one of its top rivals, Tennessee, two weeks ago without them. LSU and Auburn are the other two big ones annually.