‘Coach K’ as driven as ever

Despite down year, Krzyzewski says his outlook on coaching is the same as 20 years ago 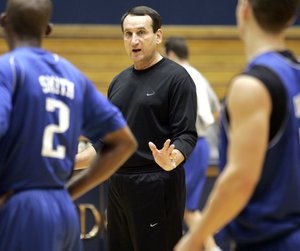 DURHAM, N.C. — For a guy best known as "Coach K," Mike Krzyzewski stopped being just a coach long ago.

As the wins, Final Fours and national championships accumulated over nearly three decades, Duke's Hall of Fame coach evolved into the most iconic figure in college basketball - with the influence to match. He's become a brand name, a commercial pitchman who is also an author, fundraiser, faculty member and adviser to the university president.

He is arguably the sport's most divisive personality, an intensely driven man who cares more about his players than how he is perceived outside his program. While beloved by Duke supporters, rival fans view him as evil incarnate. Many have bestowed his Blue Devils a villain status reserved for those teams that always seem to win.

In many ways, Krzyzewski has achieved everything possible in college basketball and is judged today on whether his teams live up to the program's lofty standards of sustained success. But in an interview with the Associated Press, Krzyzewski doesn't sound like a coach who has lost his edge or enthusiasm as he prepares for a 28th year in Durham.

"I don't know what a 60-year-old is supposed to look or think like," said Krzyzewski, who will lead the U.S. team in next summer's Beijing Olympics. "But I feel the same as I did when I coached 20 years ago. I may look a lot worse or move slower, but I don't think slower. My engine - my passion - is as great as it's ever been.

"It has nothing to do with records. ... (When) you start counting, that means maybe there's an end. I'd rather not count. Let's just live. We'll count later."

Still, the records are worth mentioning even if Krzyzewski doesn't want to take inventory just yet.

He has led Duke to three NCAA championships and 10 Final Fours in the past 21 years. He has 775 career wins in 32 seasons, 702 coming with the Blue Devils, to rank ninth all-time. He's won 68 NCAA Tournament games and tallied nine 30-win seasons - both NCAA records.

He has won 10 Atlantic Coast Conference championships to rank second behind North Carolina's Dean Smith (13) - no other coach has won more than four. All but two Blue Devils who played four seasons under Krzyzewski graduated from the prestigious private university.

Over the past decade, Duke has won more games than any school, reached a pair of Final Fours and won the 2001 title.

"I think to remain where they have been as long as they've been there ... has been remarkable," said Texas Tech coach Bobby Knight, Krzyzewski's former coach at Army and the winningest coach in men's college basketball. "They've done it in absolutely the right way. Nobody over a 20-year period has ever done it any better than he's done it there."

His program has been so good for so long that Duke's losses now generate more headlines than its victories. That happened last year when his young squad went 22-11 - the program's worst record in 11 years - and reached the NCAA Tournament for a 12th straight year.

"If I was a player, you would hold me accountable only," Krzyzewski said. "You wouldn't hold my team accountable. I'm OK with someone saying, 'Coach, you didn't do as good a job.' My team actually did a pretty good job, but not in comparison to that standard. ... A team can suffer a little bit from what's expected of that coach. And I don't want that."