It started with a crowd of two.

John Coleman and his friend, Don McCoy, both from Bonner Springs, were the first to arrive at Allen Fieldhouse at about 3:30 a.m. on Sunday morning.

They waited for the recently-defeated Kansas University basketball team to arrive from San Jose, Ca.

"We planned on celebrating the rest of the night, but that didn't work out," Coleman said. "So we've been sulking."

But for McCoy, who had made it an annual tradition to welcome the Jayhawks back to Allen Fieldhouse, said a defeat to UCLA was easier to handle than the first-round exits the team and its fans suffered the last two years.

Fairly soon, a crowd of about 100 sleep-deprived fans braved the early morning hours to wait outside Allen Fieldhouse and applaud the return of the KU basketball team.

The team rolled into the south parking lot behind Allen Fieldhouse around 4 a.m. after landing at Forbes Field in Topeka.

The decision to come see the Jayhawks arrive back into town was one Karen Suddath and her daughter, Hannah Wallace, made before they knew the outcome of the game. 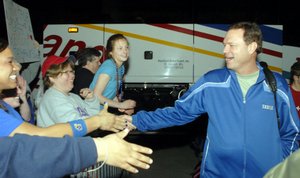 The Jayhawks returned to Lawrence around 4:00 a.m. Sunday morning while a crowd of 50 loyal fans were there to greet the team. Coach Bill Self was the first to get off the bus while he walked near the crowd extending his hand for thanks.

"We decided we would come if they won or not," Suddath said. "Because they had a wonderful year."

The two came early on Saturday from their home in Kansas City and got a hotel room in Lawrence for the night.

After a couple hours of sleep following the game, and a can of Red Bull for Wallace, it was off to Allen Fieldhouse.

Fans waited outside Allen Fieldhouse, as fans weren't allowed inside as they had been in previous years.

Suddath said she expected more fans to show up.

"I thought there would be hundreds of people," she said, glancing around and the slowly forming crowd of well-wishers.

McCoy thought the crowd's size was understandable, given the circumstances of the team's late arrival. 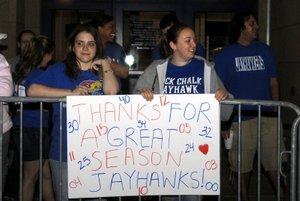 KU students from left, Andrea Dater and Paige Nicely made a quick sign to welcome back the Jayhawks at 4:00 a.m. Sunday morning while a crowd of 50 faithful fans were their to give the 'Hawks a warm welcome.

Players and coaches filed off the team's charter bus and made their way straight inside the Fieldhouse. Some exchanged smiles and nods with fans, but did not speak with them on their way into the building.

Stephanie Thompson, a KU freshman from Shawnee who came back to Lawrence from her spring break to watch the team come back to town, said she wasn't miffed that the team wasn't able to talk to fans.

"It's kind of understandable, I guess," she said. "It's probably a lot harder on (the players) than people realize."

Never the less, it was worth the wait for Thompson and her friend, Whitney Worthington.

"I think they really appreciate any kind of support," she said.

33-5, good season guys. There are a lot of teams that would kill just to have made it this far. There is always next season. Next year will be 20 years since we last won the title. Nice even number to make another run at.

I was very hurt over the loss. But, we have had a great season and it was a lot of fun to watch the team. And I am already looking forward to next year. I sure would have loved to have beat UCLA. We were kicking their butts, our shots just wouldn't fall. It was a super great season, thanks for it. Next year we take it all. We are winners, 33-5 is a great season. I would rather lose as a Jayhawk than win with any other team. Thanks again for a great season.

Great season hawks! I loved watching all you guys play and screaming at the tv when the refs were stupid!

Thanks and good luck next year!

Don't get me started about yelling at the TV because of the refs. Been there done that and will keep doing it.

Oh yeah...can't wait for next year. Why? Does someone honestly think we will win it all next year? LOL!!!@

APDJayhawk -- Yes, I honestly believe we can win it next year. Especially, if everyone returns.

GREAT SEASON HAWKS!!!!!!! can't wait till next year so we can win it all...the refs sucked last night..anyways!!

akbspock sums it up...I'd rather lose as a Jayhawk then win with any other team!!!! And to all who doubt next year because that's what we say every year...obviously they haven't really been paying attention this year! Next year should turn out to be the best year ever!

I agree with akbspock...I'd rather lose as a Jayhawk as well...especially since that's all we have known in the post-season the past 19 years. And to Hawkitup...I appreciate your optimism, but it's just not based on any kind of reality

APDJayhawk ... what's with all the negativity? It seems like you are just resigning yourself to losing! What's the point of that? Do you ever hope to win again or do you think we should just settle for the championships we already have and call it quits? Hey, those banners are beautiful ok! But wouldn't it be great to hang up some more in the future years? We have some great guys and they are going to do it before it's all said and done. Come on man! Believe in our guys and back them up. Man, I live by the Jayhawks and I die by the Jayhawks. I feel beat up and dead right now but come mid-October, ain't nobody gonna be as alive as me! ROCK CHALK JAYHAWK 4 LIFE!!!!

And come October, you can relish in the Hawks regular season success and swallow that bitter pill called failure in March. Just like the last 19 years. Roy Williams is 13 minutes from taking North Carolina to it's 2nd Final Four in 4 years. I can only imagine how heart-wrenching it's going to be for most KU fans when he wins his 2nd National Championship in 4 years with that team! But let's keep singing the praises of Bill Self!

News flash APDJayhawk...UNC LOST! Not only did they lose, but they had a substantial lead and BLEW IT! You are not intelligent enough to argue with so I am going to just tell you that you are wrong. Most schools would kill to have seasons like we have. I was in Arkansas for spring break and the only questioned that I was asked by the locals about KU was, "How does it feel to have a winning team every year?" That pretty much sums up my pride for my school.

APDJayhawk ... it must really suck to be you.

UNC lost and Roy Williams is going home...so much for that prediction APDJayhawk! HAHAHA!! Can you feel the "heart-wrenching" now? =)

By the way, the FACT that I believe we can win a National Championship next year IS based on reality. Look at the talent we've got coming back. It doesn't matter if we didn't get the job done this year. Experience pays off...look at UCLA.

Maybe we should hire you as coach since you know so much.

Such Roy haters out there! I guess he still has a little bit of Kansas left in his system! LOL! Hey Hawkitup...does it get old saying the same thing year after year after year? Believing Kansas can win it all NEXT YEAR?
Misery does love company...I shouldn't have expected any kind of class regarding Roy

Hey, Roy is the same old Roy. He only won that one time cause Daugherty had recruited all those guys. Roy will never win another championship. My God, he does the same thing at UNC that he did at KU. Lose big leads and go home early.

UNC hit just 2 out of 22 in the last 8 minutes of that game today. It happens to the best of them

And Kansas missed over 20 shots from within 10 feet...the eerie connections between Kansas and Carolina continue!

I really don't know why I am perpetuating APD's dumb@ss remarks, but I do have to correct him about two things...

Its not 19 years, you idiot. If you were really a KU fan, you would realize that we couldn't compete in the postseason in 1989 because we were on probation for recruiting violations. So either you didn't know that, or you can't count. Its 18 postseason years without an NCAA title. (I forget, how many NCAA Tournament titles does everyone else in the conference have?... oh yeah, OSU has 2 in 1945 and 1946...anyone else...no...okay then APD can shut the h up.)

Doesn't the Big 12 (Big 8) tournament count as postseason play? If it does, then your comment about 19 years (which I have already commented on) is even more ridiculous. In those 19 years, KU has won 6 conference tournaments and been the regular season Champions or Co-Champions 12 times.

I'll admit, I had to look that up. Wikipedia has great write ups on the Big 8 and the Big 12. You might go see it. You have to go back to the old Big 8 and 1994 to find Mizzou on the regular season Champions list and 1993 for the Tournament Champions. You don't see KSUck anywhere between 1988 and now. How does that feel?

Great Season Hawks! Hopefully the rest of the Big 12 will start pulling some weight in the not too distant future so we can get some respect and be more prepared for the post season. Maybe we could think about scheduling some more heavyweights in the non-conference season as well. As I said though, great season! I look forward to more great things next year.

Wow RalkChalk..thanks for your insight. You are right...we couldn't participate in the 1989 post-season thanks to Larry Brown. So that 1988 Championship was more expensive than it was for 99% of the other NCAA Champions in history. However, it's still been 19 years...if you prefer fuzzy math, get into politics.
And you want to compare the number of NCAA Tournament Championships with other members of the BIG 12? Are you an idiot? Kansas is the 3rd winningest program in history behind Kentucky (7 Championships) and North Carolina (4). Indiana and Duke have more than Kansas as well. We have 2...so does San Francisco, Cincinnati and N.C. State.

And now you want to compare conference regular season titles and conference tournament titles to the BIG DANCE? You want to compare competing against the other BIG 12 schools, which you trashed earlier in your post, to competing against UCLA, Kentucky, N. Carolina, Duke? Which is it pal? Either the other Big 12 school sucks, as you alluded to, or we should be so proud to be beating them in tournament?

YOu are obviously an idiot.