San Jose, Calif. — Awash in a sea of fans clad in baby blue - and, more importantly, an opportunistic lineup of sharp-shooting UCLA Bruins - Kansas fans once again are headed into the offseason with a postseason loss, this time one win away from the Final Four.

The Bruins from Southern California topped the Jayhawks, 68-55, Saturday at the HP Pavilion in Northern California, leaving disappointed KU faithful wondering what comes next.

"Well, if it's not this year, it's definitely next year," said Amanda Murtaugh, who grew up in Lawrence and now works in San Francisco.

Kylie Smith, who left KU as a junior in 1997 to hit the Bay Area at the height of the dot-com boom, figures all major players on this year's team will return and lead the Jayhawks to new heights.

"We regroup," said Smith, who also grew up in Lawrence and now works in finance. "We'll get it next time." 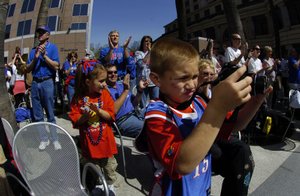 KU fans congregating in San Jose for the NCAA Tournament's western regionals knew they were in for a tough fight.

All top four seeds had advanced, and despite KU coming in with the top spot, that didn't equate to a win.

Nathan Padia knows the feeling. His Lawrence High School Lions were the top seed in their substate when they lost in this year's final to Leavenworth.

In San Jose to follow KU, he said he could sympathize with the team - all while maintaining steadfast confidence in the Jayhawks' future.

"We're going to be a force," Padia said. "If all of them stay, and we get some good freshmen coming in, they'll all get better. I like them even better for next year."

I'm beginning to realize how much we sound like Cubs fans (of which I am one as well): wait til next year. Sigh.

Maybe the problem isn't that we have to keep saying it, but that we equate the ultimate success of our program with the one variable of winning the national championship, as if it's something that is easy to do or should be readily obtainable. Chill out.

Except for you cyclelust. You're just trying to get a rise out of the emotional folk, and I just feel sorry for you.

You're right, jonas, that a National Championship is hard to get. There are enough high quality teams that, before the tourney started, no team in the country had even a 50-50 chance of reaching the Final Four. We almost made it.

And I don't think the phrase is, "wait till next year." It's, "great year, and we look forward to next year."

Well put Tuskin and jonas, I love the hawks, but we just got flat out beat last night. I give UCLA credit. They defended our screens extremely well and played great help defense. I think that once again we didn't have a guy who wanted to step up. I saw the "extra pass" too much last night. Instead of taking the ball strong we would try a fancy pass and end up with a turnover. Great season Hawks!!! There are only eight schools who can say they made it to the Elite 8 and we are one of them. Congratulations Hawks!!!! Welcome home!!!

I still maintain that the only team in the country that can beat Kansas is Kansas.

We had a great season this year. I always say myself "Wait till next year". But what happened to this year? This was the year to go all the way and next year will be to. If the players that think there good enough to move on deside to stay. NOBODY on our team is ready for the NBA. I love KU basketball. It is pretty much the only sport I like to watch. I hate that I have to wait till next year to see them play. We have the best basketball team in the Nation. We just can't prove it every game. Maybe if we work on that, history will be made.

Wait 'til next year? What is wrong with you people? Is there a KU fan out there that isn't tired of saying that for the past 19 YEARS??? The 3rd winningest program in history has 1 championship in the last 20 years...2 in the last 56 years? Being a KU fan means understanding the reality that post-season success is limited. Enjoy the regular season Jayhawkers cuz that's all you can hope for.

Am i upset that this season is over? Sure, but....not that KU lost to UCLA in a very good game. But why did Kansas NOT change its offensive set? everytime down the floor it was ball screen ball screen and another ball screen....at what point did they think UCLA hadn't figured it out? But only making 50% of your bunnies wont let you win many games either.

I will be waiting for NEXT year!!!

No one feels worse about this loss I'm sure than the players and coaches. They did beat themselves, and had they made only half the layups they missed they would have won by a landslide. I was not impressed with UCLA the first half, and if Afflalo hadn't come out of his 5 game slump yesterday, we'd be on our way to Atlanta. Florida will take them again. hahahahaha....we beat Florida :)

Oh yeah, and the AD of UCLA was on the selection committee. Plus, did you all know UCLA is undefeated when playing the NCAA tournament in California? hmmmmm.....I'm thinking had we been playing them in St. Louis things would be a little bit different.

Great year~look forward to next one!!!!!

oh, and cyclelust....pity for you dude. Must really suck to have such an empty life that you need to harrass strangers on message boards.

It's funny that most people bad-mouthing KU are K-State, Missery, or WSU fans. Where were those teams? Oh, yeah. NIT or nothing :)

Wow Confrontation...incredible insight! You should be added to the coaching staff next season.

uh, not with trolls.

ROY OH ROY ... WAS ON SELF LIKE A DOG LAST NIGHT BUT CAN NOT STAND THE ROY SNIFFERS APD MOVE IN WITH ROY
WHAT NEEDS TO HAPPEN IS HIRE LIKE NFL OFFENSE AND DEFENSE ASSISTANTS ROY NEEDS DEFENSE CO ORDINATER SELF NEEDS OFFENSE BOTH ARE GOOD COACHES BE HAPPY WITH WHAT YOU HAVE AND WOULD BET YOU SELF WILL WIN US THE BIG ONE LIKE ROY NEVER DID

KU never could get on aroll this year, BigXII wins are a dime a dozen as this is a flat out weak conference. KU to win the NCAA had to go 6-0 against increasingly more talented teams. The Hawks could nto step it up and were lucky to have a great game agaisnt Niagra and Kentucky and average game against SIU and UCLA.

Rush looked good, but CHambers and Wright did not show up against UCLA. The others were a mixed bag. Basically, an average KU game. Good enough to go 14-2 in BigXII, but only 3-1 in NCAAs!

pzg5g1.. well Carolina,Duke, and Kentucky will not be hanging any banners and no one will ever catch ucla so all those dukies, royboys and kentucky cheaters smooch smooch

one last thing KU - North Carolina Final next year so be ready....

ROY OH ROY ... WAS ON SELF LIKE A DOG LAST NIGHT BUT CAN NOT STAND THE ROY SNIFFERS APD MOVE IN WITH ROY WHAT NEEDS TO HAPPEN IS HIRE LIKE NFL OFFENSE AND DEFENSE ASSISTANTS ROY NEEDS DEFENSE CO ORDINATER SELF NEEDS OFFENSE BOTH ARE GOOD COACHES BE HAPPY WITH WHAT YOU HAVE AND WOULD BET YOU SELF WILL WIN US THE BIG ONE LIKE ROY NEVER DID"

Man I love all caps posts. Those rule.

KU has one of the most talent laden teams in the nation and Self still can't get past the Elite 8. Maybe he should just stick to recruiting and let one of his assistants write up the plays, because he sure doesn't coach very well.

Well, it seems Ol' Roy still has Kansas in his blood after all! Classic Kansas post-season meltdown dressed in Carolina Blue! I love it!