Bill Self snipped the last four strands of net and forcibly tore the twine from the rim, putting the finishing touches on a joyous celebration Saturday afternoon in Allen Fieldhouse.

One by one, Kansas University's basketball players and their coach savored a tense, 90-86, come-from-behind, Big 12-title-clinching victory over Texas - first by watching a highlight reel on the center videoboard, next by accepting a trophy from league commissioner Kevin Weiberg and finally by the traditional ladder-climbing at the north goal.

"Cutting down the nets is great and all that stuff," said fourth-year KU coach Self, who proudly watched from near the bench area as 14 players preceded him skyward. "It will mean a lot more if we have a couple more net-cutting ceremonies before we're finished.

"It's not how it is here and not how it is with me," he added of settling for conference crowns. "We've got work to do. Now the work begins."

"I thought he'd get 50 on us the first half," gasped Brandon Rush, one of five Jayhawks to try to slow Durant, who also was guarded by Julian Wright, Darrell Arthur, Darnell Jackson and Rodrick Stewart.

At halftime, it looked as if Durant were a sure bet to surpass K-State's Mike Wroblewski as top point producer by an opponent in fieldhouse history.

Wroblewski scored 46 against the Jayhawks in 1962.

Instead, Durant - who missed four minutes of the second half after spraining his ankle (Texas trailed 71-65 when he left and 79-72 when he returned) - was held to seven points off 3-of-8 marksmanship the second 20 minutes and finished with 32 - not even a top-10 mark versus KU in its tradition-rich building.

The Longhorns' 11-of-14 three-point shooting and overall 57.1 percent marksmanship - at one point UT hit 12 straight shots - actually made the Jayhawks, who trailed by a game-high 16 points at 51-35 with 2:41 left in the first half, feel fortunate they weren't down by more.

"I was smiling the whole time. I said, 'Man, this can't be happening,''' junior guard Russell Robinson said of the first-half blitz. "But you knew : you just had the feeling they'd go cold."

The hot-shooting Durant was a hot topic at halftime.

"The only thing we were thinking in the locker room was, 'Durant is making every shot,''' said junior Darnell Jackson, who had four points and two rebounds in eight minutes. As a team, KU outboarded the Longhorns, 42-32. "I've never seen anybody come into the fieldhouse and play like that."

Self, who hoped "the law of averages would play out," made sure his players didn't panic over the uncanny UT shooting percentages.

"Coach was like, 'Calm down. It's only one half. We've got the whole second half left.' We knew we could come back," said Rush, who scored 15 points, eight the second half.

Of course, to come back, the Jayhawks had to work a bit harder on stopping Durant.

"Coach wasn't down on us as much as telling us to play better defense," said Wright, who had 13 rebounds to go with his 17 points and glue-like defense on Durant the second half. "He said, 'Make him put it on the ground a little more.'''

"We got to Durant better and made him drive to score," Self said. "We changed the way we guard ball screens a little bit, not that that was anything great, but it seemed to keep Augustin out of the paint."

Augustin scored six of his 19 points in the second half.

The Jayhawks were kept in the game offensively the first half by Mario Chalmers (13 points, 3-of-3 threes), Russell Robinson (eight, 2-of-3 threes) and Wright (eight points, 4-of-7 shooting).

They used a 24-7 run to turn the 16-point deficit into a 59-58 advantage just four minutes into the final half. Chalmers had eight points and Robinson five in the run.

The score was 89-86 when Justin Mason missed a potential game-tying three with 16 seconds left. Texas rebounded and dished to Augustin, whose three from the side was soundly rejected by Wright at :10.

KU's Robinson was fouled and hit the second of two free throws at 5.9, assuring the win.

Augustin did fire up a final three, which was rebounded by Chalmers at the buzzer.

"It was a great block. He would have hit that, I'm sure," said Chalmers, who said he went up for a head fake on the play, leaving Wright as the last and best defense.

"I tried to go straight up," Wright explained. "My body wasn't close to him so I was trying to reach up and block it and control it so we could get the ball."

Asked if it was the biggest rejection of his career, Wright replied with a grin: "It ranks up there. We were concentrating on getting a stop. It's not always about how it looks, just getting a big stop there."

It turned out to be a big game for all of KU's starters. 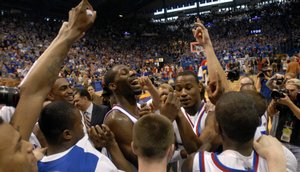 Chalmers finished with a team-leading 21 points, followed by Robinson and Wright with 17 each and Rush 15. Sasha Kaun had nine points, including three of three free throws with five boards.

"When Sasha is your best free-throw shooter, it's a concern," Self cracked. "I don't know what it is. We practice them. We practice them when we are tired. If we make free throws down the stretch, it's not a close game."

Winning the close game may have made the postgame celebration even sweeter. The players watched a highlight video arms wrapped in arms, wide smiles on their faces.

Lew Perkins pranced about with an unlit victory cigar as players and coaches shook the hand of the happy athletic director.

"I thought it was a fabulous crowd," Self said. "It was scripted good for Kansas, where you have to fight, tough game and (televised on) CBS, a lot of people watching. There was high-level ball going on today."

"It was a great stage, a perfect setup," Robinson noted. "You win, you win the outright Big 12 at home in front of all the fans against a team that's hot with a great player. We had to take advantage. No way we could let it slide and share it with two teams."

The Jayhawks proved greedy and took the crown for themselves.

"It's a special day for us. We won it in our own home with the fans going crazy," Rush said.