Willie Pless will join a select Kansas University list this fall when he becomes the 14th football player to have his name added to the school's Ring of Honor.

A linebacker for the Jayhawks from 1982-85, Pless is the KU and Big Eight Conference career tackling leader. He will be feted during the season opener Sept. 1 against Central Michigan.

His 633 career tackles are 117 more than Nick Reid, who is second on the school list with 416 stops.

After earning all-state honors at Anniston, Ala., High, Pless played in every game as a KU freshman in 1982. As a sophomore in 1983 he earned first-team all-Big Eight honors with a then school-record 188 tackles.

That year he averaged 17 tackles per game and recorded at least 20 stops four times. Against Missouri that season he recorded 22 tackles, a sack, interception and fumble recovery.

Pless to join Ring of Honor

KU defensive legend Willie Pless will be added to the Ring of Honor at Memorial Stadium on September 1.

In 1984 Pless earned second-team Associated Press All-America honors after recording 206 tackles. In that season, he registered a school-record 25-tackle game against Oklahoma State and notched double-digit tackle totals in every game, including 20 stops four different times.

As a senior in '85, Pless was tapped first-team All-Big Eight for the third time while registering 191 tackles. He played in three all-star games - Blue-Gray, Senior Bowl and East-West Shrine. He was chosen the defensive MVP of the Blue-Gray contest.

Pless also excelled in the classroom where he was a Region VII Academic All-American in '85. 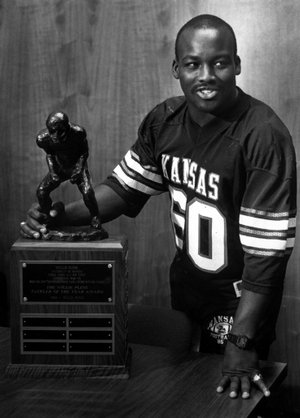 Undrafted by the NFL, primarily because of his undersized 5-foot-10, 210-pound frame, Pless went to Canada, where he made the CFL all-star team 11 times, and was chosen the league's top defensive player five times. He retired from the CFL in 1999 as the league's all-time leading tackler.

Pless, who lives in Edmonton, where he works in sales, is the first former Jayhawk tapped for the Ring of Honor since Nolan Cromwell in 2005.

I remember hearing about Willie growing up in Kansas...a well deserved honor for sure. It's unfortunate that the NFL passed on him because of his size.

Wonder why it took so long to get Nolan Cromwell in the Ring of Honor. He played seven years prior to Pless and he didn't make it until last season. The Ransom Rambler was the most exciting player I've ever seen in a KU jersey (no disrespect to Gale Sayers and John Riggins). With Billy Campfield at fullback and Laverne Smith at tailback KU had the best wishbone offense in the country. Defenses couldn't key on any one player in the backfield because all three were capable of finding the end zone. They were on their way to defeating OU for the second consecutive season before an injury ended his college career. I think the only game they won after that was against the mildcats who were the doormats of the conference at that time. God that was a heartbreaking injury. Probably deprived KU of arguably their best team ever. I think seven players from that squad ended up on NFL rosters. Nolan played about 10 years for the Rams including a couple of pro-bowl seasons. Was widely recognized as the best athlete in the NFL in his prime. He recovered from his injury in time to participate in the track season. Saw him win the 400 meter high hurdles in a landslide at the Kansas Relays.

Nolan Cromwell was a burner in the quarter-mile and IM Hurdles! I think he might have broke 57 seconds in the quarter, which is highly unusual for a FB player.

I remember Willie Pless. I was going to Grad school at Rockhurst, while living in KC. Used to watch the coaches shows on Sunday night during my weekly study time. They had KU, KSU, MU and OU. The KU show was almost a Willie Pless highlight each week. He was the man on D!

l also remember that MU opened the season down at Misssippi. Due to some injuries, the Tigers started 24 white boys that night. The KC Start really chewed them up for this and rightly so. I doubt this has ever happened since!

A true testiment to exactly how retarded the NFL really is to pass on an athete that puts up numbers that Gaudy.

Once a playmaker, always a playmaker. Speed is the overall best measurable statistic in combines to predict future success, but heart and playmaking ability are given far too little credit.

That's why I used to be a fan of the NFL, and now could care less who wins the Superbowl. Now if we could just convince the powers that be to run a playoff in the college ranks, the game would be nearly perfect.