San Antonio — Clearing out the jam-packed notebook as Big 12 media days wrap up. Amazingly, all 12 of the league's coaches are optimistic about the 2007 season. :

¢ Fans don't have an intimate relationship with football players like they might with other athletes. Football players wear helmets and bulky face guards and play on a field far away from where the fans sit. Many fans don't know what a particular player really looks like.

Unless their picture is in the newspaper.

Which brings me to Kansas University quarterback Kerry Meier. The mug shot of Meier that's given to the media and on proud display on page 85 of KU's media guide is awesome: Meier is supporting his traditional shaggy haircut - and has a sweet blonde mustache to go with it.

He looks like my father on his wedding day back in the 1970s. That's cool.

Meier wasn't at the Big 12 media days to explain his flashback look, but even money says it was a dare of some sorts.

Whether Meier sports the 'stache for the rest of the season is to be determined. But in newspapers all over the state, his Jake Plummer look will live on for at least the next year.

¢ One of the best success stories in the Big 12 is Oklahoma State starting cornerback Martel Van Zant, who was born deaf.

You can't help but root for this guy. He showed up with his interpreter, Allie Lee, on Wednesday and happily answered questions about playing the complex game of football without being able to hear. He displayed a great personality and had a smile stuck on his face. He really enjoyed telling his unique story.

Best question: Someone wanted to know Lee's name. The reporter asked the question to Lee, who, following protocol, signed it to Van Zant. Van Zant spelled out Lee's name to Lee, and he then answered it. 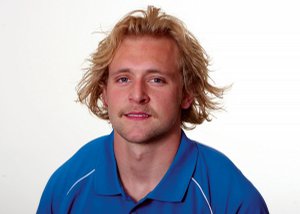 ¢ We had to ask Colorado coach Dan Hawkins about his famous scream-fest he unleashed during the offseason, which quickly spread across media outlets.

If you didn't hear it, it's out there on the Internet and worth your time. Hawkins calmly talked about a letter he received from a parent wondering why the team doesn't get more time off. Hawkins explained that players get three weeks off in the course of the year, before saying, "But here's my point : "

Then, in a ear-destroying rant, he screamed "IT'S DIVISION-ONE FOOTBALL! IT'S THE BIG 12! IT AIN'T INTRAMURALS!"

It was hilarious, and even Hawkins laughs about it.

With boring coach-speak rampant at Big 12 media days, we'll take all the animation we can get.

Must've been some bet. Hope it was worth it!!

Words cannot describe how awesome that picture is. LOVE the 'stache and the Nick Nolte mugshot-esque hairdo. That's fantastic.

I would say it is pure Matthew McConhaugey from Dazed and Confused.

Is this really the do best KU football has to offer? It's only July and the season is over.

I'm sure this is some sort of joke. It would be a lot more funny if he was a good quaterback. Instead he is a below average Big XII QB that looks like a crackhead. I know we will all laugh and talk about how cool because it's a KU guy but if this was a picture of KSU or MU's quarterback we would all go crazy...

Good point. Maybe Mangino should consider giving Meier a military cut until he can perform on the field.

How funny reading this a year and a half later. Kerry is an awesome contributor to the team because of his talent and versatility. He's been great at WR, and in KU's magical 2007 season, it was Kerry's picture that ended up on the cover of Sports Illustrated. I'm fine with the hair and mustache, but roster photos are usually kind of lousy, just a notch above DL, school ID or passport photos.