Guard says he'll return Dec. 1, give or take a month

Nick Krug/Journal-World Photo.Kansas guard Brandon Rush takes questions during a press conference Thursday at Allen Fieldhouse in which Rush updated media members on the status of his injury.

Brandon Rush pushed open a hallway door in the northwest corner of Allen Fieldhouse, and, after glancing to his right, shook his head in utter disbelief.

A whopping seven TV cameramen, as well as a batch of newspaper and radio reporters and print photographers had gathered to visit with Kansas University's junior shooting guard three months before the start of hoops season.

"I didn't expect this. I heard it'd be five or six people. I'm kind of shocked," Rush said.

After all, this wasn't a news conference called to announce any decision to enter the NBA Draft.

It was merely a meeting with media members who'd put in requests to see how Rush was progressing from his June 1 ACL surgery on his right knee.

"It's going well," Rush said of rehab, which includes exercise drills from 9 to 11 a.m., every day, followed by an hour of weights, 45 minutes on the stationary bike, rehab again at 1:30 p.m., with a final rehab session after an afternoon nap.

"We've got a new machine for ACL tears that really focuses on the quad muscles. After surgery I lost a little bit in my quad muscles and hamstring. I'm trying to build that back."

Rush awaits the day his knee is strong enough for him to take the next step in a process that'll have him on the basketball court "by Dec. 1 or a month ahead or behind either way."

"Friday will be the seventh week since I had surgery. At 12 weeks I can start running. " Rush said. "I'm really looking forward to that. I'm not patient at all in rehab. One day I started jumping. My trainer told me to slow it down so I don't hurt myself again."

Rush - he said he's actually lost 10 to 15 pounds of muscle rather than gaining weight during his period of inactivity - has felt more mental than physical anguish since tearing his ACL.

It's because he misses playing the game so much.

"I'm looking at dunking on somebody, getting back my hops," he said.

He did watch the live broadcast of the 2007 NBA Draft - a draft he'd planned on entering before coming down wrong on his right foot after making a layup. 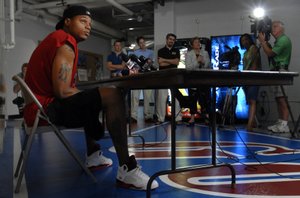 "I watched the whole thing (draft). It was a little bit tough. I had to look at it like, 'That's going to be me next year, I hope,'" Rush said.

"It was a crazy draft. I was pretty surprised at some of the picks.

He wasn't shocked KU's Julian Wright was tapped in the lottery by the New Orleans Hornets.

"Julian is amazing," Rush said. "He did well. He's moved into a house and bought his mom a house in New Orleans. He's living the life right now."

Rush believes that, like Wright, he'd have been selected in Round One.

"I probably would have fell in like the 20 spot, where Daequan Cook was," he said of the Ohio State freshman shooting guard, selected No. 21 by Philadelphia's 76ers.

"My name was in some of that conversation - being on the board with some of those guys. I had to sit there and think, 'I've got to wait another year or two.'"

Acknowledging he'd like to be part of the 2008 NBA Draft, Rush won't discount the possibility of returning to KU for his senior year.

"I can't say anything. I said that last year and ended up back here with a torn ACL. I'm not going to do that again," Rush said.

He admitted it had been tough to get fired up about heading to class his junior season after coming so close to being a wealthy NBA player.

"I had to go back and do all that stuff (enroll). I definitely don't want to go through it again, but I have no choice," Rush said.

His spirits are raised by thoughts of the upcoming season.

"I like Tyrel. He's a great player. I think he'll play a lot of minutes. He's the hardest worker on the team ... other than me, now," Rush said, with a grin.

Yes, Rush still is smiling, despite his current injury situation.

"His attitude is good," KU coach Bill Self said. "He's been very, very, very responsible and hard working with his rehab, to the point where the trainers are very pleased and pleasantly surprised with how much effort he's putting in. There's no poor-pitiful-me attitude at all."

That's in part because of support from coaches, players and family members.

"Coach Self told me to keep my head up, keep a good attitude," said Rush, who has used this time to spend dribbling a basketball with his weaker left hand, whether standing or in a chair. He's been energized by the fact "the pain has not been real bad, not bad at all, ever since the scar tissue was broken up.

"My teammates help me, especially my best friend Mario (Chalmers). He's always been there for me, tells me to keep my head up. Things happen for a reason," Rush continued. "That's what my grandmother always told me. There's a reason I'm back at KU."

hang in there BR. we're behind you 100% and look forward to your return.

I love that you are doing well! I also like that Brandon sees some good things in young Tyrel Reed... that says alot.

A SR year would not be a good thing. That either means he had a subpar JR season or another injury. It looks like we are going to need his scholarship anyway!

I love the honesty about not wanting to go back to school anymore and about how much he is dreading it. No more 100-200 level classes for B-Rush. That might be more of a problem than the ACL tear for his prospects of playing in the 2nd semester.

I think his statement was more a "I was ready to go out and play for pay" than a "I don't think I can do the work."

Its like getting ready to move into a house and then a week before closing the roof caves in. It's not that your old house necessarily sucks. It's just that the new house had you really excited.

I hope Rush can get past the mental part of the injury and has a great year.

Brill- I agree with you that if he stays for his senior year something negative probably happened, but why would we need his scholarship? Also, I too love Rush's honesty. He's always been a straight shooting, tell it like it is kind of guy. He understands there's no sense in dancing around such issues.

After surgery I bet he averages 53 ppg.

I wish my problems consisted of just having to enroll in school, take naps in the afternoon and then have a bevy of paid professionals massage my sore muscles.

I can't wait till the next game BR plays in. It's ganna be a great moment and i'll be there at the feildhouse like everytime! haha

NBA scouts may not pick up on the buzz of Brandon Rush if he only plays half a season this year, and that with an injury. It would be really hard to know where to put him if that became an eventuality, and so I'm sure that's why he'd got people telling him he may have to consider coming back his senior year, so that he can really showcase his talents once again on a healthy leg.

I think by now the scouts know about Rush. Even if it takes him till the post season to get all the way back, if he were to have a great tournament I bet that would be enough . Not that I'm expecting it to take that long.

jayceph,nice comment.Brandon, great attitude! keep up the hard work and you will be 1st team all american!

Im excited for Brandon. He seems to be doing all the prescribed things, and also keeping a fairly good attitude. We all know what he wants, and see the restraint he is trying to show compared to his brothers, in order to achieve what he wants. How often in life can you say your destiny is largely up to you (with a big outcome like Brandon wants)? Although there is no guarantee, he seems to be doing everything humanly possible. Damn this injury, but you will show us and the world, Brandon! We are with you.

sometimes people sustain injuries and theyre never the same afterwards. Lester Earl bring back any memories? Bona fide pro prospect before his knee injury, and then none of the scouts would take a second look at him afterward.

No, the scouts do not know "by now" about Rush. They will do the prudent thing and evaluate his performance in the season as they keep tabs on his recovery.