Odds not in Buffs’ favor

¢ with 22 straight losses against ranked opponents on the road.

¢ with no victories in history on the road against top-10 teams.

¢ with 23 straight losses at Allen Fieldhouse.

"This year is not their best year," KU junior guard Russell Robinson said. "(But) we seem to get everybody's best punch. We expect them to come out and play hard, very loose."

The Buffs have eight freshmen on the roster - who will be playing for a new coach next season.

Patton during the preseason announced he would not seek or accept a contract extension at CU.

"I think as far as looking forward to the future, it would be tough," Robinson said. "You've got to seize the moment and make the most of the opportunity now. If I was in that situation, I'd deal with it now, and when the time comes and he (Patton) has to leave, accept that and move on."

KU coach Bill Self is a friend of Patton, who in 11 years has 182 victories, four NIT appearances, two NCAA Tournament appearances and three 20-win seasons.

"I would say obviously it's not the best of circumstances," Self said of Patton's final season at CU. 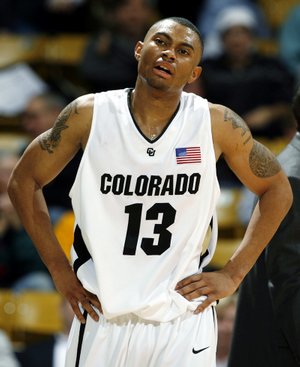 Colorado forward Xavier Silas reacts after turning over the ball in the first half of CU's 79-65 loss to Missouri on Wednesday in Boulder, Colo. Silas has led the Buffs in scoring in three straight games.

"I've not talked to Ricardo in a while, but one thing he has done : they have played hard. They've been in just about every game they've lost. I don't think it is a great situation. (But) one thing it does is remove some of the question marks throughout the season for the players, if in fact the administration was going to go a different way.

"Ricardo was pretty up-front. He's always been that way since I've known him."

Colorado does have a big-time talent in 6-foot-6 junior Richard Roby, who averages 16.7 points and 4.7 rebounds a game. Roby has averaged 14.7 points in league play off 38.1 percent shooting. He has made just seven of 29 threes for 24.1 percent.

"I definitely think they'll come out and play well. Richard Roby will be excited and juiced up, ready to be out there," Robinson said of the 6-6 guard. "We have to go out and control the game, try to take their best player out of it."

Roby declared for the NBA Draft after last season, but did not sign with an agent. He eventually pulled his name out of the draft.

"I wish they would have made the (NCAA) Tournament last year," Robinson said. "They came real close. Had they made the tournament and won a couple of games, I think he would have left. He is still a good player. He will come out with enthusiasm."

Of Roby, KU's Self said: "We have great respect for him. He's played well against us his first two years. We know he'll come in looking to score the ball."

djkc28...as Hawks fans, we should NEVER pre-count our chickens. We all know we have a tendancy to play to the level of our competition. Hopefully, you're right.