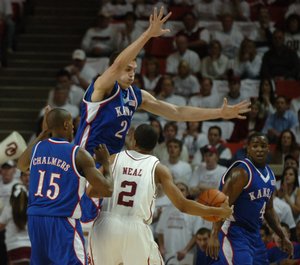 Norman, Okla. — Former Oklahoma University coach Kelvin Sampson not only left the Sooners in favor of Indiana, he left Oklahoma on probation for making excessive phone calls to recruits.

Even so, when Sampson - in town to see his senior son Kellen's final home game at OU - was introduced to the crowd before the game, as were family members of all the seniors, and at halftime to be honored, he received a loud ovation.

The Oklahoma fans chose to remember the good times. Sampson had the highest winning percentage (.721) of any coach in the school's history, taking the Sooners to the NCAA Tournament 10 times in 11 seasons, including one Final Four appearance and one season that ended in the Elite Eight.

Sampson saw his son, a seldom-used walk-on, start the game because of his senior status. He almost was able to see the players he recruited stage an upset over the third-ranked team in the nation. Kansas won, 67-65.

Trailing by 17 points with 1:39 remaining in the first half, the Sooners stormed back to tie it at 51, but never could get the lead.

The halftime speech given by Sampson's successor, Jeff Capel, could have had a little to do with the Sooners getting back in the game.

"We talked about believing. In the first half, I didn't sense that our guys really believed that we could win," Capel said. "That was my whole halftime speech, that if we didn't believe we could win, then we shouldn't even be out there."

Oklahoma senior Nate Carter had an off shooting night, making just four of 15 field-goal attempts, but he finished with a game-high 20 points and nine rebounds.

"We feel like we could have won the game," Carter said. "They made some free throws down the stretch that at first they were missing. They made a lot of their free throws at the end of the game, and they played hard. They are the No. 3 team in the country for a reason. We matched their intensity for the entire second half after starting off slow."

There was a time when Kansas had enough class to cheer for an ex-coach after accepting a job at another school. It makes me sad that we now have to look to Oklahoma for guidance on mature, classy behavior.

Who looks to OU for mature behavior? What? I'm not even sure I understand where you are coming from?

Put on your baby blues Peter and show us how it's done!

you cant compare apples to apples peter, and youre comparing apples to oranges. Being at the game last night, i realized something. Oklahoma is not a basketball school, and probably never will be. Indiana, however, is! I can't blame Kelvin sampson for wanting to go coach at a school where basketball is first, such as a school like kansas, duke, kentucky, arizona....ect...... Kansas and UNC are apples and apples, oklahoma and Indiana are apples and oranges. By the way, there were a few boos, from the people who actually showed up!

Peter-Its interesting to see KU fans try to justify disrespect of a Kansas Legend. I wish KU fans would grow up. I hate to say it but KU fans are less than classy. embarrassing and pathetic.
Roy went to UNC, boo hoo, how dare he!

yes sir, i am embarassing, less than classy, and very pathetic. Having certain feelings about someone does not make us this way. Everyones entitled to their opinion, and thank god for that!

If Roy would have went the first time, it would have been different. He said, "I'm Staying" and that he would end his career as a Jayhawk. Then shortly after the Championship, he again said, that he didn't give a $%^# about North Carolina. If Roy would have just been honest, then it would not have been that big a deal. That whole deal with North Carolina, Roy, Dean, all stunk to high heaven. Just ask Matt Dourghty.

Again... why are we supposed to look to OU for guidance and maturity?? Huh?

Because of Billy Tubbs, remember? You can't spell maturity without Billy. And oh, let's not forget about Barry Switzer. Brian Bosworth, anyone?

Perhaps the sleaze tolerance level is higher in OU land. Besides, Sampson doesn't continue to lie about his motives and whine, whine whine to the media every chance he gets. It's been, what, 10 days since we last had to read about 'ol hurt feelins' roy?