Apple of their eye 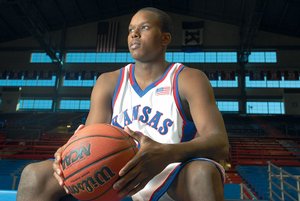 THE PREGAME INTRODUCTION OF KANSAS UNIVERSITY JUNIOR GUARD RUSSELL ROBINSON before home games has become the latest tradition to catch the fancy of KU fans while watching a game inside Allen Fieldhouse.

In what has become a tradition, the long-time Lawrence radio personality with the booming voice bellows the first "New York" during Robinson's entrance, 16,300 fans the second, in one of the most creative displays of audience participation in college sports arenas today.

"I love that they do it. I appreciate it. It definitely gets me ready for every game," said Robinson, a 6-foot-1 junior guard from The Bronx, who has grown fond of the personalized 'intro.'

"I wouldn't call it goosebumps, but I have gotten very excited to the point I feel like crying, maybe. It's one of those 'happy tears' kind of things," he added, noting he's looking forward to hearing it again before today's 8 p.m. tip against Texas A&M and more importantly, his parents experiencing it for the first time prior to the Texas game on March 3.

"There's been heavy emphasis on the 'New York' from the very beginning," Booth said of his impromptu introduction of Robinson, who started 32 games his sophomore year and 22 this season.

"When did the crowd start saying it? I'd say the start of the Big 12 season last year. I decided to lower my voice one game. They roared and I never had to say a second 'New York' again."

Booth said it's fitting the crowd does something special for Robinson, who coach Bill Self has called the "heart and soul" of the KU team.

"The classiest thing I ever heard from a player, and I've heard a lot of classy things, is when Russell Robinson made the comment he wouldn't 'get in it' with another player - he wouldn't argue with somebody (Iowa State's Curtis Stinson) because it would set a bad example for younger players. I thought it was impressive he realizes he has an influence on young people," Booth said.

Just as 16,300 who chant his hometown have an influence on him.

"I think this is the fans' way of showing their appreciation for me, so I don't take it for granted," Robinson said.

Many fans figured he would pack up and return to New York after a stormy freshman season in which, after a quick start, he scored just one point while playing mop-up minutes in KU's final 17 games.

"Hopefully I can hear it a lot more," Robinson said.

"Russell is pretty quiet. He never has said anything about it, but you can tell it gets him pumped up," junior Jeremy Case said. "I think it's just because New York is a hard place to grow up. He relates to it. He's proud to be from there and to make it out of New York, I guess."

The soft-spoken Robinson, who usually leads by example, can't hide his enthusiasm during introductions.

Nor can his teammates.

"It's good that he's the last starter called. It's how it's been. We're used to it. It's how it should be. It would be kind of weird if he wasn't last," sophomore Julian Wright said. "He runs into the circle and gets all fired up. We know we can look to him for a spark. It's really nice.

"He's a big-city guy out here in Lawrence. He's become a good player out here. It's different, but he's made the adjustment and everybody respects that."

He'll be matched against high-scoring point guard Acie Law, a 6-3 senior who averages 16.6 points and 4.9 assists compared to Robinson's 6.7 points and 4.6 assists.

"Acie is a great guard; a senior. He has nothing to lose. It's his last time in the fieldhouse," Robinson said. "I'm pretty sure he'll come out aggressive, his team as well."

If Booth's and the fans' vocal chords hold out ... rest assured Robinson will be ready.

"They have a great team, even better than last year. We have to come out with the right mindset and be ready to go," Robinson declared.

Hats off to Russ for surviving the storm. Self always said you are a worker, and we need that "hardhat" attitude tonight!

I really admire you, Russ Rob! So glad you're here.

I like the fact he is very grateful about his college playing days...When I was a kid I always dreamed about being introduced in AFH by the late Jim Gillespie. Take it all in Russ, because it will be over before you know it.

It was awesome the first time I heard his intro and any time Robinson has a good game we win. Rockem Hawks..

did i miss something here? yeah, it's great and all but how is this chant the one of the most creative audience participations in the nation? i mean, aren't we just shouting with the announcer? i like it, but i don't get why i hear time and time again how amazing it is.

"i mean, aren't we just shouting with the announcer?"

No offense intended, but uh...you must not be from Kansas.

KU and KU fans are so fortunate to have an outstanding student-athelete like Russell Robinson. I can appreciate his expression of emotion when he says he feels those happy tears hearing the crowd acknowledge his hometown. I can just imagine the chills he must get. What a high for him. Thank you for making KU your second home. Best of luck against a great competitor tonight. We know you will give it all you have.

Good for Robinson! Also good for the Rock Chalk -- that was famous in 1917 and has grown ever since. Have to admit that as an old timer, I like a little of the old one, where the tone dropped on "U". Hey, it has to be good, no matter what!

I think we started the New York chant after he stepped up and became known as one of the best deffensive guards in the nation. Just as much as we like to see our team score, we like to see the other team not score. Notice we cheer for offense and defense which at other colleges is just unheard of. We need guys like Russ and his defense has made him a fan favorite.

Yeah, I'd definitely have to say that Robinson is my favorite player. Don't get me wrong, I love the whole team. Everyone has something special about them that I love, but to me Russell has just played his way to my heart. He has the attitude, the class, the work all without the glamour, flashing lights or hype. I guess it's been that way with me for all the "underrated" KU guards in recent memory. From Russell to Aaron to Jaque. Each has been one of my more favorite players on their respective teams.
And skragglydoo, just the overall meaning of the announcement to Robinson makes it that special and that awesome. Not to mention that it's another way for KU fans to show how much they love their boys on the court and to show that they're the best fans in the world to play for. Rock Chalk!!!

By the way, did anyone see the A&M fan in the crowd for Gameday this morning? Who let that idiot in there? I thought it was kind of ironic to see him in there after the piece Kenny Mayne did on the Duke UNC rivalry and those UNC students who posed as Duke fans to get into the student section for the UNC-Duke game last year.

anyone can go to it....but i guess it's suicide if they actually show their colors with all the jayhawks there.

i love this guy.

Everybody in Allen Fieldshouse knew to take Kaun out of the game, EXCEPT SELF! Kaun is another Chenowith and I for one cannot wait until he is gone!

why would i be offended if i werent from KS? is it a 'hey a guy from nyc lives in ks!' thing? okay, after that comment i realize there is no way i will ever understand why you all think it is so awesome.