Cindy Self raises a family in the spotlight, commits time to charitable children's organizations

Cindy Self, right, cheers from the stands as Kansas defeats Eastern Washington during the Dec. 5 game at Allen Fieldhouse. Cindy's husband, Bill Self, is head coach for the KU men's basketball team. Cindy Self talks with the Journal-World about life in Lawrence and her role within the community.

By By Ronda Miller - Special to the Journal-World 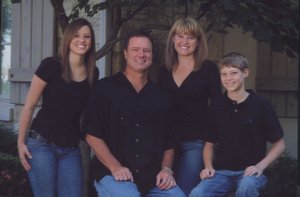 From left are Lauren, Bill, Cindy and Tyler Self. Cindy and Bill met in 1984 in Lawrence, when she was cheering and Bill was playing for the Oklahoma State Cowboys. Oklahoma State lost to Kansas University that night, but the two were later introduced at the Mad Hatter. 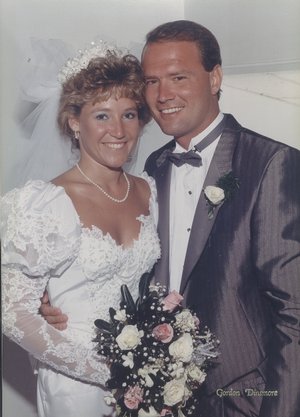 The Assists Foundation was started by the Self family last year with the goal of raising $1 million yearly to help area youths. Kansas basketball coach Bill Self said the vision of the foundation is "to promote wellness with our youth, and in particular with obesity and diabetes." Assists can be found online at www.assistyouth.org.

Bill Self on Cindy

"If there was such a thing as a perfect coach's wife, Cindy would be her. She is unselfish of my time, she is independent but always there to focus on the team and our family.

"Cindy brings a lot of things to the team. First of all, she is a fan. She helps us all out by providing the guys support and adding a motherly touch. She is supportive of my time constraints, the boys' homesickness, and she is sensitive to other aspects of their lives.

"She is a great sounding board for me. She is able to read my body language as well as a team player's body language, which is helpful for something I might be missing.

"One of the most important roles Cindy provides for the boys is that she is a constant in their lives. You can't take the place of someone's mother, but she doesn't change, she is there for all of us."

Cindy Kelly came to Lawrence for the first time as a sophomore to cheer for Oklahoma State University's basketball team when the Cowboys played the Jayhawks in 1984.

OSU lost to Kansas, but Cindy was formally introduced to a Cowboy basketball player who had caught her eye.

His name was Bill Self, and the introduction has since been followed by nearly 20 years of marriage, a 16-year-old daughter, Lauren, and a 14-year-old son, Tyler. Of course, Lawrence is now their home, and Bill Self is the Jayhawks' head basketball coach.

During the KU-Eastern Washington game earlier this month, Cindy Self shared her thoughts on what it's like living in Lawrence and being married to one of the most well-known men in town.

Q: Where were you born and raised?

A: "I was born in Oklahoma City and raised in Yukon, Okla. My father was a comptroller for Oklahoma County, and my mother was a homemaker until my brother and I were older, and then she worked as a secretary. They are both retired now."

Q: Were you athletic in high school?

A: In high school I was a cheerleader and ran track. Those were some of the best experiences in my life, as well as college cheering. I learned to work with and get along with other people, respect my peers and authority.

Q: How have your personal experiences with sports influenced or prepared you for life today?

A: I have always loved sports. I started competing when I was very young with gymnastics, softball and track. I think sports taught me about discipline, commitment and work ethic. I learned that to be successful, it took a lot of hard work.

Q: What was your major in college?

Q: You seem to be involved in a lot of organizations and activities.

A: I volunteer with United Way as the Pacesetter's chairman. I am involved with Big Brothers and Big Sisters as a member of the Gingerbread committee and advisory board. I am the annual campaign chair for the Lawrence Schools Foundation.

Bill and I are also working on getting his Assists Foundation off the ground. We started it last year, and it is to assist kids in the community. I've been involved in many volunteer organizations everywhere we've lived.

My passion is helping children, so naturally most of my volunteer work involves kids. Most of the activities I'm involved in center around my own children's activities. I spend most of my free time at their events. I try to get some exercise by playing in a recreational volleyball league with a group of friends and other coaches' wives. It's a good stress release and a lot of fun.

Q: What are your expectations of fans?

A: They should be dressed appropriately in royal blue and ready to cheer for their team.

Q: What do you think about today's sportsmanship and fans who use profanity?

A: I would rather see fans cheering for their own team members rather than against the other team. I don't like for fans to yell at players, especially if fans yell at our own players. I don't like profanity from fans, or players, because they are role models for the children who watch the games.

Q: How did you meet your husband?

A: After our loss to KU in 1984, the cheer and pep squad went to the Mad Hatter. Bill and I had never been formally introduced, but after we met that night I knew he was someone I wanted to get to know better. He was charming, funny and had a fantastic smile. We went home to Oklahoma City, and Bill called me and asked me to go out on a real date. I remember the first time he called the house, my mom was pretty shocked that it was "Bill Self, the basketball player" on the phone, and so was I, for that matter.

We began dating from that point on, not to say we didn't have our ups and downs. We will have been married for 20 years on Aug. 12, 2008. Who would have thought all of these years later we would end up back in Lawrence?

Q: What is the hardest thing about being married to the head coach of an extremely popular team?

A: The hardest thing about his job is the commitment and people pulling at him from all directions. He is very committed to his job and has a hard time telling people "no." So when we get to see him, we try to make the most of it.

Q: How does your family react after a loss as opposed to a win?

A: After a big win, we usually go home and celebrate with friends and family by watching the game again and rewinding the best parts of the game. Bill is very good about trying not to bring his job home, but sometimes it just can't be helped. I don't think anyone can understand the life of a coach unless they've lived it. Our whole family is in a state of depression after a loss, but some are worse than others. We all talk a lot about every game - the good and the bad - but sometimes we just sit in silence. Sometimes it takes our family a very long time to get over a loss, especially if it comes at the end of the year.

Bill's famous quote around our house is: "In this profession, the highs are never as high as the lows are low," and I have to agree so far. Maybe when we reach that goal of a national championship that quote will change.

Q: If you could change anything about Bill, what would it be?

A: I wish he had more time to spend at home with our family. He also has a small issue with being on time.

Q: You are left alone to raise the children by yourself a great deal of the time. How hard is that?

A: There are times when it is very difficult. It was different when the children were younger than it is now that they are teens. I missed Bill's help then because I would be physically tired, and now it is more about their school and after-school events. And his help with discipline.

Q: When did it really hit both of you just how famous you are in Lawrence and Kansas? How does that make you feel?

A: I think it hit me the first day we arrived in Lawrence. We had reporters and cameramen chasing our car and following us around. It probably bothers me and my children more than it does Bill. It's no big deal to him. The fans at KU are awesome and are pretty respectful of our privacy.

Q: Where do you see yourself in five years?

A: I hope we are putting two children through college and living right here in Lawrence.

A: Twenty years from now I hope we are retired, enjoying grandchildren and watching basketball games for fun, not as if our lives depend on each possession.

- Ronda Miller is a fellow of the Citizen Journalism Academy, which is sponsored by The World Company and Kansas University's William Allen White School of Journalism and Mass Communications.