Michael Lee, who has traveled all over the United States and to several foreign countries since graduating from Kansas University in 2005, has decided to unpack his bags in Lawrence.

Former KU shooting guard Lee - he competed for the Harlem Globetrotters in 2005-06 and played professionally in France and Canada last season - on Wednesday was named graduate student manager by Jayhawks coach Bill Self.

Lee will work in the KU basketball office as he pursues a master's degree in sports management and continues on a path to become a college or high school coach.

"Honestly, I really do feel good to be back," Lee said. "It's funny because when I left I said I never would come back to school, but the longer I was away, I realized Kansas is a part of me. I was in love with Kansas from day one. I'll be part of Kansas until the day I die.

As does Self, who coached Lee for two of his four college campaigns.

"I'm excited to have a player back in the program, not in a playing way, but as an ambassador for Kansas basketball," Self said. "As a player, Mike was an extremely hard worker on the court and in the classroom. His interest in becoming a coach and pursuing a graduate degree has brought him back to KU." 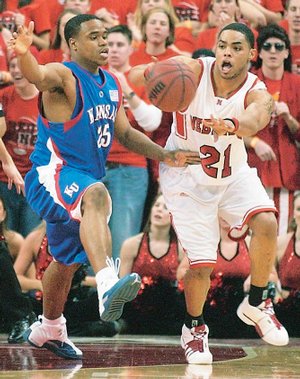 Former Jayhawk Michael Lee is back with the team, agreeing Wednesday to become the squad's graduate student manager.

Lee - who recently learned his injured right shoulder that cut a stint with the Kansas Cagerz short last spring will not need surgery - will be able to work out at practice if the Jayhawks, who have a 17-man roster, ever fall short of bodies.

"I'll do things like check curfew on the players, that type of thing," Lee said. "I'll be in the office all day soaking up information, be in every meeting I can be in. I don't know completely all I'll do yet.

"This will give me a chance to get my foot in the door and see how things really work on the other side of it."

Lee said he's glad he gave pro basketball a try. It's now completely out of his system unlike ex-Jayhawk Aaron Miles, who will play this year in Spain. Miles and Lee are lifelong buddies from Portland.

"At this point in my life I don't want to play anymore, not professionally," Lee said. "I've always wanted to be a coach. I didn't think I'd be doing it this quick, but things happen. Opportunities come and that's why I'm here. Aaron is ready. He's worked so hard. We'll be OK apart. We've been apart before."

Lee is thankful for the past two years full of opportunities.

"The Globetrotters was a lot of fun for me," he said. "I got to travel to a lot of places, meet a lot of people. It's a unique situation. Our job was to make people smile. If we made people laugh we did our job at the end of the day.

"In that regard it wasn't a lot of pressure to perform. The Globetrotters really didn't satisfy my heart as a competitive basketball player because it was entertainment.

"France was a different experience. The hardest thing about France was getting adapted to a whole new way of life, from the language to the food, to stuff they did I wasn't accustomed to."

Lee, who played in two Final Fours, believes his first year on the KU staff could be something special.

"I don't believe in luck," Lee said. "Luck is whoever is the best prepared. I don't think about things like being a good luck charm."

Everybody's back: All of KU's 17 players - 12 scholarship and five walk ons - reported to campus Wednesday for the start of class today.

Individual workouts will begin Monday with all players except Brandon Rush (recovering from ACL surgery) to participate.

"We will limit him the first week to see how he feels," Self said of Arthur. "He'll be back Monday in a limited capacity as he works back into it."

Rush should be able to begin jogging a week from Friday.

"Those kids paying their way to school have busted their butt," Self lauded.

"I just started eating better. Expectations are a lot higher than in high school," said Aldrich, who passed seven hours of classwork during the summer.

17 players on the roster! I don't ever remember a team with 17 players. Does the NCAA have any regulations on how many players you can have on your roster? I know you can only have so many scholarship players, but what about walk ons? Just curious. Oh one other comment. Cole Aldrich I am assuming who is a freshmen is 18 years old. Damn. 18 with a body of 6"11 and weighing 240. What I would do to be 18 again with a frame like that. Cole good luck. Keep up the hard work in the weight room and watch those lbs. If you do what you are capable of doing you should one day be a very wealthy individual playing in the NBA. That of course is 4 years from now. Right Cole. Take care. Out.

Lee is now filling the role that Self performed when he worked under Brown in 1986. I don't know what this means (on a cosmic level) but I like the cyclical parallels. ;)

I also like the parallels with 1988 (our last NC) being 20 years ago from what will hopefully be our next championship in 08. People were saying that 08 would be our year after the loss to 'Cuse in the NC. Last year my mom told me that it didn't matter when we got bounced by UCLA, she said that, "next year (08) is our year to win it all." My mom knows more about the cosmos than basketball, but I had us winning it all last year (and I know more about bball than my mother), and I was wrong. Hopefully the cosmos say that it is our turn again. I was only 5 years old when we won our last NC, I need a clearer memory of a NC. dlshaw74- I know that NBA teams can have 17 on their roster, but I'm not sure about college. I'll bet everybody can go to the games. You are right, Cole is a mountain, if he can run the floor, WATCH OUT!

"I was in love with Kansas from day one. I'll be part of Kansas until the day I die." Nice sentiments Michael. It's good to have you back.

Not sure how many players you can have on a roster but I know it is 12, maybe 13, that can suit up and be eligible for a game. So there will be four to five players per game in street clothes.

I've always loved Mr. Lee. That guy has the heart of a champion.

Yes, in some players who get a fair number of minutes you can get some idea of the "heart"on the court--I agree: Lee had/has big heart, as did Haase, Langford, and as does Darnell Jackson, R.Robinson. Maybe not the biggest stats producers, but guys you just love to root for: Lee's frantic defense+timely 3s, Haase sacrificing his body, Darnell doing alot of dirty work (and that gorilla-robot chest-thump after dunk vs OSU--a KU highlight for the ages), to rocksolidRussell providing the poster "face" of the word 'effort'. Its guys like these who may not get as much press, but with their hard work, actually may get the marquis guys to work hard too, thus helping define the character of the whole team. I personally wish we could have guarded Carmelo with Lee more in the Syracuse game (he was very effective those last few minutes when Langford had foul trouble), but that would have limited Langfords offensive minutes....Oh, well. Glad to have Lee back at KU for every reason.

There are no restrictions on the number of players a team can have on the roster or suited for games, but scholarships are limited to 13. Some schools or conferences place their own limits (the Ivy League, for example, limits rosters to 15).

Kansas routinely has early season blowouts where 14 guys will play, maybe more if they have more.

I would add a thought to ChicagoJHawks comment above about the "blowouts" and we give a fair number of garbage minutes to the walkons. I know it is nice to see the bench guys play, but Im wondering if this hurts our starters in their resiliency (or not?) down the stretch in late game situations when its a 1-pt game or something, and every freethrow counts, and the players are dog-tired... I am thinking of other conferences like the ACC (of course), where MD, GTech, UNC, Duke go at it for 4 qtrs, and usually the games are quite close compared to most BigXII contests, and you wonder how that repetition of execution MAYBE? prepares those ACC kids with live training better than our Boys get. Just an idea. Does that make a difference in March when every game after the sweet16 is tough?

Yeah, I saw every game too--but you make the slide, j1625, from calling out Lee's "heart" yet making the focus of your comments the 2005 team, or at least those not named Moody or Simien. Lee was NOT a starter, as his ball distribution was NOT that of Miles, and his offensive prowess was NOT that of Langford. So you are chastizing a bench player for the shortcomings of that entire season...YES, I saw very lackluster performances and inconsistent play by Langford and Miles that season also. Langford had a medical issue with his knee, yet the decision (docs, coaches, and Keith's) was to try to play through it. To most people THAT defines "heart". Aaron Miles I wont say much about, because althought I really liked his play, I was less than pleased with his senior season--YES, that Iowa loss AT HOME when the Cyclones played total zone defense, was a low point when Miles said to the press afterwards: "I was confused (by the zone)". That is NOT what you want to hear from your senior point guard at an elite program! And this from the player who single-handedly BEAT the UAB 'press' (40min of hell), if you recall. Well, I hope you like our team better now, where there is no lack of effort. Sticking to our 'game' may have been an issue vs. SIU and UCLA, but there has not been a lack of effort in the vast majority of the current teams outings, especially conference play and tourney. No need to mention the ORU or other midmajor losses, as all are aware, especially Self and the players about what a slap in the face that really was.
Quit bagging on Lee--this article was about him, not his team that lost its fire (which it did, I believe).

This lee article has been up for a long time. It's time for a new story.