Anthony Collins generally is regarded as one of the Kansas University football team's top NFL prospects.

Not bad for a guy who played a different position a year ago, on the other side of the ball three years ago and with a different kind of ball altogether just over five years ago.

"A.C. came to us having only played one year of football," said KU offensive-line coach John Reagan. "What people don't realize is that even though he's a junior right now, this is only his fifth year of playing football. He was a basketball player. So the strides that he has made are very good. He's pushed himself and had some hard roads, but he's come through those."

He moved to left tackle in the spring and was named preseason All-Big 12 this summer.

No non-conference road games for the 'Hawks

The good news for KU is that for the second time in three years, the Jayhawks won't play a road game until conference play.

"That's nothing to me. Preseason, that's nothing to me," Collins said. "I'm waiting for after the season when the real polls come out to see what I did, to see what everybody thinks about me, to see how many wins we got, what bowl we going to and all that. I don't actually think it's an accomplishment until I actually make it, where my name is getting said on a Sunday and I'm getting paid for it and everything."

Looking ahead to the league is a recurring theme with Collins.

For instance, told his name would be uttered often during broadcasts this fall, despite the fact Collins plays on the offensive line, Collins cackled. "That's good. My momma needs to eat. My momma needs a new house."

Asked why he agreed to switch from right to left tackle, Collins shrugged. 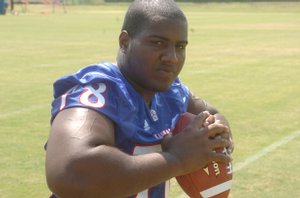 "Coach Reagan keeps telling me it's better," he said. "I don't see no difference. They say in the league they make more money, so I like that better."

It wasn't a painless transition.

It's not uncommon for a team's biggest and best linemen to play left tackle. In theory, it provides more protection for a right-handed quarterback's blind side.

"As long as I'm protecting them, I'm fine," Collins said. "Ain't nobody hitting my quarterback."

The switch took some getting used to, though the degree is debatable.

Which true freshman would you most like to see playing come Sept. 1?

Whether Collins seriously thought about giving up is in question, but there's no doubt he has settled into his new position.

"Spring and summer I had to learn, but by spring it was easy to me," he said. "It's real easy to me now. It's second nature. Once you put two or three months into it, everything's second nature. I was just used to doing the right-side plays - plays that go to the right - to the left side and left-side plays to the right. I was just backwards. But I got used to it and it's all good."

It's not the first time Collins was asked to move for the good of the team.

The first move - from defensive line, the position to which he was recruited and from which he once earned defensive scout-team player of the week during his red-shirt year - was more drastic.

Collins is convinced the Jayhawks' offensive line is all good, too, despite the graduation loss of all three interior linemen. Tackles Collins and Cesar Rodriguez, with whom Collins is swapping spots, are the returning starters.

It's an assessment Collins said holds true of the whole team. No wonder he predicts nothing short of a double-digit win total.

Let's suit him up in November and have Anthony "Big Baby" Collins rumbling down the court of Allen Fieldhouse alongside the rest of the boys. 6-5, 310. I wonder what his vertical is?

I think our o-line will be as athletic and good as it ever has been recently.....and AC is a big part of it. If he has a good year.....the team could have a VERY good year. Go Jayhawks!

It would be nice to see one article where basketball isn't brought up by some fan. I know, I know we all love the basketball team, but its FOOTBALL season! I agree mvjayhawk, they can move and they are pretty big. I think more than the QB's that Jake Sharp will be a big part of how many games we win. Last year he had no patience, I hope he developed some in practice. I have no doubt he does have the talent though.

It's about time!! When a running back was busting records last year ....what did we hear about his O-Line?? We had a Good O-Line last year. It is the position that requires Intelligent Play, Team Play and is beautiful to watch in itself. I would like to see more press on the O-Line play. Maybe A C will bring more public awareness/press to their play, and we could continue to recruit great O-Line candidates, i.e. Joe Vaughn. Great Article...!! Bring um on!!

I agree. It's FOOTBALL season.

I also agree with Collins. A 10 or 11win season is a real possibility. The football will have to bounce in our favor but a 10 win season is certainly in reach. I like the confidence of the players, and I don't want to be asked what kind of dope I'm taking. You pessimists will come around. If our QBs and defensive ends excel, look out!

Sharp and Quigley, the one-two punch in the backfield! I just hope the interior guys can hold their own and clear space for these guys. There is a lot of pressure on both lines (offensive and defensive) to produce to take the heat off of the d-backs and open lanes for our runners. Collins sounds confident, but I'd interested to see what happens in a couple weeks against Cent. Mich. That's when the true story will be told.

I'm ready to bust out this season man.

It is good to hear that you have healed Angus. Looking forward to lots of strong running from you.

I love football but in Kansas it's never NOT basketball season :-)

Speaking of Vanoy ... now ther is a BB player that made an impact on the FB field!

I wish I were really QUIGLEY from KU's team, but I do expect him to have a big year.

overseashawk, I'm in Kansas right now and let me tell you...IT'S NOT BASKETBALL SEASON. Carry on.

When bball is over I don't give it a second thought. (don't shead any tears) From the moment I knew KU wasn't going to beat us in basketball it was "O well, now when does Sept. 1st get here!"

When I started at KU my freshman year, we were #3 in football (Douglass, Riggins, Shanklin, Vanoy, Zook, Hicks etc, etc). KU was a football school. We were good in 2 sports.

This is the year we become a TWO sport school again.

Where will YOU be on game day? (Or was that last year?)

Yeah, that was last year, but that's okay I think it's better than the current slogan--this year it's "this is what Saturdays were made for." My jury's still out on that one...

I love the enthusiasm prairie dog, and there is NO reason why KU can't be a two sport school--Ohio St, Florida, and to some extent Texas have proved it can happen, but I would say that KU finding great success in both would be even more of an accomplishment because we will do it with CONSIDERABLY less $$$ than OSU, UF, and UT have

just like it's ALWAYS football season in Florida & Texas ...

I am SO PUMPED about KU football, I'm ready to roll ...

bmc, we're tailgating and partying before the home opener, right?

/Here's the intro video to REALLY get everyone on this board pumped up:

We are running back deep this year, people need to quit sleeping on B. Mac... Dude probably had seven yards a carry last year.

Absolutely sevenyear! One of my best girlfriends from HS had the audacity to have her wedding on gameday, so a bunch of us guys are planning on ducking out early and heading to memorial--you bet your a$$ I'll be there I may not even change out of my suit!! As it comes nearer we'll coordinate more...