'Loner' Sharp ready to help carry the load for Kansas

Kansas University running back Jake Sharp is one of a handful of players that will be asked to carry the rock and deliver the kind of production the Jayhawks received from Jon Cornish in 2006.

No, not that battle, the one where the leading candidates to be The Man who gets all the touches are trying to catch the coaches' eyes.

No, this is about the other battle in the backfield, the escalating war of words that often arises when a group of guys so confident - and different - in their abilities on the field and so comfortable with their relationships off it tend to, well, pop off.

Told that backfieldmate Jake Sharp described himself as a loner, McAnderson didn't bat an eye.

When word of that verbal scud made its way back to Sharp, he looked like he'd been smacked with a rolled-up newspaper.

"Who said that?" Sharp said, his eyes darting around the room. "B-Mac? B-Mac?"

Given a chance to riposte, Sharp thought for a minute before blurting out, "I can't really make fun of him. But I'll say this: He may look big with all his pads on, but if we were on the street walking by each other, he'd be afraid."

OK, in the smack talk department, Sharp brought a knife to a gunfight.

But in the battle to carry the load for the Jayhawks' running game, Sharp is considerably better armed. 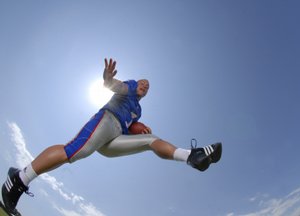 Kansas University running back Jake Sharp is one of a handful of players that will be asked to carry the rock and deliver the kind of production the Jayhawks received from Jon Cornish in 2006.

Sharp played in all 12 games as a true freshman, as a running back and on special teams. He had 21 carries for 129 yards, averaging 6.1 yards per carry serving as caddy for Jon Cornish. Sharp also had six catches for 73 yards.

Cornish, who set the school record for single-season yardage (1,457) is gone, leaving in his wake good depth but relative inexperience.

Maybe it comes as no surprise, then, that KU's coaches aren't yet ready to name Sharp as Cornish's heir apparent, and speak instead about running back by committee.

"Running back by whatever - as long as we're winning," said Sharp, a 5-foot-10, 195-pounder from Salina. "I'd like to be the starter. Everybody would like that. But whoever's out on the field being successful, that's going to be fine for all of us."

Sharp and McAnderson, a 6-foot, 235-pound fullback and elder statesman of the group, are the leading candidates. McAnderson rushed for 31 yards on 122 carries and is a wily veteran.

"Brandon is a definite bruiser," Sharp assessed. "Angus has speed, and he's a bruiser, too. He'll hit you with velocity and power. Donte Bean will stick you. And Carmon Boyd-Anderson's got the tools. He's smooth. So there's a running back for every type of situation."

And then there's Sharp, a quick, cut-on-a-dime type.

Though KU's coaches might prefer to have one back who has all those traits, they're happy to pick and choose, especially in the early going.

"You have to do whatever works with the personnel you have," said run-game coordinator John Reagan. "We have guys who can do certain things really, really well. But I think all those guys are versatile enough when it comes to game-planning you don't have to worry about people saying, 'This back's in, so they're going to do this.'"

One question that has dogged Sharp in particular concerns his durability.

Because of his relatively small stature, critics have wondered aloud if he can stand up to the grind of a full season.

It's a question Reagan doesn't even entertain.

"Where does that come from? It comes from you guys, the media," he said. "I have no concerns about Jake's size or his durability."

If high school is any indication, it won't be an issue.

To put himself among the successes, Sharp worked hard in the offseason in the weight room, putting 15 pounds of lean muscle on his frame. He claims to have lost none of his quickness and, in fact, insists he's faster than before.

"It obviously helps me when I run into a 250-pound linebacker," Sharp said. "My head feels a lot better after the collision than when I weighed 180."

B-Mac's stat line is correct. That averages out to 3.9 yards per carry, which isn't bad considering a lot of those carries were in short-yardage situations. He also had 5 TD's, which tied him for second on the team.

Is that really uncommon for a fullback...they usually get the call on short yardage situations where the offense needs to just pound the ball.

maybe we do have a lot of talent at rb but hows the o-line gonna do in front of them?

I was wondering the same thing, kyle. After all, Jake and Co. aren't very fast if they are staring up at blue skies.

Hopefully we can open some creases for them to rack up big yards.

B-Mac has added a lot of speed and moves. I was surprised at how quick and shifty he was in the spring game. He will play.

Jake S. with 15 more pounds? It speaks for itself.

Donte Bean was also quite impressive in the spring game.

We will be fine, and maybe then some, at RB.

We need another big year from the running attack. Hope Jake and the crew can make it happen. The front line has to pave the way!

It seems liks I can remember him running for more yards last year. Is that maybe a type, 31 carries for 122 yards? Although I do remember him getting hit in the backfield a lot.

Where is Tony Sands listed on the depth chart?

This is going to be like having clark green agian. when clark was in he pounded them then cornish came in and ran past them. thats gong to be what happens with Bmac and Sharp.

Didnt B-mac have a huge gain on a fake punt aginst OSU last year? wouldnt that count on his russing totals?

What the hell are you talking about, jhwekfan1625??? What's wrong with the article?

Cmill-Thats Texas A&M. It lead to our only touchdown in the game.

It was a forward pass from Tucker. So it counts as a pass reception.

I realize that B-Mac line was a typo...I was only joking

i don't care what people post, as long as people are posting on the football articles. It's nice to see more excitment around the team this year.

it is VERY exciting to see other Jayhawks getting interested in the football program!!!

ksufan it was a good article....just cause it didn't talk about basketball doesn't mean it wasn't good.

Agree whole heartedly truefan. It is such a relief to see so much football discussion on this site. Let's carry this enthusiasm into the season and bring everyone to Memorial Stadium (the house that God built). Seriously folks...talk, talk, talk, talk, talk football.