Glaring doesn't begin to describe how Mario Chalmers' performance against Cal last season sticks out from the other 32 games in which he played for Kansas University's men's basketball team.

That showing stood in such stark contrast if not to Chalmers' previous outings then certainly to his perceived potential, that it drove then-senior Jeff Hawkins to seek Chalmers out.

Hawkins invited Chalmers to dinner, and between mouthfuls Hawkins exercised his upperclassman's option to dispense advice.

"I listened to him," Chalmers said, "and I started listening to coach."

The bottom line was this: Chalmers, all-everything out of high school, wasn't in high school anymore. But he was playing like he was.

"I was trying to do too much on my own, not letting the game come to me," he said. "You know, you're so confident coming out of high school. The McDonald's All-America game, all-star games : we thought we knew it all. I started listening to coach - how to run a team, how to play defense, how to run the offense.

"I just needed to listen to coach. Coach knows best."

Now that he's a wily veteran, Chalmers is making sure the newbies know his history so they're not doomed to repeat it.

"Hawk talking to me really helped me out," he said. "So I make sure I talk to the freshmen to help them out, tell them what I went through." 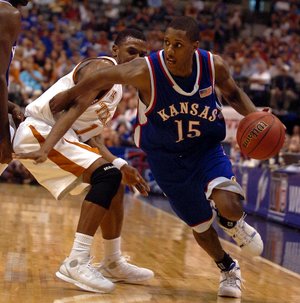 Chalmers peaked at the end of the season.

Chalmers scored in double figures in just two of KU's first 11 games, including that clunker against California.

As a result, Chalmers:

¢ was named Most Outstanding Player of the Big 12 tournament, where he averaged 16 points, 4.3 rebounds and 5.3 assists in Kansas' run to the championship

"My teammates were looking for me," Chalmers said. "My shot was falling. Hopefully, I can continue that."

Difference is, KU doesn't absolutely need him to.

While the contributions of Chalmers and classmates Brandon Rush and Julian Wright were crucial to last year's fortunes, the Jayhawks won't rely so heavily on the latest ballyhooed first-timers.

"Last year was a growing-up year for us," Chalmers said. "Now we're more prepared, and we're more mature. One difference is, those guys (freshmen Sherron Collins and Darrell Arthur) are more in shape than we were. They're more eager to learn than we were. I think they'll have a great impact."

In fact, Chalmers said, the Jayhawks might be their own worst enemies.

"We just have to stay focused," he said. "If we stay focused, I think we stand a great chance to win the whole thing this year. But we have to stay level-headed. Our biggest key is not to take anybody lightly."