Oden laid back at All-American game

No longer trying to impress scouts, player of the year takes it easy

San Diego — No player came into this week's McDonald's High School All-American festivities with as much of a reputation as Greg Oden.

Parade Magazine named the 7-foot-1 center from Indianapolis as its player of the year following his junior season, and during Tuesday night's awards banquet, he was presented the 2006 Morgan Wootten Award as the McDonald's All-American Player of the Year.

In years past, that pedigree would have led to an inevitable question: Would Oden honor his commitment to attend Ohio State University in the fall, or instead join the distinguished list of McDonald's alumni who bypassed college and jumped straight into the NBA Draft.

However, following the NBA's re-evaluation of its eligibility requirements last year, including a new rule that says players must be at least one year removed from high school before declaring for the draft, there's no such dilemma this year.

"I already had that decision. I don't really worry about all that stuff. ... I know that I wanted to go to college," Oden said. "They made the decision that I don't have that choice, but I was already headed that way. It's fine with me."

"I'm not sure how it was the years before, but I know now guys just can come out and play," added Oden about this week's environment. "A lot of these guys except for maybe one or two have already made their college decisions, so they can just come out here and have fun and just play and not have to worry about impressing the scouts."

The people responsible for putting on the McDonald's contest are also putting a positive spin on how the change will help the yearly all-star competition. With the NBA factor now out of the way, the belief is the game will grow in popularity. 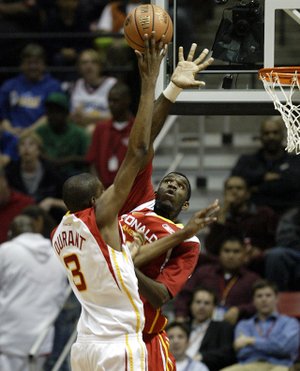 Greg Oden, back, gets up trying to block Kevin Durant's shot. Oden, of Lawrence North High School in Indianapolis, played for the East squad in the McDonald's All-American game Wednesday in San Diego. He has committed to play at Ohio State next season.

"A lot of the viewership will probably go up now, even more so, for our game because a lot of the alumni at universities are now watching the kids that will end up going to their schools," said Michon Ellis, in his sixth year as the director of the game.

The one noticeable difference has been in the number of NBA personnel on hand in San Diego this week to take in the four days of practices and scrimmages leading up to Wednesday night's game. This year, there's no rush to find the next LeBron James or Kevin Garnett - two of the six game MVPs who jumped straight to the pros in the last 12 years.

"We still have a number of scouts that are still coming out and checking out the game, which we're happy to have them," Ellis said. "But there's some that are taking a step back and letting the kids play for one or two years in college or whatever they're going to play and going from there."

¢ Famous footsteps: Two players added their own chapters to their families' athletic legacies with their participation in Wednesday's games. West forward Abi Olajuwon (Sherman Oaks, Calif.) is the daughter of former Houston Rockets great Hakeem Olajuwon and is slated to play at Oklahoma next fall. East guard Mike Conley (Indianapolis) is the son of Mike Conley Sr., who won the Olympic gold medal in the triple jump at the 1992 Summer Games in Barcelona, Spain.

¢ In good company: Three sets of high school teammates suited up in this year's boys game. East players Mike Conley and Oden both hail from Lawrence North High and will join forces next fall at Ohio State. West team 7-footers Brook and Robin Lopez played at San Joaquin Memorial High in Fresno, Calif., and are moving on to Stanford. And East guards Wayne Ellington and Gerald Henderson Jr. played alongside each other at The Episcopal Academy in Merion, Penn. However, they will become fierce rivals in college, with Ellington off to North Carolina and Henderson heading to Duke.