Unfortunately for Kansas University's women's basketball team, Mosley's recollection was quite a bit slower - 30 games to be exact - when it came to showcasing the talent that made her last year's junior college/community college player of the year.

"I think it was a lot of mental things with me," said Mosley, who saved her best game of the season for KU's last, when the 5-foot-6 junior guard scored a career-high 11 in KU's 78-76 loss to Ole Miss on Sunday in a first-round WNIT game in Allen Fieldhouse.

"I was thinking too much all season. When Bonnie (Henrickson, KU's coach) recruited me, I was just playing basketball, not thinking," continued Mosley, whose previous high output was 10 in Kansas' season-opener against Binghamton. "This year, I was thinking all the time. I mean, basketball is a thinking game. But I was thinking instead of playing." 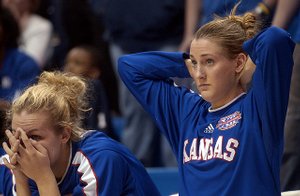 The Lancaster, Calif., native especially was sharp in the first half when she helped pull KU out of a seven-point deficit with eight points in nine minutes. She connected on all three of her shots while grabbing two rebounds and handing out two assists.

"Today I just told myself I was going to forget about all the thinking and just go out and play," said Mosley, who finished 4-of-5 from the field with five assists and three steals.

Mosley said she was disappointed she didn't do enough to extend the season for KU's three seniors - Kaylee Brown, Erica Hallman, and Crystal Kemp.

But Henrickson praised Mosley, Marija Zinic and her other younger Jayhawks' improved play during the past few weeks.

"Shaq and Marija were our two best players in that K-State game," Henrickson said of KU's lopsided loss to the Wildcats in the Big 12 Conference tourney last week in Dallas. "They were two of the better players on the floor tonight.

"That at least gives us some awfully positive things to work on this spring."

Now, about Mosley's recall of Price :

"Yeah, I didn't even remember that was her, because we all called her by her last name," said Mosley of Price, who the Jayhawks won't soon forget since she scored 31 - one off her career high.