Greensboro, N.C. — P.J. Couisnard stepped back from the defender and launched a straightaway three-pointer with the shot clock winding down. As soon as the ball swished through the net, Couisnard pointed triumphantly to Wichita State's rowdy fans.

The message was clear.

The team from that pesky mid-major conference was on its way to the NCAA Tournament's round of 16 for the first time in 25 years.

Karon Bradley hit a go-ahead jumper with about two minutes left, and Couisnard followed with that big three to help Wichita State beat second-seeded Tennessee, 80-73, Saturday in the Washington Regional, giving the Missouri Valley Conference's regular-season champion a second straight victory over an opponent from a power conference.

Now the seventh-seeded Shockers (26-8) are experiencing all the March magic they could only imagine while languishing through an 18-year NCAA drought.

"This is one of those moments I'm never going to forget," said Paul Miller, who had 10 points and eight rebounds. "It's just something that you never understand until you're actually there. You see it on TV, and you see teams going to the Sweet 16 and winning big games in the NCAA Tournament, and to be a part of it means a lot.

"It's just been an amazing weekend. This is my all-time favorite moment, right here." 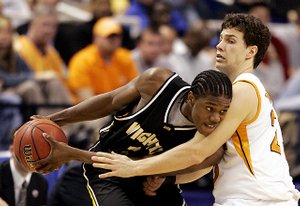 Wichita State opened the tournament with an 86-66 victory over Seton Hall, silencing those who wondered why the MVC got four tournament bids. But beating the Volunteers (22-8), the Southeastern Conference's East division champion, means so much more.

Couisnard finished with 20 points on 6-for-7 shooting for Wichita State, which used a late 7-0 spurt to break a 65-all tie and advance to face the winner of today's George Mason-North Carolina game.

When the horn finally sounded, coach Mark Turgeon pumped his right fist in the air while fans began chanting "MVC!" and "Sweet 16!"

"I kept saying we weren't any good when practice started, and now we're part of the Sweet 16," Turgeon said. "We just keep getting a little bit better."

Kyle Wilson added 17 points to help make up for some struggles by Miller and Sean Ogirri, the Shockers' first-round leaders. Miller, the MVC's player of the year, shot 1-for-9 after scoring 15 against the Pirates. Ogirri scored 12 and didn't get his first basket until late in the first half after finishing with 23 against Seton Hall.

San Diego - Brandon Roy helped bring Washington back from an 11-point deficit in the second half, and the Huskies made the regional semifinals for the second straight year.

Dee Brown and the fourth-seeded Fighting Illini (26-7) go home, coming up short of reaching the regionals for the third straight year. Illinois reached the national-championship game last year before losing to North Carolina.

Washington freshman Justin Dentmon scored nine of his 13 points in the late surge.