Keegan: Still a lot to smile about

AUBURN HILLS, MICH. — No basketball fans suffered more in the month of March the past two seasons than backers of Kansas University.

Not Syracuse fans who watched their team make atypical first-round exits two years in a row, and not Illinois fans, whose team made it all the way to 2005 title game only to lose to North Carolina and was bounced in Saturday's second round by Washington.

Losing as a No. 3 seed to Bucknell in '05 and as a No. 4 seed late Friday night to Bradley after a streak of 21 consecutive first-round victories, KU hasn't won a tournament game since blasting Alabama-Birmingham in '04 to advance to the Elite Eight, where an overtime loss to Georgia Tech prevented the Jayhawks from making the Final Four.

Focusing on the three-game tourney losing streak is no way to shake the blues. The only way out is to look forward, not backward.

The chances of a third consecutive one-and-done meltdown, next time to a Butler or a Ball State, are as slim as the Booth Family Hall of Athletics one day featuring a bronze bust of Micah Downs.

While no basketball fan has had it tougher in March of late than a KU fan, few have as much reason to look forward to the next couple of seasons.

Brandon Rush was responsible for the first good news in the wake of the Bucknell bust and ensuing Moon Bar stabbing of J.R. Giddens. 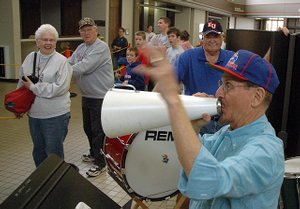 And Rush again was responsible for the first ray of good news in the aftermath of the loss to Bradley, the latest Killer B to ruin KU's March. Sitting in front of his locker, Rush said he would be back for his sophomore season because he didn't "want to go out this way."

Things are looking good on the Darrell Arthur front. Arthur, a 6-foot-9 burner from Dallas more offensively skilled than KU's current big men, could help salve the wounds as early as this week with a commitment to KU.

With Arthur on board to join Julian Wright, Sasha Kaun, C.J. Giles and Darnell Jackson, KU would go five-deep up front, three of them upperclassmen, the other two extraordinary athletes.

On the perimeter, four players would get most of the 120 minutes. Incoming freshman Sherron Collins of Chicago Crane is the No. 2-rated point guard in the nation. With Russell Robinson and Mario Chalmers equipped to play the point and wing, and Rush determined to tighten his ballhandling, KU will have perimeter depth and flexibility few teams can match. Brady Morningstar, tearing it up in prep-school ball, will battle for minutes as well.

It all adds up to a top-10 preseason ranking. Depending on what players book to the pros from other programs, top five is a strong possibility, and a preseason No. 1 isn't completely out of the question.

With so much depth and quickness, KU coach Bill Self might want to consider using a 3-1-1 or 2-2-1 full-court press, however sparingly, as a way to wake up his team when sluggish and terrify opponents into fumbling away leads. Plenty of time to worry about that.

More immediate concerns rule the day on the KU sports scene. Spring football is under way and concludes with the April 14 spring football game. Basketball season is over, yet Kerry Meier hype season has just begun.

We are choked no matter what you say Keegan . I wish I could fire Self right after the lost but I am willing to forgive him on this one . Next year would be different story . If we lost to better teams then I have no problem but losing to Bucknell and Bradley is unacceptable. Bill Self got outcoached. I wonder if we got booted first round next year again then what would you say about Self. Two consecutive year to lesser talent teams and that is not coaching problem to you .

most of your article was right on but,i think self could have used the press more this year. he had case,stewart,vinson.....on the bench. used then more instead of just letting them just wacth the game. i feel they could be used along with our starting guards to pressure all over the court from start to finish.

You guys are knuckleheads and second-guessers. It's one game and anything can happen to top teams every year. This is the same coach that "outcoached" Rick Barnes a week ago. He didn't get stupid in a week. Tournament success will come. Look at all the near-misses by Roy at KU. It takes a lot of luck AND skill to win the big tournament. Chill out and enjoy these kids. Worry about Iraq or something important!

you can say we got out-coached and that may be true, but the guys got out played on the court also. we had so many early turovers and the guys just looked out of synch. keegan may be right-there are things to smile about-but its just gonna take me a while after friday night.

Every coach has their kryptonite; Self's is defenses that change looks. Also, the O'Bryant-Sommerville combination is the prototype for a trap-buster. Every time Kaun trapped on the perimeter, O'Bryant flashed to the basket. This forced Julian to cover and leave Sommerville open for the 3-point dagger.

We've got our homework for the summer; but I'm sure we'll come back ready to conquer! And hats off to the seniors!

I didn't like Bill Self when he was coaching his group of thugs at Illinois and I don't like him now. He was the wrong guy for KU. Defense is nice, but offense wins games. NC is doing pretty well with freshmen, they lost their top seven players and they can score points. Their defense isn't too bad either. Offense wins games. KU's offense under Self has been mediocre at best. The players he ran off (except Bahe) were face-the-basket scorers, now it may be that none of them ever does much, but the fact they didn't like tackling guys on the other team, didn't endear them to Self, so they are gone. Mostly the failure this year and last was more a failure of system than a failure of players. Change the coach, change the system.

haha.. who is this guy wfzman and what is he talkin about??

Hahaha. Aren't we just a bunch of arrogant-know-it-all you know whats? Tell a Division I basketball coach how to coach his own group of guys that he knows through and through. Go ahead. You'll never know more. Also, you all aren't the ones who hire and fire, thank goodness. The people that do know what they are doing, you don't. They also aren't stupid enough to see a highly sad beginning of a season followed by and incredible turnaround and more than successful conference season and tournament followed by a once questionable tourney birth (at an unlikely 4 seed) and a bad squeeker first round loss as a failure. None of the people who know what they are talking about are calling for Bill Self's head. I guess people like you are around in every sport at every unfortunate letdown and bump in the road. Michael Jordan won many games on last second shots . . . but how many games did he lose on last second shots? More than he made. People remember the made ones. People will remember Bill Self and KU's successes here in the next few years. It'll be a far away memory what happened in one bad game at the end of great seasons.

What does he mean the players he ran off? Oh, Giddens the criminal, Downs! He knew that with all the other talent on the team he wouldn't get much PT so he bolted. Padget, everybody hated him besides he hasn't been healthy since. Give me break!!

Well some of you said Bradley isn't a good team and maybe your right but they did just beat pitt also. So they can't be to bad of a team. KU got out played the whole game. They weren't ready for the tenasity of Bradley. We can't hang our heads because of this game. We will just build off this next year and Keegan is right: we will be damn near unstopable next year with our returning talent and the freshmen we're getting next year.

So for all you who still worship Roy and talk about how much better he's done with his team this year . . . look at what just happened. He just lost to an 11 seed. No first round jitters can be used as his excuse . . . They went one more round, but yank yank, he did no better. I want to move on from Roy as much as anybody else. I didn't want to compare Roy and Bill, but I've got to now. Congrats on a great tournament to Roy Williams . . . the man so many of you still adore. People have tough luck . . . KU does and so does the invincible Tar Heels.

I may be the only one, but Bradley winning today made me feel a little bit better. One thing to get knocked out first round, but i hate it when the team that beats you flames out in the next game.

The coaches coach, the players play. Our freshmen and sophomores were in over their heads on Friday and looked it. The same staff that got them ready for Texas in Dallas got them ready for Bradley. The players didn't come through, but experience and another season will take care of that. Sit back, relax, enjoy them while we have them. UNC lost, doesn't everyone feel just a little bit better?

wfz, you truly have to be one of the most immature, incompetent people to walk the face of the earth. i've heard of stupid people and glass half-empty people, but when you combine the two, that's when you truly have a prototypical loser. go hawks!

I predict a Duke-like series of FinalFour appearances by the Self-led Jayhawks. Self is still establishing a base of players he recruited. Year before last was still Roy Boyz who couldn't adapt to the new style. This year was Self boys, but still young. From now on, it is good times and March success.