San Diego — UCLA clanked free throws down the stretch, got outrebounded, missed more than half its shots from three-point range and still won.

No one was more surprised than coach Ben Howland.

"All the stats went against us," he said. "To have everything go against us and still win, it's a testament to the kids."

Jordan Farmar scored 18, including five three-pointers, Arron Afflalo had 13 points and Ryan Hollins 12 in a 62-59 victory over Alabama on Saturday that sent the Bruins to their first NCAA Tournament regional since 2002. 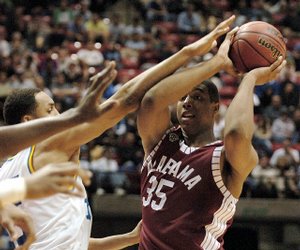 No. 2 seed UCLA (29-6) will play third-seeded Gonzaga (29-3) in Oakland, trying to get back to the Final Four for the first time since its 1995 national championship.

The Bruins hung on for their ninth consecutive victory despite missing seven of nine free throws down the stretch. They were outrebounded 30-21, and 25 of their 47 shots were from three-point range.

Salt Lake City - There's a lot more to Gonzaga than Adam Morrison and his wispy mustache. Good thing for the Zags, because they needed the whole package to get past Indiana.

The Zags proved they're much more than a one-man show in the second round of the tournament, defeating the Hoosiers and making IU coach Mike Davis' resignation official despite getting only 14 points from their scraggly haired superstar.