The Eagles dominated 12th-seeded Montana, 69-56, Saturday in the Minneapolis Regional, looking nothing like the team that struggled to beat Pacific in the first round.

Craig Smith had 22 points and 16 rebounds, pulling down eight on offense and putting most of them back for easy layups, and Dudley scored 20 for the Eagles, who showed they are poised to make a big run through the tournament.

After six straight NCAA exits within the first two rounds, the fourth-seeded Eagles (28-7) are in the round of 16 for the first time since 1994.

"You've got to have killer instinct. For the first time all year, we did that," Dudley said. "You can't trade baskets, especially at this time because that's when you get beat."

Boston College, which needed two overtimes to get past Pacific, didn't trade much of anything with Montana.

The Grizzlies (24-7) were coming off their first NCAA Tournament victory since 1975, but were outshot and outrebounded, 44-29.

The Eagles await the winner of today's Villanova-Arizona game. 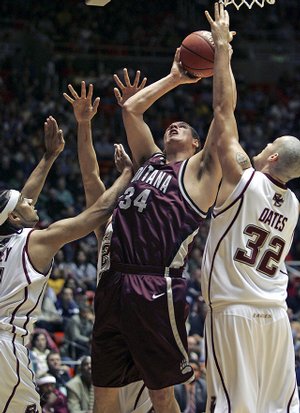 Montana clearly was the fan favorite, but hopes of an upset unraveled as Smith went on an 8-0 run by himself at the end of the first half, then the Eagles put away the Grizzlies early in the second.

Several Boston College starters remained in at the end despite the lopsided score and were booed as they left the court.

Tyrese Rice threw his sweatbands into the crowd, and a fan threw it right back like a visitor's home run at Wrigley Field.

That only widened Rice's smile.

"I thought it was funny because it wasn't the first time that's happened to me. We're moving on, and they're going home, and that's all that matters," said Rice, who scored 14 points. "Everywhere we go the crowd is always against us because everybody wants to see the upset."

Montana's Kevin Criswell had three points, 13 below his average.

BC held Andrew Strait to 11 points - five below his average.

"We were sniffing around, at least at halftime, and got a taste of what some big-time basketball is all about," Montana coach Larry Krystkowiak said.

Florida advanced to the semifinals of the Minneapolis Regional, the first time the team has escaped the opening weekend of the tourney since 2000.

The last time the Gators (29-6) advanced to the round of 16, they went to the championship game before losing to Michigan State.

Adrian Tigert carried the Panthers (22-9) most of the way.

Florida next will play the winner of today's game between Georgetown and Ohio State.