Kansas gets extra day to prepare

Jayhawks will play host Sunday to Mississippi in WNIT

Bonnie Henrickson heard the news late Thursday afternoon: Mississippi could not make it to Lawrence on Saturday.

Henrickson has no gripe because the Jayhawks will have an extra day to prepare for Ole Miss, which received a bye in the WNIT preliminary round.

With so many teams playing in the NCAA Tournament on Saturday, the Rebels were unable to obtain a charter flight today.

So instead of meeting Ole Miss at 2 p.m. Saturday as originally planned, the Jayhawks will tangle with the Rebels at 6 p.m. Sunday in Allen Fieldhouse.

"It's good for us," Henrickson said, noting that Ole Miss has a "drastically different style" than Northern Iowa. Ole Miss is much more athletic, she said. 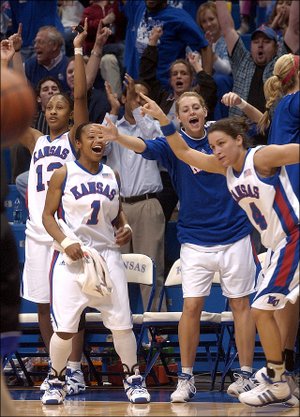 "It gives at least another day to try to prepare for that," the KU coach added. "We've got to be able to handle some pressure on the perimeter and full court."

In particular, Henrickson will try to come up with a plan to slow the Rebels' Armintie Price.

"I think Armintie is the only kid 5-9 in the country that averages a double-double," said Henrickson of the junior guard, who averages 16.9 points per game and 9.9 rebounds.

Notes: UNI athletic director Rick Hartzell, who has worked in Allen Fieldhouse as an NCAA men's basketball official, was on hand Thursday night. Hartzell won't be blowing whistles in the NCAA Tournament. He recused himself because UNI's men's team is in the 65-team field. : Crystal Kemp's 21 field-goal attempts were a career-high. : UNI's 31.5 field-goal percentage was a season-low for a KU foe. : KU's five turnovers were a season-low.