KU avenges loss to UT; earns a No. 4 NCAA seed

Dallas — Kansas University's players got the payback they wanted against Texas Sunday afternoon when KU won its first Big 12 Tournament title since 1999 with a 80-66 victory over the Longhorns at American Airlines Center. The win might have also paid off in a higher-seed in next week's NCAA Tournament, as Kansas (25-7) earned a fourth seed and will play No. 13 Bradley (20-10) in an NCAA opening-round game on Friday in Auburn Hills, Mi. 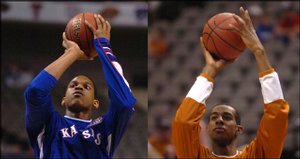 "I know enough about Bradley. Being at Illinois, I know they love their basketball," said KU coach Bill Self, whose squad would play the winner of No. 5 Pittsburgh and No. 12 Kent State on Sunday if it defets the Braves.

Mario Chalmers led five Jayhawks who scored in double figures with 15 points on afternoon where Kansas hit 12-of-24 three-pointers and held Texas without a field goal for over nine minutes in the second half.

"We played timid," Self said about the Jayhawks 25-point loss to the Longhorns two weeks ago in Austin, Texas. "We played with a lot of confidence (today). We hadn't been in that atmosphere before (playing at UT). We needed that to win this game."

Chalmers and Wright were voted to the Big 12 All-Tournament team, as were Texas' LaMarcus Aldridge and P.J. Tucker.

"Credit to Kansas. We made a lot of mistakes and that was the difference," UT coach Rick Barnes, who dropped to 27-6.

KU held a 32-7 advantage on points off turnovers and at one point in the first half had 13 assists on 14 baskets.

"This should give us a lot of confidence," Self said. "Last year we came in on a down swing, but we're definitely going in on an upswing this year. The atmosphere and everything will be comparable to the NCAA Tournament."

Editor's note: Due to difficulties caused by today's storm in Lawrence, game coverage will not be as complete as usual.

Kansas' Mario Chalmers opened the second half with two three-pointers to give the lead back to the Jayhawks.

KU's Julian Wright, who had a soaring tip-in moments earlier, hit a short jumper to give KU a 47-43 lead.

UT's Kenton Paulino hit a three-pointer to put the Longhorns back in front 49-47. P.J. Tucker followed that with a lay-up.

Jeff Hawkins came back and hit a three of his own to cut KU's deficit to one.

Russell Robinson fired in a triple to put the Jayhawks back in front 53-51.

Brad Buckman tied the back-and-forth contest with a baseline jumper with 12 and a half minutes left in the game.

Texas' LaMarcus Aldridge picked up his fourth foul with 11:43 left in the contest.

Buckman tied the game with a lay-in.

Hawkins repsonded with a three to put the Jayhawks up 58-57. The basket equaled the ninth lead change of the game. The contest has also been tied six times.

Tucker hit a pair of free throws to put UT up, but Rush hit two charities to put Kansas back in front with just over seven minutes left.

Hawkins drilled his fourth three of the game to put Kansas up.

Abrams tied the contest with charities.

Wright added a soaring dunk for the four-point lead.

Buckman missed a pair of free throws and UT hasn't hit a field goal in seven and a half minutes.

Gibson had a three rattle-in-then-out, and Rush hit a jumper to put KU up nine.

Buckman finally broke a 9:15 scoring drought with a dunk.

Kansas is going to be Big 12 Tourney champs and Wright put the icing on the cake when he added a highlight-reel, 360-degree dunk in the final minute to seal the 80-68 victory.

Texas P.J. Tucker started Sunday where he left off Saturday, scoring a turnaround jumper on the game's first possession.

The Jayhawks couldn't take advantage of getting the ball deep in the post as KU missed a flurry of short shots and tips on their first possession.

After a missed three-pointer by Texas, Brandon Rush tied his total from the previous game against Texas when he hit a three-pointer from the left corner.

KU's leading scorer came back down and hit another triple to put KU ahead 6-2.

Sasha Kaun scored on a thunderous jam, but Daniel Gibson cut KU's lead to 8-7 on a three-pointer.

Kaun came back down on the next KU trip and threw down a one-hand jam.

Julian Wright scored on a drive to the hoop to put KU up 12-7.

LaMarcus Aldridge scored for the Longhorns then blocked a shot by Kaun as KU leads 12-9 into the first media timeout with 14:49 to go in the first half.

Jeff Hawkins hit a three from the left side to tie the game at 21-all, but A.J. Abrams and Kenton Paulino answered with back-to-back three-pointer for Texas to put the Longhorns up 27-23 with a timeout with 7:21 to go in the half.

Darnell Jackson made the contest a one-point ball game again on a traditional three-point. His free throw cut the score to 27-26.

Brad Buckman hit a pair of free throws, but Russell Robinson scored a basket and was fouled. His free throw with 5:05 to play tied the game at 29-all.

Robinson dove for a loose ball and Chalmers connected with a three-pointer to put KU up 32-29.

Rush misfired on a three at the buzzer to make the score 38-37 at halftime of the Big 12 Tourney title game.

Kansas not only has the opportunity to get revenge today against a Texas team that whipped the Jayhawks two weeks ago in Austin, Texas when the two conference regular season co-champions meet in the 2 p.m. Big 12 Tourney championship game at American Airlines Center, but Kansas might even be able to improve its seeding for next week's NCAA Tournament.

"It's real big," KU freshman Brandon Rush said of the title game of the postseason tournament. "There's a debate out there who the best team in the conference is. This team is trying to prove it's us."

Kansas coach Bill Self said he isn't sure what a victory would mean for the Jayhawks seeding or site placement in the field of 64, but said a victory would definitely have some significance for his young 24-7 squad.

"It's a big game," KU coach Self said. "I don't think it's as big as next Thursday's or Friday's games (in NCAA Tournament). It certainly would be nice to have another piece of hardware for these young kids (that) some really good players weren't able to bring home. Hopefully, we'll play at a level to give us a chance to do that."

Watch out for the "Kansas Kids" baby!

that was awesome...they handed it right back to texas...way to go

don't forget Bill Self has also proven himself to be a precious coach KU has now..!!

congrats to our Jayhawks, darn proud we all are of you, thanks for the thrills and good luck in the NCAA tournament! Rock Chalk!

I think we have all learned from this tourny, rush does not have to have his A game for KU to win, someone always steps up!!!

Excuse me while i talk crap to my neighbor

All of us mile high Hawks are dancing!!! We're proud of you kids. Thank you for representing KU proudly! Denverhawk

I am so proud of the Baby Jayhawks right now that I can't even explain it. Only one room in our whole house had power and we had 26 people in it (max. occupancy is 5 by fire code) to watch them give the whoopin' right back to Texas. Does anyone know when the boys get back to town so we can give them the heroes' welcome that they deserve?

Uh, just to be clear and before people bash into me on this one-- in no way at all have I said that Hawkins is the end all, be all of this KU bball team. I have only tried to state that he is-- and has proven himself to be-- an integral part of this team. Glad he's on our team.

I had to watch the game...and bracketology...from 1,000 miles away on vacation, but I'm sure they could still hear us screaming! WhataRush, you are so right! If Reddick has a bad day, Duke loses, but someone always steps up in our games. We scored 80, but our leading scorer only had 15...now that's balanced. Rush is great, but we have an incredible TEAM. I'm so proud of our Baby Jays!!!

So, I was just wondering, off the top of my head of course, just how many of those people who just two weeks ago were calling for Hawkins' head on a stick and for him to be booted off the team-- are you still feeling that way? I said it then and I'll say it now: I am proud of Hawkins and I am glad that he is on this team. I am proud of the KU team, coaching staff, and all of KU athletics. I also said that Hawkins is not some hack-- Williams recruited him for a reason: he's a darn good ball player.

Go ahead, bash him if you like, but realize that his play speaks for itself. Without Hawkins, it is unclear whether this team would be as good as it is (good for sure, but as good? I think not).

Proud to be a Jayhawk!