The droplet, better than anything else, summarized KU's hard-fought victory, which was dominated by rugged defense.

"It was a war," Robinson said of the game that propelled the Jayhawks (23-7) into today's 3:20 p.m. game against Nebraska. "It was tough. We matched their intensity and were able to pull out a tough win." 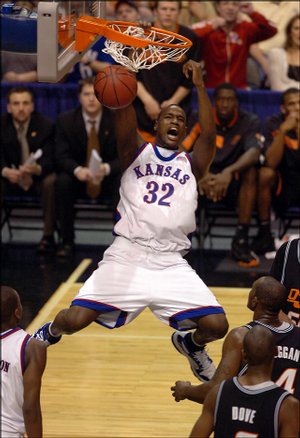 Robinson, who was clipped over the right eye by JamesOn Curry with 11:24 to play - Curry being called for an offensive foul after catching the KU sophomore with an elbow - wore a thick bandage above his eye the remainder of the contest.

KU's team doctor needed seven stitches - to match Robinson's career-high seven steals - to close the cut immediately after the game. Robinson was the last Jayhawk to exit the locker room after speaking with media members for about five minutes; his medical session took about 20 minutes.

"That was the first time in a long time I've actually bled," Robinson said. "It was an aggressive play on his part. I saw blood and said, 'Oh man.' When I first felt blood, I thought I'd be out awhile. Luckily, they got it patched up, and I was able to come back. There's no hard feelings over that."

KU coach Bill Self never doubted Robinson, who had eight assists - one off a career high - and five points to go with his seven steals, would return.

"If he was a boxer, they would have called the fight," Self said. "He's tough. He's going to be in there."

Robinson was in the game during the final crazy seconds. After Jeff Hawkins missed two free throws with seven seconds left - "I was really mad at myself. I felt I rushed the first one," Hawkins said - OSU's Byron Eaton hit a three.

Hawkins tossed an inbounds pass to Brandon Rush, who caught the ball as the clock ran out. Rush was wide-open, only because Julian Wright and Terrel Harris collided leaving a space for Rush in the backcourt.

No foul was called, and KU had its victory.

A reporter asked Self what he thought about the game ending on a "controversial play."

"I'm sorry. I didn't know there was a controversial play," Self said. "I could have called a timeout, but there was only 1.3 left. All we had to do was get it inbounds. I thought 'Hawk' did a good job getting it in. They jumped in front of Julian. Ninety nine times out of 100, they will not call that."

OSU coach Sean Sutton said, "I thought Jamaal, and I'm not sure who the other player was, did a good job trying to prevent the ball from going inbounds and got themselves in position. It was probably a judgment call."

Harris pretty much admitted as much.

"I tried to jump in his (Wright's) way. I guess they didn't call the offensive foul. I just tried to fall and made sure they (refs) saw me," Harris said.

Wright said as he "was about to go deep, they switched screens. I turned, and he (Harris) fell. I just continued my pattern. I didn't think they'd call anything on that."

Hawkins and Rush had good views of the play.

"At first I saw somebody go long. I didn't want to throw it that deep. I ran the baseline, saw somebody fall down and threw it to Brandon. All we had to do is get it in to win the game," Hawkins said.

Rush said: "Julian ran, and the two hit each other. I'm glad the refs let the play go. It was nothing much."

Tempers flared in the game, which Self said was won when KU went on a 7-0 run to close the first half and grab a 32-23 lead at the break. David Monds, who hammered Hawkins on a layup try, received an intentional foul call on the play. KU's Darnell Jackson shoved Monds, and Monds shoved back. The two received offsetting technical fouls in the second half.

"There was a lot of banging, shoving, clawing," Jackson said.

Self liked the style of play and fact his team survived such a dogfight - in which KU hit just 43.1 percent of its shots - missed eight of nine threes and made 18 of 30 free throws. OSU hit 10 of 21 threes, but just 38.3 percent overall.

"This is the kind of thing our team needed. Regardless of what happens the rest of the way, we needed to come here and fight, scratch and claw. We needed to grind out some wins, and that was a grind," he added, noting the Jayhawks only had three single-digit victories in the regular season.

Everybody survived the battle, including Robinson, who will play today after his yeoman, bloody effort.

"I'm sure he'll be fine for tomorrow," Self said.

"He'll get patched up and be ready to go. He's the toughest guy on the team," Rush gushed.

Good article and all... But who in the world is Nick Krug? I am absolutely amazed at the photography he got. It's like documentary shots. LJW... Whatever you're paying this guy... Double it and get him on paper. These are the best photographs of KU Basketball I've EVER seen. Great job, Nick!