It's an odd match - Jayhawk basketball, quilters and shoes for needy kids.

"We thought it would make a sports collectible and quilt collectible," Brackman said.

They also decided to solicit autographs from former players and coaches.

"My daughter found a lot of their addresses on the Internet," Rowden said, "and then we sent them a piece of a quilt block and asked them to sign it." 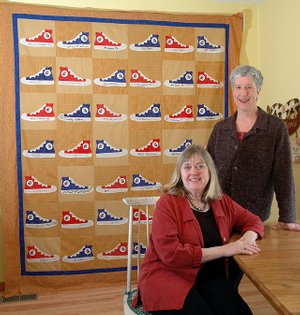 Some of Kansas University basketball's biggest stars are helping the Social Service League this year in its annual effort to buy shoes for Lawrence children. The league will be auctioning a quilt signed by 41 current and former KU basketball players and coaches on eBay. The auction is set to begin at 6 tonight. With the quilt Wednesday are designer and quilter Barbara Brackman, left, and quilter Deb Rowden.

Since late January, 41 players and coaches have responded.

"We didn't hear back from most of the pros," Rowden said. "That's understandable, I guess. But we really wanted to hear from Scot Pollard; he's our favorite."

Wayne Simien found time to reply. Greg Ostertag did, too.

A neighbor of Rowden's helped snare signatures from Danny Manning and Coach Bill Self.

Max Falkenstien, the "voice of the Jayhawks" for the past 60 years, is expected to come through.

"I just talked to his wife today, she said it's coming," Rowden said Wednesday. "Everybody has asked about Max." 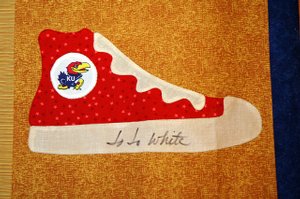 The Social Service League will auction a quilt made of up of autographs from 41 KU basketball players and coaches, including this block signed by Jo Jo White.

The quilt is 85 inches by 95 inches. "The background is a light tan," Rowden said. "It's meant to look like the floor in Allen Fieldhouse."

The Converse-style shoes are crimson and blue, each has a Jayhawk set in a white circle. The autographs run along the bottom of the shoes.

Proceeds from the sale will be donated to the Social Service League shoe fund.

Families are referred to the fund by teachers, social workers, school nurses and counselors. Parents are given vouchers for shoes at Payless ShoeSource, 3231 Iowa.