And, like always during the Wildcats' recent brush with success, such standouts never have hesitated to punch Kansas University right in the gut.

Chalk up 11 in a row for KSU in the Sunflower Showdown, and, once again, credit an influx of close-to-home products to help make it happen. Three of them scored in double figures for KSU in a 72-52 victory Tuesday in the opening round of the Big 12 tournament.

With the loss, KU (16-12) might have seen its once-promising season sputter to a stop, unless the postseason WNIT is interested. The Jayhawks will find out early next week.

"We just hope the committee gives us the nod," KU coach Bonnie Henrickson said. "We would be thrilled with the opportunity, quite honestly."

The Wildcats, meanwhile, will move on in the tournament and play second-seeded Baylor today. And they have a fleet of young playmakers to thank for it. 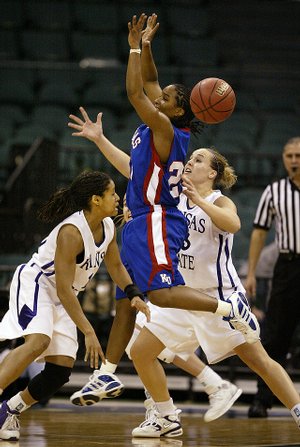 Kansas University guard Erica Hallman, center, is stripped of the ball by Kansas State guard Twiggy McIntyre, left, while the Wildcats' Kimberly Dietz also defends. Hallman scored 10 points but had eight turnovers Tuesday in the Jayhawks' 72-52 loss during the opening round of the Big 12 tournament in Dallas.

They're the new wave of local power to lead the Wildcats, after the phenomenal careers of Kansas natives Nicole Ohlde, Kendra Wecker and Laurie Koehn came and went. Koehn and Wecker were 8-0 against KU, and Lehning and Hamlin are off to a similar start.

Henrickson, now in her second year, is trying to play catch up in local recruiting. She has two Kansas products signed for next year and one, Taylor McIntosh, returning. But it may be a long-term fix, and in the mean time, the Jayhawks have been forced to take their lumps in the in-state series.

Tuesday's affair was all too familiar. KSU didn't waste many possessions, and Kansas couldn't climb back as a result. In addition, the emergence of Lehning as a scoring threat came as a huge help for KSU (19-9). She drained the first three points of the game and finished with three three-pointers.

"Tonight they were sagging off me a little bit," said Lehning, who had just three three's in 16 regular-season conference games. "When I made that first shot, it gave me confidence. I just tried to take whatever I could, and they were actually falling."

KU had four missed shots, two turnovers and a 12-0 deficit before Kaylee Brown hit a jump shot to put KU on the scoreboard. The Jayhawks eventually erased the early hole, but that was it for Brown's scoring - she was shut out the rest of the night, and it made it hard for the Jayhawks to keep up after catching up. 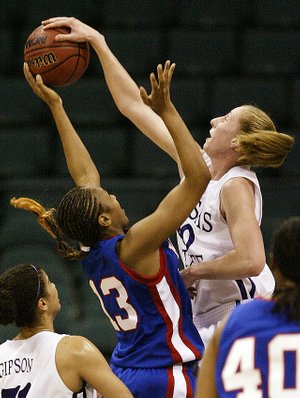 Kansas University's Taylor McIntosh, left, has her shot blocked by Kansas State's JoAnn Hamlin in the first half of the Wildcats' 72-52 victory. KU was bounced from the Big 12 tournament on Tuesday in Dallas.

"It's just undisciplined (shooting)," Henrickson said of Brown, who has two points on 1-of-15 shooting the last two games. "She knocks over the cheerleaders, then shoots a layup. For a senior, it's tremendously disappointing to be that undisciplined with the ball."

Brown's slump put scoring pressure on Crystal Kemp and Erica Hallman. Both reached double figures, but Hallman had eight turnovers and Kemp scored only 13 points - six below her season average.

KU has lost 12 of 16 after starting the season 12-0. Still, KU officials are confident that a WNIT invitation may be extended, meaning the season still can wrap up with the same satisfaction as it started.

"I definitely would like to play on," Hallman said. "We haven't made it to the postseason since we've been here. If we get the opportunity, we just have to make the best out of it."