*-KU clinches share of title with victory over 'Cats

Instead, they danced in delight amongst themselves in their tiny, steamy visitors locker room, relishing and rehashing a 66-52 victory over Kansas State that extended KU's winning streak in Manhattan to 23 games, and, more importantly, wrapped up at least a share of the league crown.

"It was crazy. Everybody was jumping around. Coach was jumping around," freshman guard Mario Chalmers said after the Jayhawks claimed their second conference title in two seasons, sixth in 10 years of league play and 49th overall in school history.

"Everybody was laughing, jumping. We had so much energy," freshman forward Julian Wright added. "It was crowded, (but) nobody got hurt."

The Jayhawks, (22-7 overall, 13-3 in the league) seemed disinterested in today's Texas-Oklahoma game. If OU wins, Texas (12-3) would drop into second place and give KU sole possession of the title.

"The way I see it is, we get a ring either way," senior guard Jeff Hawkins said with a shrug. 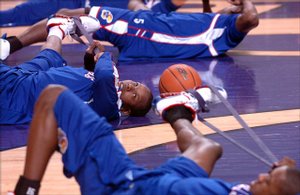 Hawkins was one of the happiest Jayhawks, breaking into a big grin as he dribbled out the clock to a chorus of boos from K-State fans.

"I was happy, man - happy for a lot of reasons. I was smiling for myself, my teammates, coaches, all the fans," Hawkins said.

KU coach Bill Self now has won six titles in his 13-year career (Oral Roberts didn't play in a conference when he worked there).

He was thrilled after his team - which saw a 15-point halftime lead dip to three the second half - held on.

"It was the happiest locker room we've had this year," Self said, adding, "I love this team. This (title) is sweeter than any others we've had because we started out 1-2. We were not very good.

"I take more pride in a team that is not expected to do it than one that is expected to win."

Amazingly, the Jayhawks, who received a career-high-tying 24 points from Brandon Rush and 14 first-half points from Mario Chalmers that helped build a 39-24 lead, finished a game better in the standings than last year's co-championship team.

And that squad was full of veterans.

This year's team consists mostly of underclassmen; the top seven scorers are freshmen and sophomores.

"Maybe not a miracle," Self said of the Jayhawks' battling back from a 1-2 mark, "but it's the best. It's unbelievable to me that our team - three freshmen and two sophomores starting, young guys playing all the minutes - could go 13-3 in this league when a veteran team struggles to go 12-4.

"To think we have better record than last year's team is unbelievable."

"Part of it is they are blindly loyal. I say blindly loyal, you give 'em something to try, they do it," Self said of his squad, which won by 14 despite hitting just 37.7 percent of its shots and holding KSU to 37.5 percent marksmanship.

"We had our first talk three days ago about the ball maybe sticking in hands, not moving like it should. Last year we talked about it on a regular basis. It's a bunch of young guys just playing to win with no agendas, at least yet."

Saturday, KU's league title appeared in jeopardy as Cartier Martin heated up for 10 points as the Wildcats sliced the gap to three points, 46-43, at 11:53.

Wright tipped in a rebound of a C.J. Giles miss and on the ensuing possession stole the basketball and flipped ahead to Rush, who dunked. Russell Robinson, who was steady as usual with 11 points and five assists in 37 minutes, then hit a three, and KU led, 59-47, at 5:47.

"I tried to get aggressive," said Wright, who finished with four points and six boards with four steals in 32 minutes. "I made the shot (tip), then hit the ball and passed it to Brandon. We all had to dig down and hustle, do things like get tips at the glass."

KU forced 21 turnovers in the contest while committing 15. The Jayhawks had 13 steals to KSU's five. Standout Martin missed seven of his 12 shots, and the Cats never got into the flow offensively.

"It's great to come here and win," Wright said. "This team fought through a lot of adversity this year. We did what we had to do."

That is, win 12 of 13 games after opening with a win at Colorado and losses to K-State and Missouri.

As far as today's 3 p.m. game between OU and Texas, Self said he'd watch it, but not with much interest.

"I would rather win it outright," the coach said. "Still, there will be 2006 on the (championship) banner hanging up there (in rafters of Allen Fieldhouse)."

I am so proud of everyone,coaches,players,and the Jayhawk nation.. "GO Hawks"

This team is so impressive, as is Coach Self. They have the most refreshing attitudes about the game, in my opinion. I can't wait to watch them in the NCAA. But, even if they don't go far (which I expect they will), they have accomplished so much this year that we should all be proud and excited about the future.

ok ok so i was wrong. this team became a team. coach self did know what he was doing. now i can wear my jayhawk cap proudly while in las vegas next week. way to go team!

This team is good. They have come so far and I look forward to the exciting end to this season and the NCAA tounamant~ Go Jaywaks!..

Way to go Hawks! No one would think a team so young could do so well in the Big 12. This is a very special team that is getting better every day. We still have a long way to go however. A rematch against Texas in the Big 12 tournament would go a long way to improve experience and confidence.

Boy, I was depressed in January. But I'm feeling much better now. I see us in the Sweet 16 this year; final 4 next year.

I am also more and more impressed with Julian Wright. True, he wasn't spectacular against KSU, but he's the one player who I see continues to improve almost every game. It's HE who the NBA should be looking at...his skill set is more well-rounded than Rush's.

But, one thing I think is over: talk of losing any player to the NBA. I think they all see now that they have a mission to accomplish before they move on. And each could benefit from another year, certainly.

Never would have guessed the young Jayhawks would win the Big 12 Title.

But oh, What could have been, yes I know all about the coulda, whoulda, shoulda's. But lets look at where this team could be minus a few things, we don't go to Maui, we are than 20-5, we don't choke away KSU and Mizzou 23-3 and 15-1 in conference.

Now I am a firm believer, in the fact that Maui made us a better team, and the record since KSU and Mizzou says we are a better team because of the way be beat teams. But man, 22-3, with this team would have been unimaginable, and quite possibly not something this team needed in it's first year.

I'm interested to see a team who, for once, (as coach put it) is "blindly loyal." I team reminds me A LOT of the '88 championship team (minus a one-man senior leadership in Manning.)

I think this team has the heart to go all the way... I, up to a few weeks ago, had them slated to go out right before the Sweet 16. However, I am starting to see glimpses of a Final Four contender. It really does, at this point, depend on which region we get. Up until their losses to FSU and UNC, I would have slated Duke as the biggest threat in the tournament. However, UConn is starting to look real scary. I think on a good night KU has as good a team as any. Consistency is an issue (as it should be with Freshmen), but if Rush and Wright get on fire you can kiss whatever team we are playing goodbye.

I am looking forward to an awesome post-season this year! Rock Chalk Jayhawk, GO KU!