Ames, Iowa — Perhaps the only way left for Iowa State to put the magic back in Hilton Coliseum would be for the Cyclones to play naked on Sundays.

And Saturdays certainly haven't been successful for the Cyclones this season. They have just one victory in eight games played on Saturdays.

Perhaps it should have been no surprise, then, that Kansas University handed ISU its third straight home setback, 95-85, Saturday and hung the most points by a conference opponent inside Hilton since a No. 1-ranked Missouri team recorded a 95-93 victory Jan. 31, 1990.

"I can't even explain how frustrating it is," ISU forward Rahshon Clark said after KU's victory. "We're the home team. We should not be losing at home." 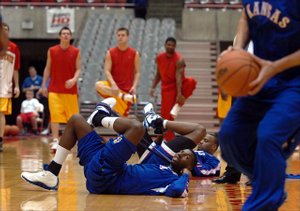 Iowa State coach Wayne Morgan was just as flustered when reporters asked him about his squad's fifth loss this season in Ames - one more setback than the Cyclones had at home the past two seasons combined.

"Our crowd gives us our home-court advantage," said Morgan, who said the capacity crowd of 14,092 fans did its part against Kansas, but the Cyclones (13-7 overall, 3-4 Big 12 Conference) "should have played better."

While Cyclone fans might not have been quite as crazy Saturday as in years past when KU came to town, the crowd came to life even when the contest seemed all but over in the second half.

As soon as KU recorded its largest lead of 62-46 at the 11:45 mark, ISU guard John Neal responded with back-to-back three-pointers. A jumper by leading scorer Curtis Stinson made it an 8-0 ISU spurt.

But the Cyclones came no closer, and the Jayhawks left Ames with their fourth victory in their last five trips.

"It seemed like they could not miss," said Stinson, who after scoring 27 points in three consecutive games just missed the mark against KU with 24 on 8-of-22 shooting. "Kansas came in here laid-back, Kansas came in here ready. They got open looks, they took them, and it was going down."

It seemed like every time Iowa State made a run, Kansas had an answer - even from the beginning, when ISU broke out its nontraditional yellow uniforms, which the Cyclones wore when they defeated Colorado State for the Rainbow Classic championship before Christmas in Honolulu.

Perhaps last year's loss to KU at home in the yellow hue should have been a sign that ISU should have stuck to its red road uniforms. After all, the Cyclones crushed Missouri, 82-58, Wednesday and knocked off Nebraska a week and a half ago.

But after Texas A&M's 86-81 overtime victory a week ago in Hilton, coaches decided late this week that scrapping the home whites could create a spark.

"A lot of teams have lost at home and won on the road," Stinson said of this year's strange Big 12 results. "When we're on the road, I think guys are more relaxed. You can't come in here and be all uptight and all thinking about the game too much. I don't know what's the real deal."