After decades on air, retirement will leave big void for KU fans

A few seconds after he'd worked his way past security and into the Jayhawks' dressing room, veteran broadcaster Max Falkenstien fielded a warm, friendly - but unexpected - greeting.

It was Michael Lee, a popular reserve guard from last year's basketball team who had recently signed with the Harlem Globetrotters.

Falkenstien smiled as they shook hands.

There wasn't time to chat. A crowd of well-wishers had gathered around Lee and Kansas University had just trounced the Yale Bulldogs, 87-46, so Falkenstien needed to get ready for his postgame interview with coach Bill Self.

Quickly, Lee explained he was in town for a checkup for an irregular heartbeat. He wanted Falkenstien to know because the "Voice of the Jayhawks" cares.

Despite their generational differences, Falkenstien, 81, and Lee, 22, are friends.

"Max is cool," Lee said afterward. "As soon as you get here people start telling you, 'That's Max Falkenstien. He's been here forever.' So even before you meet him, you respect him. And then when you meet him, he's always nice. He always says hello. It's like you can't go wrong with him." 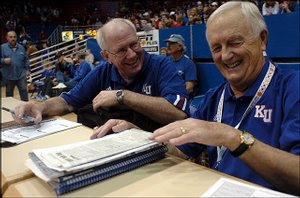 Lee isn't alone. Falkenstien, it seems, has more friends than Kansas has sunflowers.

Some, like Wilt Chamberlain or coach Phog Allen, have been famous. Most are not.

"I was with Max at the (KU vs.) K-State football game this year," said Jim Marchiony, KU associate athletics director. "It took us 20 minutes to get from the parking lot to the press box because so many people stopped to talk to him - and these were K-State fans!

"Whenever you're on the road with Max, it's like you're with the mayor of whatever city you're in," he said. "It's amazing."

Late last summer, Falkenstien announced he would retire after the 2005-06 men's basketball season. Sixty years behind a microphone, he said, was enough.

"I'll miss it terribly," Falkenstien told the Journal-World. "But I think this is a good place to stop. I don't want to overstay my welcome."

Though he underwent emergency intestinal surgery Sept. 7, Falkenstien said he was in good health.

"My surgery was completely unexpected and had no relationship to my decision to retire," he said. "As far as I know, I'm in good shape. Of course, something could happen tomorrow. You never know."

Falkenstien's exit will mark the end of an era.

"I can remember my father listening to Max on a battery-powered radio out on the farm," said Dr. Earl Merkel, a 73-year-old KU Medical School alumnus from Russell.

"In Kansas, everybody identifies with him," Merkel said. "They may not have met him, but they know his voice. They feel like they know him."

"Max is an institution," said John Clarke, a 1979 KU graduate who lives in Hays. "He is synonymous with the Jayhawks. When you hear him, you think of KU."

Falkenstien and his play-by-play partner, Bob Davis, have a one-of-a-kind relationship.

"I don't think we've ever argued or had a disagreement," Falkenstien said.

Both are native Kansans. Falkenstien grew up in Lawrence, Davis in Hays.

Neither is young. Davis is 61.

"When you stand the test of time like they have for 22 years, you must be doing something right," said Tom Hedrick, a veteran broadcaster who competed with Falkenstien from the late 1940s into the early 1960s.

"It'll be difficult for anyone else to do what Bob and Max have done because people move around so much now," said Hedrick, who's semiretired and lives in Lawrence.

Falkenstien and Davis have stayed put.

Both have other jobs. Davis is play-by-play announcer for the Kansas City Royals. Falkenstien was senior vice president of marketing for Douglas County Bank for 25 years. He remains an occasional consultant.

He'd been told he had a good voice for radio, so he applied.

"Arden Booth, who a lot of people will remember, had been called into the service," Falkenstien said. "I got the job, but it had nothing to do with sportscasting. I was just a staff announcer."

Falkenstien graduated from LMHS in 1942, six months after the Japanese bombed Pearl Harbor. After a semester at KU, he enlisted in the Army Air Corps in hopes of becoming a meteorologist.

Falkenstien returned to Lawrence. He'd been in town about a week when his former boss at WREN asked him to broadcast a basketball game in Kansas City that pitted KU against Oklahoma A&M (now Oklahoma State University) in the NCAA district finals.

"Back then, it wasn't like it is now. People didn't expect to hear a game on the radio. They'd read about it in the newspaper," he said. "What we were doing was new."

Falkenstien stayed at WREN until 1967, when he had a falling out with the station's owner, former Kansas Gov. Alf Landon.

The Big Eight Conference wanted him to be the play-by-play announcer for its televised "Game of the Week."

"Back then," Falkenstien said, "there was only one game a week that was televised. So this was a big deal for me."

But Landon refused to let his station manager, Falkenstien, appear on television.

"I kept saying it would make me more sellable - that would be good for business," Falkenstien said. "But he just didn't get the concept."

Falkenstien jumped to WIBW-TV, where he continued to broadcast KU football and basketball games.

In 1984, KU decided to put the broadcast rights to its basketball and football games up for bid. Before then, Falkenstien and Hedrick broadcast the games for different stations.

Learfield Communications, a company based in Jefferson City, Mo., won the bid in 1985. It brought in Davis, who had been broadcasting Fort Hays State University games for 16 years. Falkenstien was offered the sidekick role.

"I had a lot of misgivings at first," Falkenstien said.

But Davis welcomed the chance to work with Falkenstien.

"I know this sounds a little corny, but when I was growing up my heroes were sportscasters, and Max was one of the first ones out there," Davis said. "He was a pioneer."

"Bob and I try to keep things in perspective," Falkenstien said. "Games are supposed to be fun. They're not the end of the world."

He added: "It's like Dr. (Phog) Allen used to tell his players. He'd say, 'Remember, guys, there are 300 million Chinese out there who don't even know who we are.'"

Falkenstien said he and Davis keep the game simple, their delivery conversational.

"Too many color commentators are too analytical," Falkenstien said. "They lose the average fan."

Neither Davis nor Falkenstien pretend to be experts.

"I remember one time, I had to ask Roy Williams what a 'secondary break' was, so I'd look smart," Falkenstien said, laughing.

In the game programs, Falkenstien used to be listed as color analyst.

The broadcasts are not as laid-back as they appear. Davis scrambles to keep track of fouls and points while Falkenstien plucks statistics from a nearby monitor, lifts tidbits from the day's sports pages and pulls trivia from packets provided by the teams' athletic departments - all while the game is going on, all without missing a beat.

Contrary to popular opinion, their press-row seats across from the KU bench are not the best in Allen Fieldhouse.

They cannot see the scoreboard without leaning back and looking straight up. They are so cramped they cannot stand or cross their legs. Many times, a referee blocks their view.

During the Yale game, Davis barked "there's a turnover" without mentioning who had stolen the ball from whom. That's because he couldn't see the play; referee Steve Welmer was standing in front of him, less than an arm's length away.

After the game, Falkenstien is the first - and only - member of the media allowed to meet with Self in the coaches' dressing room.

When they finish, Self leaves for a meeting with the press corps at-large. He uses a back door.

Falkenstien leaves through the front door, where hopeful fans wait for autographs. He is an easy target.

"Max! Max! Over here!" said Genie Gnagi, standing behind her 6-year-old daughter, Michaela, with a miniature plastic basketball. "May we have your autograph, please?"

Without hesitation, a smiling Falkenstien complies.