Austin, Texas — Brandon Rush scratched his head as he sat dejectedly on Kansas University's bench, suffering quietly as the final seconds ticked off the clock Saturday night in the Erwin Center.

Texas 80, Kansas 55 is not what he envisioned prior to the start of the battle for first place in the Big 12 Conference.

"I thought it'd be another close game, not like that," said Rush, who inexplicably scored a career-low three points off 1-of-8 shooting as KU suffered its worst loss in the Bill Self era, surpassing a 21-pointer to Villanova last season.

"It was embarrassing. They manhandled us, outrebounded us, whipped us."

He and the Jayhawk players and coaches offered no excuses after the Jayhawks' worst setback since an 84-53 decision on Dec. 3, 2000, at Wake Forest. 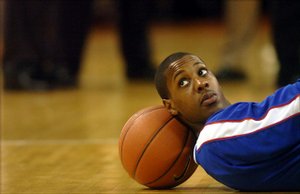 LaMarcus Aldridge scored 18 points off 9-of-10 shooting with eight boards. He had 12 points the first half off 6-of-6 shooting. Freshman guard A.J. Abrams also had 12 the first half, canning four threes in four tries.

Abrams finished with 12 points, while P.J. Tucker, who was held to two the first half by Rush, rallied the second half to finish with 19 points off 6-of-13 shooting.

"We played bad," KU coach Self said of the Jayhawks, who hit four of 15 threes to Texas' 10 of 20. The Longhorns torched the best defense in the country for 55.1 percent shooting.

"But that was due in large part to them," Self added. "I've not seen all the teams, but they were a team that can challenge for it all, tonight. They'd be tough for anybody to deal with. They were way too much for us tonight.

"Our team has done well. To play with a team that has a chance to win it all, especially at their place, we have to take another big step. The way it ended up, I told our team there's another big step we need to take," Self added.

7 KU's rebounds in the second half

Gibson, a sophomore standout, had six points, and Tucker, a junior, four in the run.

"I thought there were some men playing against five guys not quite as old," Self said, "especially when Tucker, Buckman (Brad, 12 points, nine boards) and Aldridge were out there. They combined for 25 rebounds. Our big guys combined for 10 collectively. That's a tell-tale sign of some mature guys against some not-as-physically strong guys."

Texas - which avenged last year's 25-point loss to KU last year in Lawrence, also a game played as part of ESPN's Game Day extravaganza - went on a late 9-0 run to stretch a 71-52 lead to 80-52 before Jeremy Case hit a three to slice the deficit to 25.

"They're one of the best teams around," said KU's C.J. Giles, who had eight points and four boards. "If we were ever going to lose to a team, I thought it might be Texas because they are really, really good. We'll just come back harder the next time."

Down one game in the standings, KU will meet Colorado at 7 p.m. Wednesday at Allen Fieldhouse and travel to Kansas State on Saturday.

Texas travels Wednesday to Texas A&M and finishes at home versus Oklahoma on Sunday.

Nobody yet conceding the Big 12 title yet.

Perhaps we can stop all this talk about how Brandon and Sasha are ready for the NBA. They need several years of development. This game just shows how young and undeveloped their skills are. In 3 years they will be able to play very differently. There's just not enough empahsis on the fact that it takes time to develop the skills necessary to be a top notch player.

Yep, the one thing it does is make Rush realize where he belongs for another year. (And right now, the buzz should be on Wright, not Rush or Kaun.)

LETS NOT GET DOWN OR UPSET OVER THIS LOSS,WE WILL TAKE CARE OF BUSINESS AGAINST COLORADO,THEN KANSAS STATE,AND THEN WE WILL PLAY HARD IN THE BIG12 TOURNAMENT AND SEE WHAT HAPPENS,THIS IS A POTENTIALLY GREAT TEAM,THE BEST IS YET TO COME!! ROCK CHALK JAYHAWK GO K.U!!!!

I think the only way to learn is from experience, and I sure hope our players learned. This is a young team, and the only way to go is up. We're going to give it our all against Colorado and have sweet revenge on K-State. I'm looking foward to a good season in the Big 12 Tournament. But, don't forget about Max. We will miss him, he is a legend. If you don't already listen to him every game, I would suggest you do. We'll miss you Max! Rock Chalk Jayhawk!

Go hawks! A loss does not bother me, we must stay the course and take care of business against CU and k-state. Lets us work hard and win our last 2 games, and go into the conference tournament strong. I want a rematch with UT in the championship game. We can beat them on a neutral floor.

ku had a bad game its over... learn from it and dont make the same mistake twice... play colorado and k state beat them and hope texas loses a game against oklahoma or texas a&m... if not do good in the tournament and revenge will come in the tournament

Yes, our guys made some mistakes, did some things wrong, but lets face it, UT made them look bad. I swear sometimes it looked like Aldridge couldn't see the basket through the hands, and the ball still went in. Who shoots a sky hook anymore? And it went in! I looked and looked, and I just didn't see a way to stop him, short of throwing bodies at him to hack him to death. Our ball movement was fantastic, and yet still the UT defense moved with it and kept the 'Hawks out. UT came to fight, and weren't going down without one... and the Jayhawks didn't give them one.

Then again, you're right... game's over. Learn, win out, and let's get to dancing.