Troubled running back finished at Kansas

Former Kansas University running back John Randle was back in the news again Friday, but this time his actions were related to football instead of the law.

Southern Illinois coach Jerry Kill announced that Randle, who had six run-ins with police since arriving in Lawrence in the fall of 2003, has transferred to the university located in Carbondale, Ill.

"After sitting out last year, it's going to take him a little while to get into it," the Salukis coach said in a statement released by SIU. "But he could make an impact later on in the season, kind of like Brandon Jacobs did (in 2004). Do we know that yet? No. But we're very fortunate to be able to give him a second chance."

The 6-foot, 185-pound junior from Wichita Southeast's most recent skirmish came April 15, when he was given a citation for disorderly conduct and battery when he allegedly slapped a 19-year-old woman who tried to break up a fight between Randle and Jerome Kemp (who was not cited). Kemp and Randle were high school and KU teammates.

Randle, who is enrolled in fall classes at SIU and took part in the Salukis' first day of practice Friday, led the Jayhawks in rushing in 2004 when he ran for 540 yards. He also caught 35 passes for 274 yards and led KU in scoring with nine touchdowns - the biggest of which was a 43-yard highlight-reel run against Kansas State that helped end the Wildcats' 11-year win streak over KU. 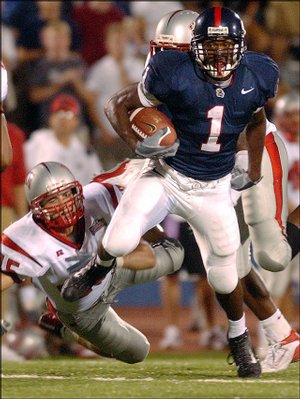 Kansas University's John Randle (1) escapes UNLV's Daniel Jones in this file photo from 2003. Randle, the Jayhawks' leading rusher in 2004, has transferred to Southern Illinois after his troubled times in Lawrence.

As a true freshman in 2003, Randle played offense and defense, earning honorable mention All-Big 12 Conference honors. Randle was the Jayhawks' third-leading rusher with 503 yards and also had 22 tackles from the cornerback position.

But his problems on the police blotter overshadowed his prowess with the pigskin.

Randle was kicked off the KU squad March 14, 2004, after a series of arrests, including being charged with battery after allegedly hitting a man outside It's Brothers Bar & Grill, 1105 Mass. Then, following another battery arrest on April 16, 2005, KU coach Mark Mangino promised to keep Randle on scholarship if the Wichita native chose to remain at Kansas and get his degree.

Randle, who has two years of eligibility left at SIU, declined outside football interest from several universities and stayed at KU - causing speculation that he had a chance to play football for the Jayhawks again.

That talked vanished after the fight with his teammate, but SIU's Kill has been known to take chances with other players who have had trouble on Division I-A campuses.

"Coach Mangino, who I know very well, said he's a guy who could have been a prolific Big 12 guy," Kill said of Randle, who chose KU over Kansas State, Colorado, Michigan State and Missouri after compiling 1,757 yards and 17 scores as a senior at Southeast.

"He's that type of athlete. He has tremendous skill and football instincts."

lots of people. the rumor is finally dead.

So Coach Kill (an ironic nickname if ever there was one) says, "We're very fortunate to be able to give him a second chance." What has this coach been smoking? It's a seventh chance, not a second. Good riddance, and what a shame that no matter how much of a punk someone is there's always someone willing to overlook it if he's a talented athlete.

I don't wish anything bad for John Randle. He has caused enough tragedy in his own life from being young and stupid. Some day the lightbulb will come on for him and he will realize what an opportunity he threw away here at KU.

I wouldn't bet a nickel on it but perhaps his last run-in with the cops that destroyed his chances of coming back on at KU was the run-in that he needed to finally open his eyes. Unfortunately the more likely occurence is that having the privilege of playing college ball still at his fingertips despite all of his screw ups will make him feel even more entitled to be a jerk off.

For his sake and for the sake of the people at SIU I sincerely hope I'm wrong. Most kids that have had this much trouble will continue on that same path until they are left with nothing. I would like to see him be one of the few that realizes his mistakes early enough to pull out of the nosedive so he can do something positive with his life.