After two long days at the Kansas Relays, Baldwin High sophomore Heather Garcia was ready for a nap.

No one would argue she earned it.

The distance specialist made a big impression with her second-place showing in Friday's 3,200 meters, then followed up on day two with a third-place time in the 1,600 of 5 minutes, 7.44 seconds and cementing her status as the girl to beat in both events at next month's Class 4A state meet in Wichita.

"It was great. It was exciting. It feels good to be done, though," Garcia said. 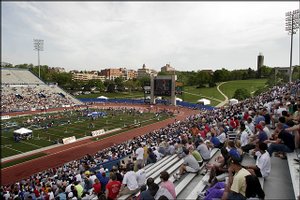 As hyped as Garcia was by her own races, she also relished Baldwin's strong all-around performance during a two-day event loaded with Class 6A and 5A entrants.

"We're such a small school," Garcia said. "It's nice to hear our names being announced."

Wright soars to records: As soon as he went airborne on his second attempt, Jeremy Wright knew he had done something special on the big stage of the Kansas Relays.

"It felt real good off the board," said the Baldwin High senior. "I just knew I had to finish it."

Jake Sharp - a Kansas University football recruit out of Salina Central - won the event after a jump of 23-01â2, while Ryan Jones of Liberty (Mo.) edged Wright for silver at 22-91â4.

"I've never been here before, and it was a great day to long jump," Wright said. "I was feeling it."

Woods fourth in 100: Mill Valley junior Justin Woods is a harsh critic of his own work.

The speedster entered Friday's boys 100 prelims seeded 17th in a 40-man field, a spot that typically leads only to one trip down the track.

Instead, Woods turned in the the seventh-fastest time to earn a spot in the finals, then followed up Saturday with a 10.91 sprint to finish fourth in one of the Relays' marquee events.

"If you don't get first place, you always think of something : like, I should have trained harder," Woods said.

The lone Kansas entrant to finish ahead of Woods was Sharp, who took second in 10.76.

"I thought I did an awesome job," Mundy said. "I didn't think I'd do well with the upperclassmen, and I proved I could."