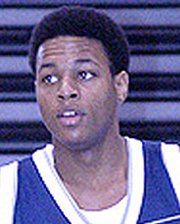 The long -- and tumultuous -- wait for highly-touted basketball recruit Brandon Rush is finally over.

The 6-6, 200-pound guard/small forward from Kansas City, Mo., received word Friday afternoon from the NCAA Clearinghouse that he has been ruled eligible to play for Kansas University during the upcoming 2005-06 season.

Rush -- who obtained a KU student ID number and enrolled in classes a week ago -- was just waiting clearance from the NCAA's governing body before making his intentions known publicly that he chose to play for the Jayhawks over Illinois, Indiana, or jumping straight into professional basketball.

"I'm very happy about coming to school and getting this out of the way," said Rush, in an interview Friday afternoon from KU's Parrott Complex after he had finished playing in a pick-up game with his new Jayhawk teammates. "It's a great school, great basketball. It's a great coach and it has great history. It's close to home. I just like it."

University of Kansas head coach Bill Self confirmed that Rush was indeed cleared and is now officially a member of the men's basketball team.

"Brandon and his family rightfully have been waiting for positive feedback from the NCAA Clearinghouse concerning his eligibility," Self said, in an official release issued by the KU athletics department. "We received information from the Clearinghouse today and Brandon is eligible to pursue a college career this academic year."

The younger brother of former Missouri Standout Kareem Rush and one-time KU recruit and former UCLA player JaRon Rush, had initially declared for this past summer's NBA draft before pulling his name out when it became clear he would not be a first round draft pick. By doing so he saved his NCAA eligibility.

Then starting at the end of July, Rush's search for a school intensified leading into a month long sage that saw the 20-year-old visit KU, Illinois and Indiana in the span of 10 days.

But Rush -- who attended three Kansas City high schools before finishing his prep eligibility at Mt. Zion Academy in Durham, N.C., where he averaged 21 points, six rebounds, and five assists last season -- ran into trouble with the NCAA Clearinghouse because of the large amount of transcripts and data it had to sort through on him.

"One thing about the Clearinghouse ... they take cases in order. You take a number and get in line. He will not get to move up in line just because he is a Kansas recruit," said one source with knowledge of the NCAA procedure.

But now Rush's sealed commitment cements perhaps not only one of the best recruiting classes in Kansas history, but college basketball all together.

Along with Rush, KU freshmen Mario Chalmers, Julian Wright and Micah Downs are already being nicknamed the Fab Four, an homage to Michigan's Fab Five of Chris Webber, Jalen Rose, Juwan Howard, Ray Jackson, and Jimmy King who guided the Wolverines to the 1992 NCAA Tournament championship game as freshmen.

Rush said he chose Kansas, in part, because of the close friendships he has with the other freshmen and the potential the class has to do something exciting together.

"I was really interested because Mario, Julian and Micah," said Rush, who often played in summer AAU tournaments against the three Jayhawks. "I think it will be a really good fit for us. We all came here to play as hard as we can and win."

Self said despite the drawn out process of Rush's recruitment, he was very happy of obtaining a player of Rush's talent literally weeks before the season begins.

"Brandon is a very versatile perimeter player that has excellent ball handling skills. His size and athletic ability will allow him to defend on the perimeter," Serlf said. "We feel the addition of Brandon will help make this young but talented team even more versatile this season."

While many fans and media members assume that because Rush declared for the NBA draft last season, he would play only one season in Lawrence. But both Rush and Coach Self said such speculation is premature.

For more on this developing story, watch 6News tonight at 6 p.m. and 10 p.m. on Sunflower Broadband channel 6, and pick up a copy of Friday's Journal-World.