Case can’t wait to get on floor

In his mind, Jeremy Case sees himself stationed beyond the three-point line, burying jumper after jumper as the Allen Fieldhouse crowd goes nuts.

Mentally, he says he's sharp, ready to join the deep list of long-range bombers who have worn a Kansas University men's basketball uniform.

The question now is how exactly his physical tools will shape up after a year away from game-day competition.

"I'm very, very anxious. I can't wait to get out there," said Case, a sophomore guard who took a red shirt last season after struggling to overcome a groin injury. "It feels like I haven't played in ages."

Case arrived on campus in 2003 from McAlester, Okla., with a reputation as a big-time shooter. He saw limited action as a true freshman, playing in 21 games and averaging 1.2 points per game. Of his 26 points, 18 came via his favorite weapon, the three-pointer.

The Jayhawks never have been shy about using the three as a major offensive weapon, starting with Kevin Pritchard in the shot's inaugural 1987 season and passing down through such gunners as Terry Brown, Rex Walters, Jeff Boschee and Kirk Hinrich.

"That's something I would definitely love," Case said. "I'd love to play and shoot like them. I haven't done it, but I feel I can."

With KU in the midst of a major youth movement, Case is one of the few remaining players on the roster with links to the Roy Williams era. He was one of Williams' final recruits, signing with the Jayhawks during the 2002-03 season that proved to be the coach's final one in Lawrence. 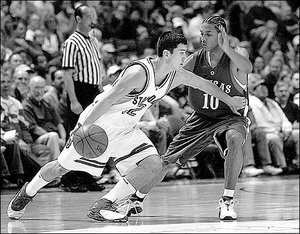 After taking a year off to recover from a groin injury, Jeremy Case says he's "anxious" to hit the hardwood again.

However, unlike the remainder of the roster, Case also had a tie to incoming coach Bill Self. Case's dad, Win Case, and Self were teammates at Oklahoma State in the 1980s. The elder Case has also proved to be a successful coach at the collegiate level, leading Oklahoma City University before taking over as the head coach and athletic director this fall at Eastern Oklahoma State College.

"He's known coach Self for a long time," Jeremy Case said. "He just told me it would be a great situation for me. He was very excited for me to come and play for coach Self."

Just how much Case will get to do so depends on his ability to stretch opposing defenses. With the bulk of the scoring gone from last year's squad, the Jayhawks will be looking for points anywhere they can get them.

Should Case prove himself fully recovered from last year's physical ills, the opportunity to be a significant contributor will be there.

"He's our best shooter on our team. I would say easily our best shooter as far as perimeter shooting," Self said. "If he can continue to work and get stronger ... he's a guy who can make the team a lot better.

"He brings a dimension ... that has to be dealt with. His red-shirt year really helped him."

Case also thinks that's true. Now, he just has to show it.

"Most of all, he (Self) wants me to shoot it. And that's what I plan on doing," Case said.

"When the shot comes, I have to take it. ... Once they keep coming, then my confidence will go up and it will be downhill from there."