Leavenworth — Wayne Simien, who bought his dad a bass boat a couple of weeks ago in anticipation of a hefty payday on NBA Draft Day, never feared his ship was sinking Tuesday night when just two picks remained in the lucrative first round.

"I wasn't nervous at all. We'd gotten a call early in the night from Miami saying if I was still around at that time, they'd pick me," Simien said of the Miami Heat, who, as promised, tapped the former Kansas University power forward with the 29th overall pick.

The selection - announced by NBA commissioner David Stern on ESPN - caused quite a commotion in Simien's Leavenworth home, where 25 close friends and family members gathered. Also, at Warren Middle School, where 200 fans cheered wildly while watching on a big-screen TV.

"People were happy, hugging. Some were crying. Wayne almost shook me to death," Simien's dad, Wayne Simien Sr., said of his son's reaction in a room in which just Simien, his parents, pastor and agent watched.

Kansas coach Bill Self and others were seated in an adjacent room at the time of the announcement.

"I was nervous. We all were nervous. It caused some tense moments in the house," Self said of the first round nearly being complete before Simien's selection. "Wayne was the calmest person there. Miami had assured him he'd be their pick.

"I was really happy. It's the best possible scenario for Wayne, playing with Shaq and Dwayne Wade," Self added.

Indeed, Simien, who after his selection left his house for the Middle School, where he entered and high-fived well-wishers lining an entryway, said playing in Miami classified as a dream come true.

"To be with one of the most dominant players to ever play the game and one of the blossoming stars; to play for Pat Riley (Heat president), who has won all kinds of championships; and the possibility of playing time : it couldn't be a better fit," Simien said. 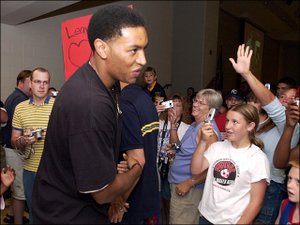 Simien, who under terms of the old bargaining agreement would be paid $2,245,500 over the next three years (the new agreement should pay a similar figure), could play significant minutes for a team that might lose Udonis Haslem to free agency and has aging backup forwards in Alonzo Mourning and Christian Laettner.

"Things worked out pretty close to exactly as we hoped today," Heat general manager Randy Pfund said. "Wayne is the unanimous Big 12 player of the year. He's a 20-(points)-and-10-(rebounds) guy, scores and rebounds every night. We got good reports all the way around on his character.

"We've seen Wayne for four years," Pfund added. "He's probably one of the most-scouted guys. : I'm sure I've seen him seven or eight times, and all our scouts had seen him multiple times."

Simien, who had 16 pre-draft workouts, did not work out in Miami.

But he was prepared : wearing Miami Heat black at his draft party Tuesday.

"And I've already got the sandals," he said, pointing to the footwear he'll be using on Miami's beaches.

"I know all of you will want to visit me in February when it's freezing here and 80 in Miami," he quipped.

Maybe dad will bring the new bass boat - Simien's only planned expensive purchase - to Florida for some fishing excursions.

"I promised him when I was 11, when I made it to the next level, I'd get him a new bass boat because that was one of his passions growing up," Simien said. "He did so much to help me pursue my basketball career. That promise was kept. It was a dream come true for me to see the smile on his face when I brought it in the driveway."

Simien was in a nostalgic mood enjoying the draft in his hometown.

"I remember at coach Hogan's camp he told us the odds of making the NBA were so slim, not to discourage us, but so we'd look into other things, too," Simien said of his Leavenworth High coach, Larry Hogan. "It makes me feel good hearing my name called, being part of that .0001 percent of guys making it to the NBA. Coming from Kansas - Leavenworth, Kansas - it's a dream come true."

He remembers feeling the same elation just one other time.

"I'm really excited being a No. 1 pick," he said. "The last draft I was part of was fifth-grade flag football. I was the No. 1 overall pick at the quarterback spot. I was pleased with that and am very excited about this."

¢ Kleiza?: Missouri's Linus Kleiza, who was not expected to go in Round One, was taken two picks before Simien, by Portland.

"It did (surprise me) a little bit," Simien said. "But knowing he's a great player as well and not having confirmation from any other teams (besides Miami) they'd take me, I knew it'd be up in the air, that anyone could be drafted and I know he's a good player from playing against him two years and seeing him at a couple workouts. Congratulations to him."

"The ability to play Wayne next to Shaq and what that could mean was strong," Steinberg said. "Also character does matter especially in the modern NBA. Wayne was raised so well with such fundamental values, they felt he was an extraordinary person."

¢ Vitale happy: ESPN's Dick Vitale was jazzed about the pick: "It's a great fit, a perfect choice. This kid is a winner. What a great choice for the people down in Miami."

¢ Memories: Simien's eighth grade football and basketball coach, Jeff Smith, was one of the 200 on hand at the middle school. "I think the whole state, not just this town, knows who he is and what he brings. That's pretty impressive. It's not something new either. Even as an eighth grader we knew he was something special."