Hinrich learning on the job

Kirk Hinrich is not one to revel in his successes.

Instead, the former Kansas University guard appreciates his resiliency.

"I've had some bumps and bruises, but you shake them off and learn," Hinrich said. "That's what it's all about."

Hinrich immediately was forced onto a bumpy road in the NBA, selected by the Chicago Bulls with the seventh pick overall in the 2003 NBA Draft.

Entering a team that needed more help than he could give in a city starved for a winner, Hinrich's rookie season was bittersweet. He averaged 12 points and 6.8 assists per game, receiving the Bulls 2003-2004 Player of the Year award.

But it didn't matter. The Bulls lost -- and lost a lot.

"It seemed like my first year," Hinrich said, "that nothing could go right." 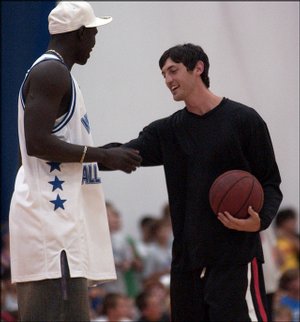 In only his second year, he was named one of three team captains, and Hinrich backed that up with even better numbers. He averaged 15.7 points per game and finished in the league's top 15 in assists, steals, and three-pointers.

But more importantly, the guard helped lead the Bulls to the NBA playoffs for the first time since 1998, which was Michael Jordan's final season in Chicago. The Bulls lost their first-round playoff series against the Washington Wizards, 4-2.

"It was a long time waiting for the fans," Hinrich said. "It just feels good that we were able to accomplish that. It was a huge turnaround -- a big improvement -- and we look for another one next year."

The team finished with the third-best record in the Eastern Conference, and Hinrich said he was pleased with the support he received this season in Chicago.

"It's a great sports town," Hinrich said. "I've just feel fortunate to be able to play in that type of city where the fan base is so good and people care about what you're doing."

On Wednesday, Hinrich played with former KU teammates at coach Bill Self's annual camp game, scoring 14 points and impressing fans with a nasty crossover drive against Mario Chalmers in the second half. Hinrich said he most enjoyed visiting old friends on campus.

"Usually when we're talking, we don't even talk about basketball," Hinrich said. "It's always good when you get a chance to talk to some of your former teammates and hang out with them, like we're doing now."

One of those former teammates was Nick Bradford, who said the game offered a unique reunion for former Jayhawks.

"It's always good to see some old folks -- people you haven't seen in awhile," Bradford said. "That's what makes Lawrence so special."

Though now far away from the college experience, Hinrich said he kept a close eye on his former team and coach during last year's NCAA Tournament.

He called some of his former Jayhawk teammates to console them after their first-round loss to Bucknell and also celebrated when the man who recruited him, Roy Williams, won his first title with North Carolina.

"The guy deserves it," Hinrich said. "He's a great coach and a great guy. I couldn't be happier. I don't think a better individual could have won the national championship."

Hinrich and his young Bulls teammates hope to use their recent postseason exposure to reach even greater heights next season.

"This year, we had a lot of guys that have had never been to the playoffs at all," Hinrich said. "We've got that experience under our belt, and hopefully it will be valuable next year."