Instant replay officiating - like it or not - is coming to Big 12 Conference football this fall.

"The way it's set up," Kansas University football coach Mark Mangino said a couple of weeks ago, "I'm very comfortable with it."

Mangino may be comfortable with the system, but the fourth-year KU coach made it clear at Tuesday morning's Chamber of Commerce breakfast he was not a ringleader in instant replay adoption.

When one of the attendees of the Breakfast of Champions event at the Hereford House asked Mangino about it, Mangino pulled few punches.

"Early on, I told them I'm old school, that we don't need it," Mangino said. "They don't use it in baseball. I'm a baseball guy, and I believe in the human factor part of the game."

Mangino also stressed there was nothing instant about instant replay and he didn't relish the prospect of standing on the sidelines for two, three or four minutes waiting for a judgment from the press box official who will call stoppages and make the final decisions.

"I don't want anything to slow the game down," Mangino said. "With all the passing these days and stopping the clock after first downs, the games are marathons." 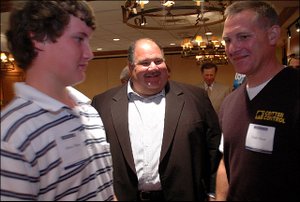 Kansas University football coach Mark Mangino, center, visits with Derec Olson, left, and his father Todd Olson after a Lawrence Chamber of Commerce breakfast. Mangino spoke Tuesday at the Hereford House about the 2005 season and fielded questions from the audience.

Indeed, the Jayhawks were involved in three games last season that lasted 31â2 hours or longer, including the Texas Tech nail-biter that concluded 15 minutes shy of four hours. Only two of the Jayhawks' 11 outings last fall were completed in less than three hours.

Still, Mangino said while he may not like instant replay, he could live with it.

"I think it will be helpful, I really do," he said.

In fact, a review official in the press box may have helped Kansas defeat Texas last season and, at the same time, may have saved Mangino $5,000.

After Texas had staged a remarkable comeback Nov. 13 at Memorial Stadium and salvaged a 27-23 victory - thanks in large part to a suspicious call and a suspect no-call - Mangino went ballistic, ripped the officiating and later was saddled with a five-grand fine by the league office.

To refresh your memory, the suspicious call was offensive pass interference against KU's Charles Gordon. The suspect no-call occurred earlier. Texas tailback Cedric Benson appeared to fumble near the Longhorns' goal, but the officials ruled he was down. A replay on the stadium's video board seemed to show otherwise.

Not too long ago, Big 12 commissioner Kevin Weiberg said the Big 12 had studied tape of 14,000 plays during last season's league games. Of that number, he said, only 34 calls were deemed reviewable and just eight or nine would have been overturned.

Weiberg didn't list those eight or nine plays, but Benson's phantom fumble surely was one of them. Notably, however, the offensive pass interference flag against Gordon was not reviewable because it was a judgment call and judgment calls cannot be altered.

During the post-breakfast question-and-answer session, Mangino also was asked how the Jayhawks did in their head-to-head recruiting battle against Kansas State.

"We're turning the tide," Mangino replied. "There are 2.5 million people in the state, and we don't have a lot of recruits, four or five if we're lucky. But everybody we went after we got except a young man who went to Oklahoma."

Mangino was referring to Brody Eldridge, a linebacker from Prairie View High in LaCygne.

Another questioner asked about the number of players Mangino has on scholarship.

Not surprisingly, Mangino was asked about the duel between Adam Barmann and Jason Swanson for the quarterback job this fall.

"Nothing has changed since the spring," Mangino said. "Competition will make them better. They're talented. It's just a matter of putting it together."

Mangino was not asked, but he did address the controversial issue of playing Oklahoma in Arrowhead Stadium this fall. Many Lawrence merchants aren't happy about KU playing a home game off-campus for the first time since 1947.

Mangino stated in defense of the K.C. shift that he rather would play Oklahoma in Arrowhead than play a nonconference game on the road.

Here are some other highlights from Mangino's speech :

¢ On depth: "Our first-line guys are pretty good, but we don't have many kids to rotate. We're playing with the same guys in the fourth quarter we played in the first quarter. We have more depth this year, but not what we'd like to have."

¢ On the three nonconference home games: "I know some are not household names, but we don't take anybody for granted at Kansas. We can't do that. We're not Oklahoma, and we're not Texas. We can't just show up and win."

¢ On losing: "When I came to KU I wasn't aware of all these losing streaks. What is Nebraska now : 38 years? We'll try to get that stopped." (Note: KU actually has lost 36 in a row to the Cornhuskers).

¢ On who will win the Big 12 North: "I don't have any predictions. I don't do that. But I'm confident. We'll be strong on defense and improved on offense. It'll be an exciting season."