"That's the standard that's been set in the women's game today," she said.

Fitting, of course, that Woodard set a mark that can't possibly be topped. Appropriate, therefore, that Woodard be allowed to reserve her spot in the Hall of Fame, which she did Saturday at the Knoxville Convention Center.

With longtime coach and fellow Hall-of-Famer Marian Washington sitting on her left, and cousin and former Harlem Globetrotter Hubert "Geese" Ausbie on her right, Woodard graciously accepted the invitation to join the most influential names in women's basketball history.

"It's a very proud moment," Woodard said. "I'm just going to just take a deep breath and really enjoy everything."

Woodard admitted being nervous, but she should know the routine -- it's the third such induction she's had. She was inducted into the Naismith Hall of Fame as a member of the Globetrotters, then again in 2004 as an individual.

"She is now a three-time Hall of Famer," said Washington, who was inducted last year. "I'll have to go through the record books to see if anybody else has been able to do that. It's amazing."

After being introduced by her high school coach at Wichita North, Duane Schmidt, Woodard took the stage with the KU fight song playing from the orchestra pit, and spoke as humble as always, as if she was a role player at Kansas instead of an all-time great. 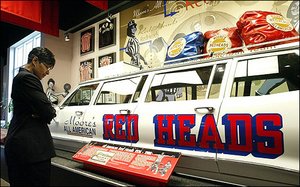 "It was survival. When I first got to Kansas, there were only two scholarships," Woodard said. "I wanted to earn one of them."

She did, of course, and went on to help Kansas to a 108-32 record during her four years in Lawrence. She later played in Italy and Japan, as well as in the WNBA during the twilight of her career.

"Every time I stepped out on the court for practice or for a game, I gave it all that I had," Woodard said. "One hundred percent, and even more than that."

After the ceremony, Woodard signed autographs, received congratulations from Tennessee coach Pat Summitt, and posed for pictures with fans and friends in attendance.

Saturday's induction for Woodard was inevitable, really. Her 3,649 points at KU is an NCAA Division One record. She was a two-time Olympian, first female member of the Globetrotters, and of course, a four-time All-American.

As the years pass, more and more standouts will make a run at Woodard's records and legacy.

"She really personifies what true love of the game is about," Washington said. "I haven't seen another player like her."