Ex-Jayhawk Woodard headed to another hall of fame

KNOXVILLE, TENN. — A new generation of sports fans is growing up, unaware of how legends possibly could be made before "SportsCenter" and sports talk radio were there to hype them.

To get a history lesson in athletics these days is to turn to the Internet or a 24-hour-a-day sports channel for help. The curriculum is diverse, but rarely does it explore women's basketball history before, say, 1990.

That's where former Kansas University great Lynette Woodard is a tough-luck loser in the measuring of legacies.

"It's just a shame she wasn't on ESPN and ESPN2," KU women's basketball coach Bonnie Henrickson said. "People would be amazed at how talented she really was. It was her size and athleticism and skill : she was ahead of her time."

Every little honor helps Woodard's jewel of a resume, and tonight she'll be inducted into yet another sports shrine - the Women's Basketball Hall of Fame. The evening ceremony at the Knoxville Convention Center puts yet another notch on her porous belt.

She already is enshrined in the Naismith Memorial Basketball Hall of Fame, and her playing days at Wichita North High earned her induction in the Kansas and National High School Sports halls of fame.

Her career is littered with similar honors.

But in the visual society to which sports fans now are accustomed, did Woodard's work - with the hoopla for women's hoops still years away - go underappreciated?

"Absolutely," said Cheryl Burnett, Woodard's teammate at KU and now head coach at Michigan. "I think she was incredible at her time, but more importantly, she has been incredible over time. 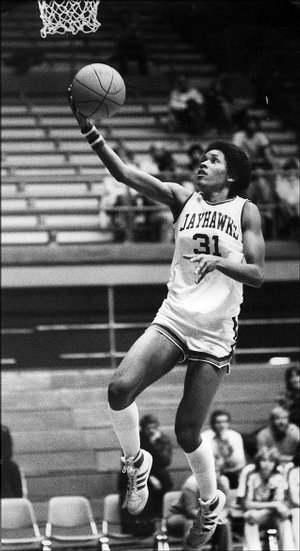 Though she played in the days before ESPN and ESPN2, former Kansas University standout Lynette Woodard - who today will be inducted into the Women's basketball Hall of Fame - ranks among the all-time greats, say those in the know.

"I'm blessed in that I've gotten to see that era up to today because I stayed involved in the sport, and I would take Lynette Woodard over anybody."

Women's college basketball is split in two eras, before and after the media boom.

Chamique Holdsclaw, Rebecca Lobo, Jackie Stiles and Diana Taurasi all starred after the television cameras started focusing on their sport, and, consequently, all are considered among the greatest ever.

Woodard, who played at KU from 1978 to 1981, was in her prime before the nation took notice, so many around her feel she deserves more respect as an all-time great than she has received.

Woodard, though, is not asking for it. She's content and never wonders how things would have been different if she would have played 20 years later.

"This is the time slot that was allotted to me," Woodard said. "I can't change it if I wanted to. I wouldn't change it - it's been great."

She was a Kodak All-American all four years, averaged 31.0 points and 14.3 rebounds per game during the 1978-79 season and led the nation in steals three times.

She was on two Olympic teams and six different professional teams, including the previously male-exclusive Harlem Globetrotters. In the twilight of her playing days, when the attention began to increase just as age started, finally, to hold her back, she played in the new WNBA for the Cleveland Rockers and Detroit Shock before retiring for good. 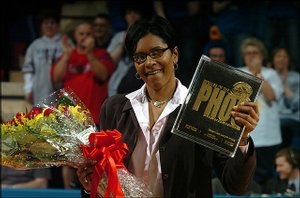 Former Kansas University All-American Lynette Woodard, already a member of KU's Hall of Fame, will join the Women's Basketball Hall of Fame during an induction ceremony today in Knoxville, Tenn.

Woodard has been a school-district athletic director, a registered stockbroker in New York and an assistant on Marian Washington's last KU teams. Now working as a financial consultant in Wichita, she randomly shows up for pickup games around the city. For a while, she pondered experimenting with a new sport - boxing.

Woodard's life is interesting and intriguing, nonstop and never dull.

"My career has been very blessed," Woodard said. "I was right there in the Midwest. I was told I needed to be in a media market, and 'You've got to be in New York or L.A.'

In the late 1970s, the best teams in America were out East - so Washington corralled the Jayhawks and took them there.

"We went all over," Woodard said. "You had to drive there. Who wanted to drive 50 hours to play? But we didn't have any support from the administration."

Washington sought out the best teams and the best players in the country for nonconference clashes to make her team better, like an early season battle with national power Old Dominion and standout Nancy Lieberman in 1978 (Kansas lost, but Woodard had 26 points and 13 rebounds).

Woodard viewed it as simply finding the competition. But Burnett thought it also was a way of finding the still-dim spotlight for Kansas and its gem from Wichita.

"Marian did as good a job as you could do," Burnett said, "at getting our team seen and getting Lynette seen."

Women's games generally drew a few hundred fans back then, but those fanatical pioneers saw in Woodard a woman the versatility not unlike Michigan State men's player Magic Johnson, who went through college about the same time.

Both had talent, quickness, selflessness and scoring ability to excel at point guard, but, with Woodard's athletic 6-foot frame and Johnson's 6-9 body, both also possessed the size of a forward. In Woodard's case, it created mismatches up and down lineups, and opposing teams rarely could do much to stop her.

"It was her size, her athletic ability, her versatility," Burnett said. "Some players can have those attributes, but if they don't have the confidence, it doesn't matter. Lynette had the confidence.

"Lynette in her prime could come in today and be the best player there is."

The numbers - and testimony - are there to support such a placement of Woodard's legacy.

Even if the attention wasn't.